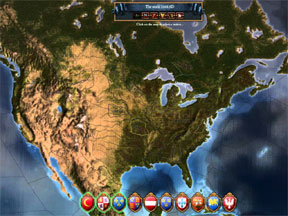 Paradox Interactive, and especially games made by their internal development studios, have a long legacy of addictive and complex turn based strategy games. Over the past three years with Game Industry I have been fortunate to play quite a few of these. This time around I got to hit the Conquest Of Paradise expansion to their blockbuster strategy game, Europa Universalis IV.

Those of you who have played the main game, know that Europa Universalis IV is a very deep strategy title, giving you access to any European nation and steering it’s destiny through political intrigue, diplomacy, research, trade and conquest. There are many paths to victory, and even more that lead to defeat.

In the Conquest of Paradise expansion, the mysterious continent of North America awaits. Playing as a European power, you get to discover America or, if you are adventurous, a completely new world randomly generated world. I thought about this a lot and my love of history pushed me to rediscover America. Of course, you can also become a Native American tribe, whereupon you will eventually have to deal with the strange foreigners coming over to explore the place you already call home.

Paradox took a lot of time to add in a large amount of information about Native American tribes. There are quite a few represented, and more seem to be added. Lucky for me, the choice was easy. I decided to follow my Ohio roots and use the Shawnee tribe in southern Ohio and most of Kentucky for my first play through.

There were quite a few features I found interesting in Conquest of Paradise. The first one was the ability for small native American tribes to migrate across the country. Over the first few turns I watched nearly every small tribe move next to bigger ones to share with them. While Native American tribes are controlled just like European powers, they aren’t as technologically advanced. This could have led to a dull game, but the developers smartly made the tribes unique.

The Native Americans have ten unique buildings that they can make use of, and it does not take too much to get them up to speed. Those buildings make huge impacts on the power and money available to a tribe. But the tribes can also migrate, which gains them a lot of power for migrating around. The tradeoff is that if you move, you lose access to all of those unique buildings that you have constructed. So there are two ways that most tribes can be successful, first by creating a stable base of unique buildings, and secondly by moving around, living off the land and gaining power by being mobile.

Of course nothing involving American history would be complete without the original thirteen colonies. Once established, or even as the Europeans are starting to arrive in mass, the dynamic changes slightly to a more combative setting. Here again, the natives could be considered weak when compared to most European nations that are strong enough to mount an expedition to the new world. But the natives are given another new power, that of federation, which can help to counteract this. With a federation, players can invite other Indian tribes to join them in a defensive pact. Then if any member of the federation is attacked, all of the others come to help. So suddenly a conquering European army isn’t facing a lone tribe, but several armies attacking from all directions. It evens things out a bit.

If you are playing as a European nation trying to get a foothold in the new world for the trade resources, wealth and prestige it can grant you, keep in mind that a seemingly small Indian tribe may actually be part of a huge federation ready to come knocking on the walls of your makeshift fort, sitting very far from home. In general I found it much better to try and befriend the natives, until of course I simply needed their land to expand.

One feature that was a nice addition was the naming of overtaken provinces. If the American settlers (once they become an actual force of their own) or a nation like France takes over an area, then the name reflects that. For example, if the French take over a territory, it might be renamed New Montreal. If the same territory is then taken over by the settlers, then the name is something different, such as New Boston.

As with most Paradox games, you are forced to think long and hard about your actions. Patience becomes not only a virtue, but a savior later on. I had my hands full when the settlers colonized. I’ll even be man enough to admit this: I lost at this game…a lot. The learning curve is steep, and it’s a challenge for European players if they have mastered the core gameplay back in Europe. For the Native American players, it’s even harder. You will need to create both a powerful nation and find powerful allies if you want to survive once the Europeans arrive. And they will, sooner or later. But I will say this, after all the strategy and the thinking and the setbacks you will face, actually winning and surviving will make you feel pretty good. Mastering the New World can make you fell like a king. So go ahead and celebrate. You’ve earned it.

The graphics are nothing short of gorgeous, with the map being detailed extremely well with scenes and little touches that bring up the images of a pristine New World. You can also turn down the details so that its just a bunch of map colors, in case you want to just get down to business, but I wouldn’t as it removes too much charm for my tastes.

Besides the pretty aesthetics, the soundtrack is a quality score that adds to the experience. Featuring a great musical score played by a real orchestra, its just pure class. As always, Paradox put a great effort into the parts of a game like this, like graphics and sound, that many companies take for granted.

While this game is difficult, it’s a lot of fun. With the random generation button you can replay it over and over without having the same experience twice. Even just playing in the default America map yields vastly different results each time, but it’s nice to have the option to go completely alien in terms of landscape layout. I highly advise adding this to your list of games to buy. You can’t really say you are a strategy game until you’ve conquered a title like Europa Universalis IV. Adding in Conquest of Paradise just puts more tasty icing on an already delicious cake.