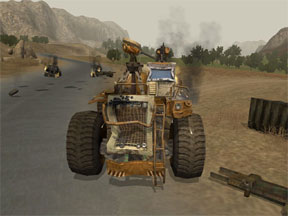 Editor’s Note: Since Hard Truck Apocalypse is still in beta, this review is not scored. However, it is our opinion that should this game get to market, that it will be one fun ride. As such, we are bringing you this special beta preview.

Once in a great while something different will come across my desk that gets me excited about the world of gaming. It’s rare, but it does happen. Hard Truck Apocalypse falls into that category.

Granted, I am a fan of anything set in a post-apocalypse type of world. But Hard Truck has elements that will appeal to a lot of gamers.

The game uses extremely simple controls. You basically use the arrow keys to drive your truck and the mouse to rotate the camera view. But let’s not get ahead of things. The game is set after the world as we know it has ended. I guess it was some type of nuclear war, though I never really found out. Anyway, the point is that the world is reduced to several small fortified towns and the no-man’s-land that sits between them.

That middle ground is mostly where you operate. There are no cars anymore, though there are some dune-buggy type vehicles. All the heavies drive around in trucks, just like you. You can configure your truck with a variety of weapons and enhancements. You have the basic stuff like machine guns and the more heavy things like lasers, mine droppers and cannons.

The physics are quite real, though you may not think this is a great thing at first because your vehicle drives like, well, a truck. Zooming down dirt roads in an armored dump truck bristling with weapons is not the perfect recipe for taking corners quickly.

All the truck models look awesome. You can configure your trucks in a variety of paint styles so those on the road won’t forget you. As your truck takes damage, bullet holes and small fires become more evident, so you know when you need to get to a garage, which is present in every town.

Towns contain not only garages, but also bars where you can get missions and raise money. Missions consist of delivering cargo, killing someone, protecting an area against raiders and a variety of other objectives. You get money if you complete the missions, which can be used to make your truck better with more fuel capacity, more armor or better weapons. Eventually you may even be able to purchase an entirely new ride.

There are several different styles of trucks, with each one reflecting a slightly different play style from light and fast to heavy and packing plenty of firepower. Even slow and heavy trucks can eventually be brought up to speed with enough upgrades.

Combat is mostly of the point and click type. You have to zero in on an enemy using your mouse, while still steering your vehicle with the keys. It’s a lot easier than it sounds and becomes second nature after a little while. The facing of your truck also counts, since while some turrets can fire in all directions, some can’t point directly back (because doing so would damage your own vehicle) so you need to jockey for position.

In addition to doing jobs, you can also make money by becoming a trader. The game records the prices that were prevalent at different towns you visit, so you can try to buy low and sell high. In a lot of ways this is like those space-based privateer-type games, except the empty space between towns is mostly comprised of dirt roads and ruins of formerly great cities.

With the right mix of packaging and advertising, Hard Truck could be a fun hit for PC gamers that don’t have a lot of titles like this. Every kid has played with Matchbox or Hot Wheels cars and fought them against one another. This is just an extension of that.

There are only a few negative things I would say about the demo I played. First, the developer Buka is Russian and as such, the English translation in some places is difficult to understand. At one point in the game I installed a laser weapon that was called a "fagot." Perhaps a once over of the text might be in order. In fact, hiring an English-speaking editor to go over all the dialog is a must. Secondly, because it is a PC game, there are times when you are doing things like holding down the handbrake while turning that caused our test system to beep due to putting in more input than it could handle. And finally, the character models look really odd. Every person looks like they have some sort of an odd white plastic face, which is even creepier when they try to put in details like facial hair. Pull all that junk out and drop in realistic-looking models if you want your audience to believe in their character and the world. Hopefully, those are just place holders in the demo version.

Currently the word is that Buka is really looking for a publisher for Hard Truck, and we sincerely hope they find one that can bring this delightful title to market.