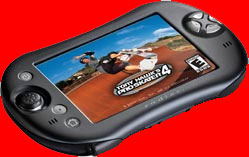 In the last few months I have been interested in the Tapwave Zodiac. Especially since I wrote my negative opinions of the N-Gage, particularly in the system’s design and game quality, I have been looking for something new. At the same time, reports of a new handheld console created by a group of former Palm employees were surfacing. My initial impressions were good, and the thought that crossed my mind was "it’s got potential."

The potential peaked my interest as I longed for my reviewable Zodiac to arrive, and finally after a meeting at E3 I as able to get my own Zodiac unit. Was I right when I said that it had potential? In most cases I would say the answer is a resounding "yes."

As mentioned before, Tapwave was founded by a group of former Palm employees who wanted to release a Palm-based handheld designed exclusively for gaming while keeping the key features that made the Palm series a success. At its heart the Zodiac is running a modified Palm OS version 5.2 on a 200 MHz Motorola ARM9 processor backed up by an ATI Imageon graphics accelerator. Two versions of the Zodiac are available: the Zodiac1 has 32MB of embedded RAM while the Zodiac2’s memory peaks at 128MB.

One element that is immediately noticed on the Zodiac is its brilliant display. At 480×320 in 16-bit color, it is easily one of the sharpest displays I have ever seen on a PDA, despite my limited PDA knowledge (the only two PDAs I have ever used was a black and white Palm IIIxe and a Pocket PC based HP Jornada). The display easily eclipses that of the Game Boy Advance and blows away the N-Gage.

In conjunction with the ATI Imageon card, the Zodiac incorporates the X-Forge 3D engine which runs 3D games at a decent pace, as can be shown in Spy Hunter and the pack in game Stuntcar Extreme.

Control is also designed to be more of a game console than a PDA. An analog controller can be used as a 5-way navigation button for Palm applications and also as a game controller. The controller response is quite good most of the time. There were some cases of controller drift on occasion (I mostly noticed this while playing DOOM 2 where it seemed like the controller wanted to keep turning). Four action buttons are set in the standard PlayStation control scheme, as well as two shoulder triggers which took a little while to get accustomed to.

Exclusively to the Zodiac is a "home" button which leads back to the main OS interface, as well as a "back" button located below the analog controller. As is common for any Palm interface, the Zodiac does feature a touch sensitive screen which is quite accurate. I haven’t noticed any errors with stylus configurations yet.

In addition to the embedded memory mentioned above, the Zodiac also includes two expansion slots. Both of which can support cards of the SD and MMC formats, but the second slot can also support SDIO cards. Built in Bluetooth accessibility is also available.

The sound capability of the Zodiac is also impressive, running on Yamaha speakers. I tested out several of my MP3 files with highly impressive results, and when it came to games, the sound quality was equally impressive.

The only concern I had with the enclosed Tapwave software involves the Kinoma video player. While it is able to run video on my Zodiac, the file needs to first be converted into a format that can be read, and only Quicktime and MPEG videos can be converted. Attempts to convert Windows Media files were unsuccessful. It would have been nice if there was an ability to directly play these files without conversion first.

Initially the Zodiac’s launch lineup cannot be beat. How many systems can brag about having over 20,000 titles available at launch? Not many, but when you’re running a Palm OS, that honor can easily be upheld.

As for titles that are exclusive for the Zodiac, they are more limited for the time being, but what has been seen was impressive.

Tony Hawk’s Pro Skater 4: Take the Game Boy Advance version and up the graphic detail, and you got what this game is.

DOOM 2: A pixel perfect transfer of the PC classic. Thanks to the high resolution of the Zodiac, it is definitely the best looking handheld version of DOOM.

Spyhunter: Based on the PlayStation2 remake, this game showcases the 3D capabilities of the ATI Imageon and the X-Forge engine.

Stuntcar Extreme: Another game that takes advantage of the 3D capabilities, and comes packed in with the Zodiac.

More titles are in development for the Zodiac, including Neverwinter Nights and Street Hoops. From what I can tell the Zodiac is here to stay.

How would have thought that an ambitious product from several employees of one of the largest PDA developers would turn out so well? The Zodiac is an amazing piece of hardware, and even with the uprising of new handhelds displayed at E3 (the PSP, Nintendo’s DS, and the Gizmondo), Tapwave has nothing to fear.