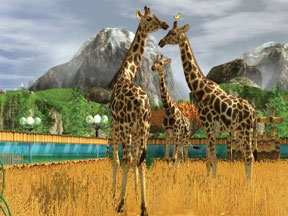 Simulations have been a staple in the industry since as long as computers have been able to play games. However, in recent years their popularity has been in decline in favor of the less complex casual-type of game that everyone can play. Then again, if more sims were like Wildlife Park Tycoon, they might recapture some of their audience that has slipped away.

Wildlife Park Tycoon does everything right in terms of a simulation. And that begins with a robust tutorial that so many games are lacking. When you start playing, you are given a position of a visiting researcher working at new zoo in Africa. Your guide is a local who will show you the ropes and help you get an idea about how to properly care for animals within your facility. This is done in very slow steps and with full voice support, so there is no danger of anyone getting lost. There are several missions like this that cover both the basic and advanced aspects of building and maintaining a perfect zoo park. This game could have easily gotten a Hard difficulty rating were it not for the awesome tutorial bringing it back down to medium. Sims are always going to be harder to play than say, a shooter or a racing game, but a solid tutorial can make a huge difference.

At the core of the game are the animals. They are rightly the star attraction here. They are also pretty smart, and if you give them enough resources, they can more or less take care of themselves. Situations will arise like in the first tutorial where a mother dies during birth, and you need to find a surrogate to take care of your new zoo baby. But a lot of keeping the animals happy is simply providing them enough space, the right kind of habitat, food and water and members of their own species to hang around with, depending on the likes of a specific animal. Herd animals for example are only really comfortable when there are a lot of them together, while predator-types sometimes like to work more or less alone. Besides buying food, you also need to think of your animal’s mental health, which can be kept high by adding things like toys and scratching posts to their enclosures.

And what a group of animals you have to choose from. Lions, tigers, elephants, giraffes, zebras and bears are available. They all look realistic and behave how an animal of that type would either in the wild or in captivity. There is even a host of special endangered species that you can acquire once you have the reputation and the money to do so. If you can breed pandas, snow leopards and rhinoceroses for example, not only will you attract more visitors, but you get the joy of watching them grow up from babies to full grown animals.

Included in the game are marine animals too, which are particularly fun to play with. Sorry, I happen to be particularly fond of penguins. It’s great to be able to build elaborate pools for your penguins and sea lions and then watch them frolic. I once built a huge series of interconnected pools so that my marine animals could swim anywhere in the entire zoo, which really thrilled my visitors. Just be sure to keep the pools well-stocked with fish, as the penguins need to eat just like every other animal in your facility.

As a final feather in your animal-collecting cap, some levels allow prehistoric creatures, brought back to life by cloning DNA. If you can prevent a Jurassic Park type of situation, you can create a very popular zoo using wooly mammoths or saber-tooth tigers.

The second part of the game involves a more or less traditional business simulation. All that animal food costs money, as does everything you build and construct in your park. You have to make sure that you are making money. Only by turning a profit can you really expand your facility, help the animals to thrive, and perhaps expand operations to new cities or even new continents.

The final part of the game goes hand in hand with the business aspect. How do you make money? By attracting guests and keeping them happy. I actually thought this was almost as fun as raising the animals. There are a lot of cool attractions that you can build, like jeeps that ride on tracks through your park, or special trains and monorails. If you can get your trains to run very close to the animals, visitors will be thrilled. Just make sure you don’t get them too close. The saber-tooth cats love it when you get too close.

Keeping visitors happy also means putting in shops. Be sure you have a souvenir shop near your endangered species habitat, or an ice cream stand and a soda machine at the end of a long nature walk. Then you can sit back and watch as your visitors pour their money into snacks and knickknacks like zoo balloons. And that means more animals, better care, and an overall cooler facility.

There are two ways to play Wildlife Park Tycoon. First there is campaign mode, where the tutorial (which can be skipped if you really want) resides. There are a lot of scenarios to choose from once you get the hang of things. You will be opening up brand new zoos from scratch, helping established ones expand into new areas, and rescuing facilities that are in trouble for a variety of reasons.

There is also sandbox mode, where you can create an entire new zoo from scratch. Zoos can be created that follow themes, or you can choose the environment you want to play in, from snowy highlands to steamy rainforests. Campaign mode offers well over 60 hours of play, or more if you really love a scenario and want to keep going after meeting the baseline objectives. But sandbox mode offers play that is only limited by your imagination. I started a sandbox game and didn’t finish with what I consider the perfect zoo (the one where the penguins can safely swim from the parking lot to the back of the savannah nature walk and everywhere in between) for two weeks. Now I’m thinking I may try to incorporate some type of ride to follow the penguins on their journey, as if the lines to get into my park were not long enough!

Wildlife Park Tycoon is a very fun game on a lot of different levels. It’s a very detailed simulation at heart, but not one that is overly difficult to pick up, thanks in no small part to a detailed tutorial. Business sim heads can get a lot out of it too, though it probably would help if you like animals since they are the stars here. However you play, the game offers more replay value than any title I’ve popped into my PC short of an MMO. And for $20? That’s less than dinner at one of my zoos. This game is one of the best deals going.