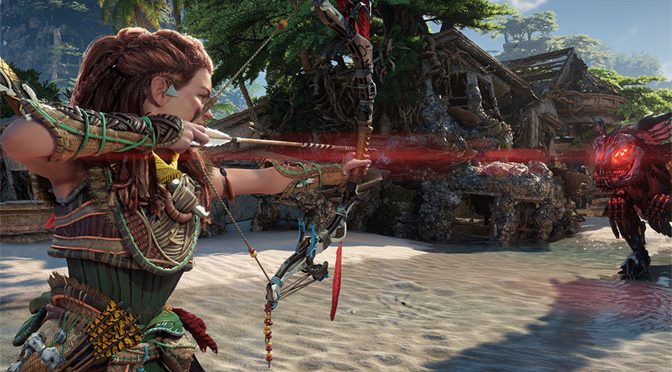 Hey all I’m back with the review of the sequel to Horizon Zero Dawn. It’s Horizon: Forbidden West!

Plot: The story opens up with Aloy searching for a backup of GAIA, the terraforming AI that Elizabet Sobeck created during the end of the modern world we know to save a seed of Humanity. From there we’re taken on a roller coaster series of events in this middle entry of a planned trilogy. I won’t go into details, but almost every thread left hanging at the end of Zero Dawn is tackled and I enjoyed the hell out of it. 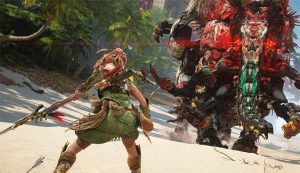 Honestly, the Horizon Zero Dawn story was extremely interesting and well done, and it instantly shot up to be in my top 100 favorite stories of all time. Forbidden West only made my opinion of its spectacular nature even more firm. Whether it stays that way by the end of the planned trilogy remains to be seen of course, it could turn out botched like Mass Effect 3 was. But let’s hope we keep a good thing going, because the first two games are extremely epic so in many ways.

I’m also not going to mention characters this time around except to say we see a lot of familiar faces and the entire cast, from minor side quest characters to major story characters were all incredibly well done. 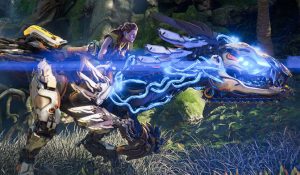 Gameplay: Forbidden West takes almost everything from Zero Dawn and improves upon it. There are a few missteps, for instance while inventory management is now a thing of the past with the inclusion of the Stash, which takes every extra item you get and stores them for later. It sounds good, but it’s not pulled off perfectly. One issue is that you can still waste ammo for your various ranged weapons when creating more. Having the extras stored in the Stash would have been an incredibly nice addition. I know for a fact that’s possible because you can pick up some free ammo thrown out by NPCs during battle, and if you’re already back to full ammo it’s stored in the Stash. 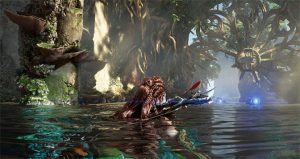 Another improvement is the inclusion of various melee combos, although you definitely should practice them at the various Melee Pit side activities as they can be a little finicky. Melee in general is still greatly improved however in general and it no longer feels tacked on like it was in Zero Dawn.

Another glaring issue I have is that Aloy seems nerfed in Forbidden West. One is to only be able to utilize a set number of traps and tripwires, it starts off at two total, and gets improved to four with passive improvements via the skill tree. That can be further improved by using certain armor sets to gain more, but honestly, it was highly restricting to my playstyle to not be able to set up tons of traps in advance like I used to in Zero Dawn. 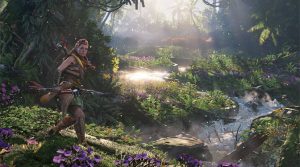 Another inexplicable nerf is the loss to permanently override enemy machines, although you are finally able to do this in the late game if you pick up the correct gear, though it will be a while before this happens. The max time is again improbable via the skill tree and gear, but it definitely made encounters not nearly as open ended as before. The exception to this is the four mount capable machines, but you really don’t want to get those killed as you can’t summon another one without going out and overriding a replacement as Aloy has also lost the ability to just summon a replacement from the ether like she could in Zero Dawn. 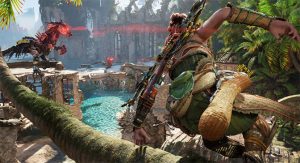 But just because those are issues that I had with Forbidden West doesn’t mean I didn’t enjoy the game. It just could have been a little better. Honestly, I love the gameplay overall, and its inclusion of underwater areas was pretty well handled. Going under the water removes your ability to fight back, so you have to be pretty cautious and sneaky if enemies are about underwater. And all the new machine enemies were just amazing to behold, and of course to fight against. 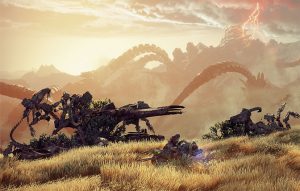 Art: Forbidden West looks amazing running on a PlayStation 5, and if you have a 4K TV then be prepared to be blown away. This is one of the best looking games for the PS5 right now. Everything is incredibly detailed, from the facial models of characters having age lines to the addition of environmentally appropriate effects on characters like the beads of sweat on Aloy and others when traveling through a desert. I enjoyed the visuals of Forbidden West immensely, so much that I really enjoyed just wandering around the world looking at all the various sights. 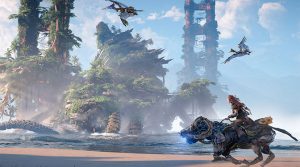 Music: The musical score is great, in particular I enjoyed the new version of the song “In the Flood” used during the title sequence. The musical score wasn’t as varied as other games can be like various Tales of or Final Fantasy, but it was never poorly handled and certainly better done than most.

Overall: Horizon: Forbidden West is an excellent sequel that vastly expands both the gameplay and setting first introduced in Horizon: Zero Dawn. This may end up being one of my favorite games of the year, and it’s definitely worth playing, especially on the advanced hardware of the PlayStation 5.

One thought on “Horizon: Forbidden West Does Not Disappoint”