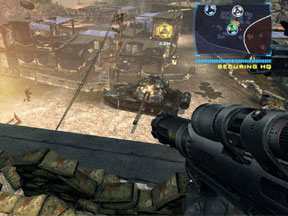 There is nothing quite like playing a shooter. It allows gamers to experience the intensity of guns blazing all around, while at the same time keeping players safe in the comfort of their homes. Shooters can take place in every kind of setting imaginable. Everything from being a WWII soldier to discovering a dystopian society underwater has been conceived as a backdrop for a shooter. Frontlines: Fuel of War takes a different story though; you are thrust into the middle of a war for oil. Hmm"now why does that sound familiar?

Frontlines: Fuel of War takes the scenario that the world is running out of oil to an extreme. A massive economic depression has hit the United States because of the lack of the black liquid. Per-usual, the United States is fighting an enemy meant to represent the Soviet Union, known as the Red Star Alliance. While the story is interesting enough, the main objective it serves is to give gamers a reason as to why they are killing enemy soldiers.

As is the case with most shooters, though, the game’s focus is not on the story, but rather the gameplay. Frontlines: Fuel of War has two main components to its gameplay: single player and online. While you may be sitting there saying, "No kidding, genius," I can tell you that the single player and online modes vary to the extent that they feel like completely separate games.

The single player mode is where the game’s story comes from. The main function you serve in the story is to find and secure the all too scarce oil fields. During missions, players may be required to capture a certain building, secure a landing zone, or eliminate every enemy in a given area. The shooting mechanics work well in Frontlines. That being said, there really isn’t anything spectacular about firing a gun that hasn’t already been done before.

The gunplay, however, is not where the game shines. Frontlines features various drones found throughout the single player campaign which serve as tools of destruction. For instance, the first drone that players will encounter is a drone that hovers and flies like a helicopter. Players are able to fly the drone into a heavily fortified building and detonate it, taking out any enemies within the explosions blast radius. What makes this unique though, is the fact that the drone will regenerate at the spot it was originally picked up, allowing for more indiscriminate destruction.

In addition to the drones, Frontlines also features a nice selection of vehicles to choose from. The game takes an interesting approach to the concept of vehicles, though. Players are given a selection as to which part of the vehicle they want to use. For example, a person driving a tank will be able to drive and control the turret. However, that person will not be able to man the machine gun. Another player or computer character must operate that part of the tank.

The different components of vehicular combat help to spice up the single player by giving an alternative to simply running and gunning. In order to fully realize vehicle-based combat, though, players must make the leap online. This is the part of the game that should truly shine, with up to 32 people dukeing it out for supremacy. Unfortunately, Frontlines drops the ball when it comes to online play.

One of the most noticeable and annoying problems that the game has online is terrible lag. Because the game supports so many people in one room, there is a high potential for lag, and Kaos Studios did not deliver with the game’s servers. It is incredibly annoying and frustrating to shoot at someone, see them disappear, and then reappear behind you and kill you, simply because the servers cannot handle the number of people.

In addition to issues with lag, the multiplayer can feel highly unbalanced. The main multiplayer mode is called Frontlines. Teams are required to capture certain areas of the map and hold them in order to move the frontline up. After the frontline has been moved all the way up, the game is over. Sadly, if you have a tank, you can pretty much do whatever you want without being stopped. Rockets don’t even seem to have an effect.

Anti-vehicle rockets do very little to stop vehicles. At one point, I fired three of them at a tank, each one hitting, only to be killed in one shot by the gunner. The simple solution to the problem would be to get in a vehicle and go after the tank, yourself. Ah, but it can’t be so easy. People who have been playing the game understand the strength of having a vehicle, and will immediately go after one. Naturally, you want to yell into your headset, "Wait!" But what’s this? They can’t hear you?

That’s right. They can’t. In order to chat with someone, you must first form a squad, a process that takes time away from the action. One incorrect button press can disassemble the squad you’ve created as well, so watch out.

Frontlines essentially boils down to having solid single player gameplay, and poor online play. The game’s graphics are in a similar situation. Some of them are great, while others are poorly implemented. The cut scenes in the game are well done and look great. However, there are many instances in which the story is moved along by unanimated cartoon drawings. These drawings either look like a strange, stylized story-telling method, or just a way to save cash in production value. The in-game graphics are well done, fortunately, so the cartoons can be forgiven.

The sounds in the game are solid and nicely complement the graphics. In particular, vehicles’ sounds are very well done, adding a sense of realism to them. Gunfire sounds real, but is nothing that hasn’t been done before.

Overall, Frontlines: Fuel of War does itself an injustice. It has all of the tools of a great game built into it, but fails to properly use them to their full potential. It gets 3.5 GiN Gems out of 5 for being a solid title, but for wasting its potential.