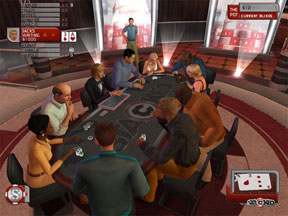 I did not really play much poker before getting this game. And it was really neat to get a hold of it since I normally only get to play and review family titles. There is nothing really in Stacked that is anti-family or anything, though some families will have a problem with gambling, which is obviously what the game is based on. But setting that aside, lets see how things went with Stacked.

When I first started playing, I also started watching poker tournaments on television. Oddly enough, the first tourney I saw had Daniel Negreanu in it. He played fairly badly, falling for a bluff and ended up losing, though it was in a late round. That did not bode well for him and his game I thought, though I was instantly attracted to his wit and charm. He certainly was the most charismatic of the players, and a lot more lively than the old cigar chomping men with sour looks and stern faces that look more comfortable in the back room of The Golden Nugget than on television.

But anyway, the game is a fairly accurate representation of a poker game, at least as far as the look and feel is concerned. Players look very lifelike, especially considering that I was playing on the PS2, which is a little behind the curve in terms of facial animations. You can’t get "tells" off the players or anything like that, but you do get a feel for the player based on how they are dressed and your experience playing with them. There were a couple players that I dreaded having to face.

Each character also has a realistic voice with some good voice acting backing them. There could be a couple more phrases per player though, because in long tournaments it can get a bit annoying to hear the same "clever" phrase 50 times or so.

The game has a simple to use interface. The game was put out running on a PS2 at a recent party and everyone who sat down to play was able to jump right in and play in under a minute.

Despite the smooth look, there are quite a few glitches that you will probably run into, at least on the PS2 version. Once in a great while the cards seem to change, and once a player completely disappeared from the table even though they had a lot of money and were not betting. They were just gone. These bugs are few and far between, but being used to completely bug-free console games, it was a surprise to find a few in there.

And now for the really bad stuff. There are two main problems that I have with the game. The first is the advice given by Negreanu. I like Negreanu, but if he followed his own advice from this game he would never have made it out of the bush leagues in the poker circuit. I played several games where all I did was follow his advice. And I never placed better than sixth. He advises some silly things and every time I listened to him and made a big bet, I got burned.

But the biggest problem I have is the difficulty. You can play on Easy when you are just doing a pickup game, but can’t change the level that I could tell in career mode. You start out in the drab Battleborn casino and the only way to get out of it is to win a certain single table tournament. The game is setup so you can only bet as much as the current blind. So if you get a royal flush in the opening rounds, you are only going to be able to bet like $10. Then later in the game the blinds are huge, so you might get (and for me it happened all the time) say a two and a seven off suited, but have to give up $500 or $300 if you are the blind. There is not as much skill in a restricted game like that where you are handicapped in the beginning but forced to play in the end.

Plus you have nine people at the table. Anyway, I played the same tournament over 30 times, including those two games where I listened to Negreanu, and never came in first place. The end result is that I was never able to advance to see the new environments or unlock any of the pro player images that are supposed to be stored in the game.

I even brought in some real poker players I know to help me out, but the best they could place in that game was third. Considering that one game is the key to unlocking just about everything else, the insane difficulty level is very frustrating.

Also, as a newcomer to poker, the game does not teach you very much. The advice from the pro is extremely basic. He will say something like, you should bet big and try to win the blinds here (which is often wrong by the way since the computer AI – at least one of the nine players at the table – will call your bluff every time). But anyway, you are rarely told why you should be doing what the pro says. If you are a poker pro, you probably don’t need the advice anyway, so the only people who will solicit it are those trying to either learn the game or improve their weak game. As such, it should be a lot more interactive.

There is a series of movies you can watch that show you how to play, but bringing that interactivity into the game instead of presenting it as an instructional video that is kind of like a separate part of the title would have taken it from average gameplay to truly stellar.

If you like to play poker and really know what you are doing, you can probably have a great time with this game. But if you are a novice, you might want to look elsewhere until you earn your chops. In the end, Stacked is kind of like having two pair with kings high. It’s a respectable hand that a lot or players would want to have, but it can also be beaten by a lot of others.

It earns 3.5 GiN Gems, a respectable, though not spectacular, ante.