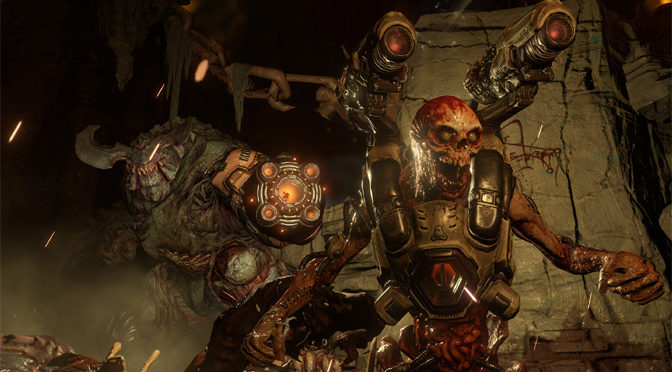 I never thought I’d be saying this, but we may already have one of my top five games of the year. Here we are, talking about a reboot, which was originally meant to be a sequel, that has been in a state of development hell for years. The way things were going, I thought this game was going to be a disaster, or I never thought I’d be able to see a new DOOM game.

And then I finally played it…holy hell is it good.

We all saw the gameplay reveal at E3. The gunplay, the visuals, the brutal “Glory Kills.” And when it was done, I wrote in my review of the Bethesda press conference that DOOM was “the snuff film that I want to play so badly.” Now here we are, it’s May 2016, and after finishing the approximate 10-hour campaign, I look back at the way the game played, and I’m not only satisfied with the experience, I’m ready to go through it all again!

While many people did not like the way DOOM 3 went, in moving towards a survival horror type game with a detailed story, I did enjoy it a bit, and would have been fine if the reboot did that as well. But no, what id Software did was start you right into the action, strapped to what looks like a coffin, only to rip yourself out, grab a demon by the head, and smash it onto the coffin. Then after falling out, you pick up a pistol and shoot two more demons before suiting up to find out that you’re in the midst of a demonic invasion of Mars. While there is not much in dialogue until you hear from the cybernetic head of the UAC, Samuel Hayden, the action more than makes up for it.

And what makes it even better is the way the DOOM Marine reacts to all that he hears; he does not care at all. No matter what Hayden tells him, he always responds in a violent matter, whether he throws a video monitor against a wall or punches out a control panel, you know all he wants to do is kill, kill, kill. And that in the end is what DOOM is all about.

DOOM (with the exception possibly of the third game) was always about fast paced run and gun. The new DOOM, expected to be one of the year’s top grossers, also consists of another feature, rip and tear. Yes, demons can be gunned down like before, and health and ammo pickups are there, but to really succeed in getting more of these power ups, you have to get up close and personal. When demons take more than enough damage, they will start glowing. By getting up close and pressing the right analog stick, a brutal “Glory Kill” is executed. They can be something as simple as a violent punch, but some of the kills can get downright gruesome. It could be a curb stomp, ripping a head in half, or even going as far as ripping out a rectum and feeding it to the same demon. The kills are just insane. They almost remind me a bit of another, perhaps grossly underrated, reboot: Splatterhouse 2010. But as I said these special kills have a huge benefit, as they will release more health and ammo pickups than normal, depending on the brutality of the kill.

In addition, every weapon that you’re used to in DOOM has made a return. While they function great by themselves, as we’d expect, they now have up to two mods that can be added and hot-swapped when necessary. I found the best ones available are for the heavy assault rifle which can now fire small rockets (at the expense of twice the ammo per shot) or emitting a heat pulse from your plasma rifle after firing several shots. In addition, after each mod is fully powered, a special mastery challenge can be unlocked. Completing it will unlock the true potential of the mod and makes the weapon its own.

The player’s armor suit can also be modded. In addition to acquiring “argent modules” that increase health, armor, and ammo capacity, runes can be added that will add special perks. These perks must be earned by completing a challenge, such as collecting a set number of items in a short amount of time, or gunning down a set number of demons with a specific weapon. Up to three runes can be armed at one time.

Visually the game is jaw-dropping. I didn’t expect the Xbox One to handle a game as graphically impressive as DOOM, let alone keep the campaign running at 60 frames per second. Sure there are drops here and there when the action gets very intense but it never seemed to drop below 30. id Tech 6 is an amazing engine and I really hope more games take advantage of it, as I felt the previous engine (which debuted in Rage) was not used to full potential.

As for sound, guns sound like they should in a DOOM game, though I will admit that I do miss the powering up sound that the plasma rifle did in DOOM 3. Voice acting is limited to both Hayden and the main antagonist, Olivia Pierce. There are also some pretty funny public address announcements from the UAC that seem to take joy in researching demons and Hell. But it’s the heavy metal meets demonic choir musical score composed by Mick Gordon (of Killer Instinct Season 1 and 2 fame) that makes the sound package in the end.

I know I sound like I’m gushing over how great the campaign is in DOOM, but it’s not perfect. There are elements of platforming in the game that do tend to slow down the action at times, and at first some of the environments were rather confusing to navigate. That was, until I found that where I needed to go was always highlighted in green. Also a double jump ability will be earned that will make traversing the settings much easier. It will also help to find all the hidden secrets that the game has. There are tons to unlock, making multiple trips to Mars and Hell a must.

Also, load times can be a pain, especially after getting killed and have to load from a checkpoint, which will happen a lot, because even in Hurt Me Plenty difficulty, the game is brutal. I don’t even want to think of how difficult Nightmare mode will be, and beyond that, another unlockable difficulty is available in Ultra-Nightmare, where are you given ONE LIFE to complete the game. That’s right. You die, it’s game over, no continues or checkpoints at all. That’s right, perma-death has arrived in DOOM, and I’m sure there will be runs on Twitch and YouTube ready to take that challenge on, but I know I won’t have the guts to do it!

And even further, once the 10-hour campaign is over, there is still tons more to play, and even create. DOOM 2016 includes Snapmap, a creation tool that allows players to create their own special environments and game rules. Some of the levels I played were quite impressive considering the tools used. There were even maps of the iconic E1M1 and E1M2 from the original 1993 DOOM, and while they are not pixel perfect representations, the feel is still there, and I’m quite impressed. Hopefully id will improve on the creation tools to make the experience even better, but so far, Snapmap is quite the technology.

Not since Wolfenstein: The New Order (ironically another Bethesda/id title) have I enjoyed playing a single player shooter campaign like I have here. The DOOM reboot not only proved that the series is going strong, it brought fun back to the first person shooter without having to employ all the gimmicks that we see in other games. Who ever thought that going backwards would be the key to success? And thankfully, it worked perfectly. This may be the best game of 2016 so far!

Pros: One of the most fun single player campaigns ever experienced in a first person shooter. Unbelievably fast gameplay. Guns feels exactly like they would in a DOOM game. Adding weapon mods and runes adds a level of customization. Brutal Glory Kills actually add to the gameplay experience. DOOM Snapmap works quite well and provides tons of replay value.

Cons: Platforming elements break away from the frantic action. Load times can be a bit long.