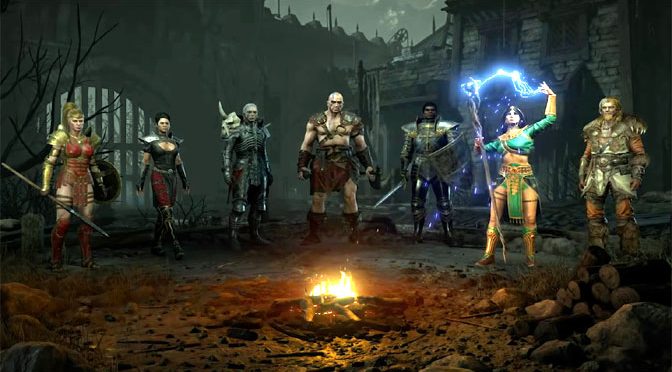 Diablo II: Resurrected was probably one of the most anticipated games to come out this year, especially for old school gamers (like me) who remember how much fun the original game was when it was released. Of course, there were launch problems with the new game when it first came out, and the sad thing is that most of them could have been easily avoided by taking some simple steps like upgrading the servers for a modern title, not forcing those who wanted to play locally to wait in an online que (or even have a Battle.net account for that matter) and generally just resurrecting the backend as well as the core game.

Thankfully, most of the launch problems seem to have been solved. We are not seeing more than about a minute or two wait in the que now, and sometimes experience no wait at all. So, we can move ahead with the review and maybe pretend that never happened? 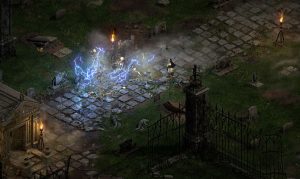 Diablo II: Resurrected includes everything that was released as part of the core game as well as the Diablo II: Lord of Destruction expansion (which originally had to be purchased on a physical disk as there were very few true DLC packs back then) so you will start with everything including the Assassin and Druid characters. The game is playable on the PC (exclusively through the Battle.net service), the PlayStation 4 and PlayStation 5, the Xbox One and Xbox Series X, and also for the Nintendo Switch. 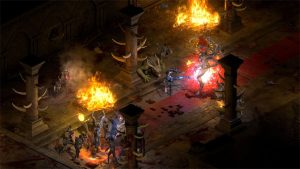 The graphics are fully upgraded for all platforms, and it looked great on our PlayStation 5 where it was reviewed. If you are playing on the PC, you can get up to 4K resolution, by far the best option if you are fully into graphics, though given that this is a remake of a game that ran in 800 by 640 resolution, going to 4K may be a bit of an overkill.

One of the features that Blizzard also added was online co-op. You can have up to eight of your friends join you in the same online game instance. Right now there is no cross play, though it’s on the list of future improvements. The one decision that really burns me about co-op is that Blizzard didn’t include any option for local co-op. That is astounding given that Diablo III has it, and lots of people enjoy playing couch co-op with their friends and family. My wife and I have beaten Diablo III many times together, and were looking forward to doing the same thing with Diablo II: Resurrected. But sadly, unless Blizzard decides to add that feature, it’s not happening. Again, I think this is a terrible oversight, or at least a missed opportunity. 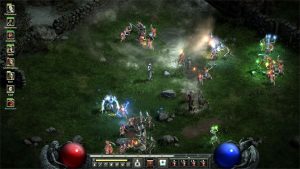 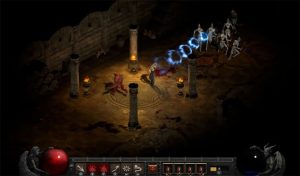 Graphically, the game of course looks so much better than before. Make no mistake, this is still not a modern game. The graphics do look a bit dated even now. And the primitive level designs also give it away. They are procedurally generated, but are all pretty much squared, like dungeons and towns all have to follow a city-block like pattern. You will also run across the exact same looking buildings, shrines, ruins, fences and other terrain over and over again as you explore levels. Where the game really shines now is in some of the spell effects and combat actions. They look like they were pulled from a fully modern game. Diablo II: Resurrected looks really good now, but don’t expect all of the modern bells and whistles. 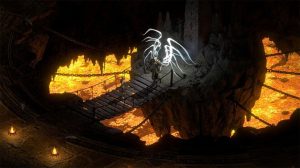 Where the game shines even more so than the graphics is in the smoothness of the gameplay. Your character really flows across the map and it does not matter how many enemies (or allies if you are playing a summoning character) are on the screen at the same time. In terms of smoothness, it’s definitely on par with Diablo III, or any other modern action RPG for that matter. Again, I just wish the seat on my couch beside me was not so empty.

All of the sound has been redone as well as the graphics. Most of the dialogue in the game is voiced well (although the scripts can get a bit long winded – a holdover from the original game). The music has also been fully remastered and sounds pretty good. You probably won’t notice it while you are playing, but it’s kind of designed that way. The game would certainly be worse off without its accompanying soundtrack following you around as you travel. 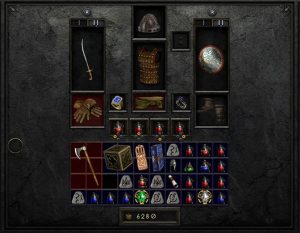 Diablo II set the standard for what an action RPG should be. It has the perfect balance in terms of leveling, and every time you pick up a magic weapon, there is a huge amount of anticipation about what you might get. Resurrected of course does the same thing, and I was amazed at how much I enjoyed (re-enjoyed) the experience of hunting around burial grounds, Lut Gholein, sewers, Tristram and everywhere else in the game’s five acts in my never ending quest to find a slightly better pair of magic boots or a better bow. Maybe a nice hat? It’s amazing that so few games have ever been able to match that magic when it comes to loot dropping. I don’t know what it is, but even Diablo III is not quite as alluring in that department. 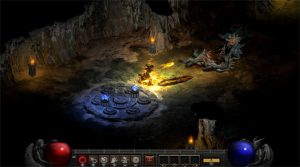 If you liked the original game, then you will have a great time with Diablo II: Resurrected. That’s pretty much a given. And if you want to see why old-school action RPGs were so amazing, then this remake is a good place to start. Younger gamers may not hold the game in as much reverence as us old timers, but Diablo II: Resurrected is still a solid title even years later. With the launch bugs finally quashed, now is a great time to jump in and take on the forces of hell for yourself, and maybe also loot yourself a nice pair of magic boots or a jaunty hat.

Diablo II: Resurrected earns a respectable 4 GiN Gems out of 5 for bringing back a true classic.