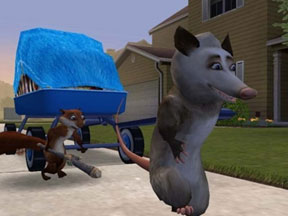 If you missed the Over The Hedge animated movie, then either do your best to find a theater still playing it, or load up your Blockbuster and Netflix queue. And when you get that disappointing feeling that the movie is over, go out and buy the game.

Unlike most movie tie-in titles, Over The Hedge does not strictly follow the film. It does for the first mission or so, then pulls a "one year later"" trick so that you can keep doing the same basic things without messing up the plot you probably saw in the theater. The game’s stars are the cute and snarky animals who awake from hibernation to find that their woods have been bulldozed to make room for a huge suburban housing development, leaving only a tiny pond and a spit of land surrounded by tall hedges. To forage for food so that they can survive the next winter, they have to go over the hedge.

This puts them at odds with the neighborhood home owner’s association president, who becomes the "wicked witch" of the game. She in turn hires a professional exterminator who does most of the dirty work. There is also a bear in the film who has a problem with one of the animals, but in the game he becomes friends with them – another departure from the movie’s plot.

The four playable characters in the game are Verne the Turtle, RJ the Raccoon, Hammy the Squirrel and Stella the Skunk. Each one has slightly different characteristics and weapons, and you can switch among them as much as you want back at your "hideout." Generally though, they all play about the same.

The game starts out with the animal gang raiding suburbia for food. Only this time, Dwayne the Exterminator has fortified the neighborhood with laser traps and other insane devices aimed at catching or killing the animals. You have to jump over the beams to avoid setting off the traps, avoid walking too close to sleep cloud generators and walk very slowly though motion detectors. Otherwise a trap will spring that might cause damage, though you often can still dodge out of the way.

Even though you are sometimes injured, there are plenty of ways to heal during the game. Picking up nacho chips will add one point of health and eating a slice of pizza will fully restore you. Thankfully, almost everything in the levels from deck chairs to birdbaths to blenders is breakable. A quick whack with your animal’s golf club, stick, plunger or weapon of choice and the object will shatter. Objects contain lots of different things, including the much needed chips and pizza. There are also hats hidden in some places, which besides looking silly when your turtle or skunk is wearing it, will provide five points of armor for your character.

Thankfully, Hedge is one of those games where two people can play it at the same time. If you are alone, then the computer will take control of the second animal for you, mostly doing ranged attacks and trying to stay out of trouble. With a single click of the control pad however, a second player can jump in and take over. Playing with two people is great fun and really adds an element to the game. You can even perform special moves together like leaping on top of your partner’s back to create a totem pole of fighting energy that few bad guys can defeat.

Oh, I did say bad guys, didn’t I? Unlike the movie, in the game the exterminator has a special weapon. When he captures animals like rabbits or moles or rats, he equips them with little mind control helmets. Then he sends them out against your little group, so levels are full of other animals that attack you. Beating them up is the only way to get through certain areas.

As you complete levels you steal more gear for your little woods hideout. Projection televisions, popcorn machines, a huge hat collection and other modern conveniences provide distractions for you to play with between missions. But you also unlock several mini-games.

There are three types of mini-games. The first has you hitting golf balls at different targets on a range. You try to accurately hit more targets than your opponent. The second has you racing RC Cars, which is a fairly fun race-type game. But the third is the crown jewel of the mini-games. It’s a smash up derby using golf carts. I played this for hours once it was unlocked. Besides seeing the little animals driving the carts, which is great, you have to race around and grab power-ups like the ability to armor your cart for a time. When you smash someone they will yell something funny too.

As you play, you will unlock more golf courses to fight on, as well as more RC Car tracks and more ranges as well. It’s a great reward for completing missions. The golf cart missions and the RC Car racing is the only part of the game that splits the screen, but this does not detract from the gameplay.

The voice acting in the game is some of the best I have heard. Although the big name actors from the film don’t make an appearance here, the voice actors do a wonderful job impersonating them. Paunita Nichols does a perfect Wanda Sykes and Stephen Stanton does a great Gary Shandling. But even if they and the other voice actors were not trying to imitate the big screen characters, it would be a great job. They deliver the punch lines to all the jokes with perfect inflection and really will make you laugh. Credit also has to go to the script writers for coming up with some really funny jokes that were not in the movie. The original material found here is really superb.

Graphically, the game really pushes the envelope on the reviewed platform, which was the PS2. It really ekes out all it can from that system. It’s a cartoon type game based on an animated movie, so it does not have to really look realistic, just crisp and within the same style as the film. It easily achieves this.

As a final test, I set out Over The Hedge at a recent party to see if anyone would play it. They did of course, though mostly gravitated to the golf-cart smashing mini-game, which developed quite a following, and a long line as well.

Over The Hedge is an excellent game that follows the excellent movie. Suitable for adults and kids alike, the game is one of the true gems of the modern console platform. We put it in the Family category because parents and kids can easily play it together, though it could just as easily fit into the Action one without a problem. For real fun this summer, be sure that you wiggle your way Over The Hedge.