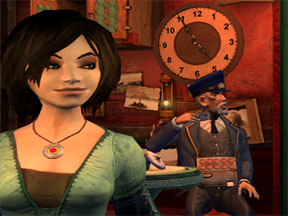 Viva Media has a long track record of stellar games, and Haunted is yet another feather in their cap. I was intrigued by the opening menu where a girl stood there and followed my mouse moves. That alone kept me amused for about fifteen minutes of so.

When I did start a new game I was instantly impressed by the graphics. Haunted is well above average in terms of genre graphics. It starts out with the same girl from the start menu running before she pulls a Youtube-worthy epic fail and falls. After a quick fade to black, she wakes up strapped to a bed at a university.

From there the cut scene continues for a little bit before you get to start your tutorial. I really had to change gears in this game. Lately I’ve played the ‘I Spy’ adventures where you just find items and move on. This one involved moving the girl, Mary, running around and finding things along the way.

This is a fascinating new mechanic that I think puzzle gamers will enjoy. There is always the goal, somewhat, of getting all these casual game players to slowly move towards becoming full-fledged gamers, and this is a good step. It feels natural and shouldn’t alienate anyone used to simply finding objects set within a big grid of red herrings. My guess is that if all a gamer was exposed to was the ‘I Spy’ puzzles in the past, then they would look at this and think that it was a pretty darn cool innovation. In any case, the puzzle aspect of the game is thrilling, and enhanced if anything by the new interface for some of the major noodle-scratching challenges.

The plot of the game is quite good, and involves your sister Emily, who died mysteriously in a train crash. Mary must unravel the truth of the matter, and perhaps bring her sister back to the world of the living.

To help out on this daring quest, you eventually meet some comical ghost comrades who can help you solve puzzles, another innovation that helps Haunted rise above the normal type of puzzle adventure. A lot of times you feel kind of all alone when playing these games. Here you have some really memorable companions. Your ghostly friends are all cartoon forms of famous people in history like William The Conqueror. They are funny too, though at times the humor did seem a slight bit forced. At other times though, it had me laughing out loud, so lets just chalk that up to personal taste.

In terms of sound, Haunted really hits the mark with top voice acting. The fact that a game like this has voice acting says volumes for why it’s sure to be one of the top in its genre. That the voices are also well-done by obvious professionals is just icing on the cake. Couple that with the musical score, which is engaging when needed and fades into the background when appropriate, and you have a well rounded package for sound.

The environments towed a fine line between realistic and cartoonish, and let me tell you that it towed it well. Everything was well drawn and well developed. All of the levels are easy to navigate, and I never ran into a single glitch or mistake, a big accomplishment given the new interface.

All the gameplay and controls were functional. There is a five second learning curve when getting used to the way the controls and emblems work, and even then, there is a tutorial to show you the way. I can’t see anyone getting lost. Personally, I really enjoyed the activeness of Haunted compared to more static puzzle games, and I’m pretty sure other gamers, even the more casual ones, will as well.

Haunted is a great game for all family members, and really keeps you entertained for hours on end. Plus, the innovation, unique for a puzzle game, helps it to stand out in a crowded field. Haunted earns 4.5 Gin Gems.