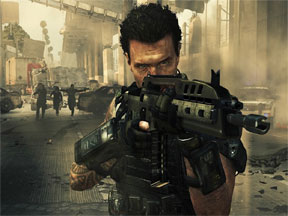 I don’t get why everyone seems to complain about the fact that a new Call of Duty game comes out every year? Yes an annual release makes it look like the same product over and over again but I am one of those who enjoys playing them. But unlike others, I am not engrossed on the multiplayer side of the game. I am more partial to the single player campaign and seeing how it unfolds. In fact, this review will only cover the single player part of the game, which is more than worth the price of admission.

After all, look at the way the game’s stories have played out since the launch of Modern Warfare. We witnessed a lot of WTF moments since then: a front row seat for a nuclear explosion, an airport massacre that drew tons of real life controversy, a complete mindwipe that makes you question everything that you do, and yes, a first person view of Makarov being hung.

Yes, the Call of Duty series keeps feeling more and more like a Michael Bay movie (with the exception that these are actually good.) But with the Infinity Ward/Sledgehammer led Modern Warfare series over (for now,) this year it’s Treyarch’s turn to take over the reigns with the third part of their Black Ops series.

Reviewer’s Note: Yes, I do consider World at War as part of the Black Ops series since the character Reznov is involved in Alex Mason’s past.

Unlike previous Treyarch Call of Duty games that center on one specific time period (WW2 for World at War and the Vietnam era Cold War for Black Ops,) Black Ops II alternates between two time periods. The heart of the game takes place in 2025, a future setting being a first for the Call of Duty series, and centers around Alex’s son David Mason. When visiting Alex’s old partner Frank Woods, they obtain information regarding the main antagonist, Raul Menendez. A Nicaraguan narco-terrorist and leader of the ‘Cordis Die’ movement, Menendez is also motivated by personal vendetta; his sister Josefina died during the 1989 raid on Panama, and the also real life capture of Manuel Noriega.

Menendez makes the matter even more personal when he abducts David as a child and encourages him to ‘suffer with me.’ The late 80s missions are shown from Alex’s point of view, with the exception of one mission that is seen in Menendez’s eyes.

The rest of the game takes place in 2025, with David ‘Section’ Mason and his partner ‘Harper’ as Special Forces agents sent head-first into a cyberattack performed by Menendez’s Cordis Die movement. During the campaign, key moments will affect the outcome of the game’s ending.

While most of the game’s single player campaign takes part in the usual checkpoint and objective based combat that we are used in the Call of Duty series, there are also five Strike Force missions. Rather than playing from ‘Section’s’ point of view, the action is controlled remotely from an overwatch perspective. Similar to a real time strategy game, units (troops, flying drones, and mechanized armor called CLAWs) are delegated orders of where to strike, but they can be controlled from the usual first person view. While they are a nice change of pace, it can be quite cumbersome to control. These missions can be skipped, but in order to get the best ending, it is imperative to finish them.

Even with the branching storyline and the additional five Strike Force missions, the game still feels a bit short compared to previous games in the series. With only eleven missions in the campaign, the game can easily be beat in a few hours. Thankfully there is also a ‘story rewind’ feature that allows you to rewind back to any mission in the game to change the ending. It is nice to be able to see a Call of Duty game make changes to evolve the single player campaign, but I just wish the main campaign was just a bit longer.

I really stress that desire, only because the story is quite engrossing. Written by David S. Goyer, it has the workings of a Tom Clancy novel with the over-the-top insanity of a Michael Bay movie. Seeing David suffer through his daddy issues with Alex, and Menendez suffer through his personal trauma over losing Josefina can hit hard, and in the end you’ll be looking at the screen in shock.

Needless to say, the single player campaign is short, but also sweet. Black Ops II does a great job at continuing the Cold War narrative the first game provided, but adding a little science fiction into the mix with the cyber warfare that might come in the near future to real life.

Back when World at War came out, I made a formal apology to Treyarch for my doubts about their work on the series. Now, four years since then, I am actually saying they may have surpassed what remains of Infinity Ward in making a better Call of Duty game.
If only it was longer.

CONS: But that seems to be a bit brief compared to other Call of Duty games. Strike Force missions can be somewhat disorienting. Graphics can suffer from slowdown at times.