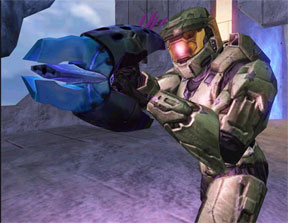 Remember the old saying ‘less is more’? Well in the case of Halo 2, more is more and Bungie has certainly delivered more. As only to be expected there are more weapons, more vehicles, more enemies and more environments to explore. There was even more hype than greeted the original Halo. Anticipation did reach fever pitch and Halo 2 had a tough job ahead of it – following up the best FPS to grace console and certainly one of the very finest on any format.

The challenge was set and Bungie has dutifully turned all the dials to 11 in all the right places. First, the graphics look beautiful, although not anything jaw-dropping or heart-stopping. Halo 2 didn’t have me standing looking at the grass for five minutes or examining shrubberies and marvelling at their 3-Dness. Some of the cut-scenes at the beginning were testing the machine to its limits and chugged a little, but nothing too traumatic. All in all, not much has changed between one and two in the graphics department, but that’s not necessarily a bad thing.

The most notable change is the lack of health packs. Reliance is now focused on the shield and once this is down you can only take a couple of shots before it’s game over. It does mean there’s more call for duck and cover, but it also means that you don’t get stuck with one bar of health having just passed a checkpoint and walked into an ambush.

Team Bungie has also taken on the negative feedback from the first game about the repetitive nature of the levels and design of the environments. It’s a problem no more. Now we have labyrinthine cityscapes to play in, serene temples floating in the middle of lakes and huge gliding platforms. Each level is distinct in character and atmosphere, some are even beautiful. They all make it more fun to play and easier to describe where you are to your mates down the pub.

The second most notable change is the story, and the fact that it’s got one. Halo 2 has got its very own fully-fledged storyline, with some significant plot twists worthy of the Oracle. That said the narrative is hard to follow at any great depth, partly because it’s convoluted nonsense and partly because Cortana’s usually telling you what’s going on in the heat of battle. Be right with you Cortana, just after I kill this battalion of Covenant.

The plot twists are significant, inspired and driven by excellent dialogue. The story also takes us to the heart of what drives the Convenant, which makes them a more interesting foe, coupled with the voyage of cultural discovery is the humor. The troops swap quips and have an endless supply of hilarious insults to shout at each other and the alien hoards mid-battle.

Improved physics means explosions send bodies flying through the air and rag doll effects see bodies lolling down gentle slopes. The handling on the vehicles has also been enhanced, which means it’s much harder to flip them these days. Better in-vehicle weapons and maneuverability means they become a vital part of your arsenal. Performing barrel rolls in a Banshee dog-fight was one of my favourite moments fairly early on in the game. You can also hijack vehicles from other characters – excellent for multiplayer action.

There are more weapons at your disposal, one of the best being the battle rifle. Similar to the assault rifle of the first game, this one has the addition of a sight – there’s nothing like rapid-fire sniping. The rocket launcher now has a lock-on feature, which makes much more sense and means loads more fun for all, unless it’s in the hands of the flood.

The addition of the dual-wield takes a little getting used to, but once you find the perfect combination of weapons it’s invaluable in later levels. In true Halo style there is a trade off in your choice of weapons. Dual-wield means you have to forgo the use of grenades, which left me with a weapons dilemma quite a few times. Depending on the two weapons you use, dual-wield can restrict your vision and sometimes I felt one good weapon and a host of grenades was the only way to go.

Somewhere between Halo and Halo 2, the Normal setting became really easy, which means I pretty much cruised the whole way through. And later levels allow you to just run away from battles, which can make it a very short-lived experience. I advise any Halo veterans to head straight to the Heroic level setting for a bit of a challenge. It also means you won’t finish it so quickly.

Bungie has thrown us a couple of controversial curve balls with Halo 2, both of which may cause consternation and celebration in equal measure. The first twist had me celebrating, whooping and paralysed with excitement. Others may feel cheated, but I’d just like to say well done Bungie for taking me by surprise.

The second area of debate is the ending and I’m still not sure about this one. I’m not going to spoil anything for anyone, but let’s just say it’s abrupt and it comes when you least expect it. Games forums are on fire with theories about the ending and why the game finishes so suddenly. I think it all comes down to whether you’re an optimist or not – some may come away feeling ripped-off and ready for a fight, whilst others might take the brevity of the experience to mean only one thing.

All in all, Halo 2 only has minor quibbles and they’re not even big enough to be flaws. It’s everything you want a Halo game to be, but with more added. It meets, but doesn’t exceed expectations and there are some classic moments that will stand enough repeated play to see me through to Halo 3. It’s not the gaming revelation that Halo gave us, but it does improve on a now familiar and much-loved formula, which earns it a 4.5 GIN gems.