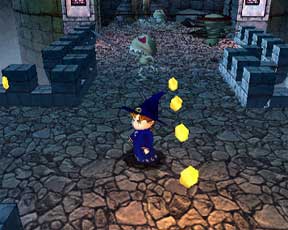 Step into the shoes of two children, Alicia is a girl dressed up as a witch and Greg is a boy dressed up in a red devil costume. The trouble is (there always has to be trouble) their best friends have been turned to stone by the Bogeyman – yeah, the real Bogeyman. What can I say, it’s scary stuff. There’s nothing for it, but to enter the World of the Dead and rescue the little blighters.

The whole game is played using both Greg and Alicia, which means there’s a small degree of strategy. Each of the children has special powers, which have to be used at different times. Alicia uses her pointy, witch’s hat as an Oddjob style weapon, can walk on ice and triggers the blue pumpkins. Greg triggers the red pumpkins and dies if he walks on ice, but is kind of handy when it comes to fire and also uses his pitchfork to great effect.

Along the way, you collect crystals, which allow you to switch between characters. The pumpkins need to be triggered by the correct character to allow you to progress. For instance, blue pumpkins will turn a river to ice when triggered by Alicia, allowing you to cross easily.

As the game progresses, the kids gain special moves and attacks at certain junctures. Alicia can hide under her hat to get into those hard to reach places and later she gains a whirling attack, which fells all foes in a sweep of her hat. Greg’s super-jump is crucial for some of the later levels, as is his dive-bomber move.

Throughout the game, Spirits & Spells delivers gothic fairytale atmosphere in spades. The graphics aren’t groundbreaking, but they are solid and offer a storybook charm that kept me playing. Alicia and Greg find themselves drifting down a misty river on ghostly rafts and avoiding the snatching branches of haunted trees, before hopping across rows of floating coffins, Frogger style.

The adventure also takes them to a haunted mansion, complete with suits of armour swinging axes, floating furniture and stairs that become smooth slopes, sending you sliding back down to the bottom. My personal favourite was scaling the outer walls of a twisted, gothic castle using wooden scaffolding and platforms that snaked their way around the turrets. The trick was to avoid the helter-skelter and its giant, rolling, stone marbles, whilst navigating collapsing floor tiles and fending off flying devils. Despite having to replay from the last checkpoint several times, I found there was enough to spur me on to succeed.

All the classic fairytale foes are present, so as not to disappoint. Expect skeletons, witches, ghouls, devils, imps, enchanted trees, vampires and pumpkin-headed bogeymen. There’s even an evil robot and the obligatory mad scientist guy with macabre laboratory, thrown in for good measure.

The gameplay combines your classic platform jumping with puzzle-solving elements, but the style of the graphics and environments sets it apart from the usual fodder. The real winner for me is the music, which just compliments the whole look of the game and gives it the Disney appeal that kids will love.

The music is reminiscent of a Tim Burton movie score, providing a gothic music box melody that pulls you along into this fairytale world. The music and sound effects can make or break a game like this, which requires repeated play. Faced with one more chorus of an annoyingly jolly digital cacophony can be enough to negate any sense of fun. Thankfully, Spirits & Spells avoids this fatal error. And neither of the kids pipe up with annoying catch phrases or banal exclamations, another trap too many games fall into trying to appeal to the younger gamer.

All in all, Spirits & Spells will appeal to kids and anyone with a penchant for all things Halloween. The levels are varied, fun and inventive enough to keep you playing. It’s not going to win any prizes for best original game, but it does deliver a carefully crafted atmosphere of fairytale and things that go bump in the night.