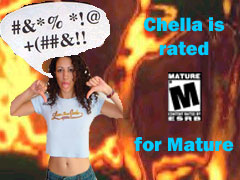 Silent Hill and Grand Theft Auto have a lot to answer for. You could probably throw Resident Evil into that mix too. Unfortunately, I am on the mailing list of a publisher who sends me an endless list of absolute garbage. This lesser-known publisher shall remain nameless because they try to make the best of a bad situation and it's Friday, it's sunny, so I'm not in the mood to make anyone cry.

The most recent travesty was a horror adventure game, which I received twice I might add. It was another game in a long list of games, which are trying to catch the crest of a wave marked M for mature. The rating itself is a bit of a misnomer, after all, it suggests that an M rated game features images, language and even themes that are suitable for the mature mind. Hmm…let us take a moment to consider the word ‘mature'.

Now, let's get back to the game (or games) in question. The press release boasted hideous revelations concerning sex, mutilations and various perverse activities, which served to cast aside every taboo in the book. Regardless of the sensationalist approach to shocking content, I was intrigued enough to have a go. I soon regretted that decision. I like point and clicks, but this was a bad example of the genre that left me uninspired to continue very far. Needless to say I got far enough to be irritated by the attempts to appeal to the mature mind – or maybe it wasn't the mature mind they were really after.

The dialogue was terrible and punctuated, no littered with needless profanities. When I'm looking at an object on a table, I see no reason why the character needs to swear whilst describing it. And throwing in a couple of heavy-handed drug references does not a mature game make – yawn.

Then there was Manhunt, the game which ironically came from the people, namely Rockstar North, who gave us GTA. Apart from the fact that it was the latest game from Rockstar, would Manhunt have really registered on our gaming radar without its shocking content? I suspect not. That said, I don't recall Manhunt breaking any sales records, so maybe the M isn't the goose that lays the golden egg the moneymen seem to think it is.

The men in suits who count their piles of money often miss the point and once again they've missed the point of the source of GTA's success. The secret of GTA is not the swearing or the fact that you can pay a hooker to entertain you in the back of a car you've just taken at gunpoint from an elderly couple. No, it's the fact that it's a free-roaming masterpiece. It's the first time it was done successfully and gamers the world over are thankful. We all knew free-roaming was the way to go, but all too often we'd had our fingers burnt by unplayable, sprawling and frankly dull attempts.

GTA's brand of Goodfellas style action only served to fuel the fires of success. The script was top notch, using the gangster vernacular with graceful aplomb and the fact that you could shoot anyone and everyone was a fantastic release. Likewise, games such as Silent Hill and Resident Evil gave us a visceral experience, which tapped into the dark reaches of the human psyche in a way that has seldom been replicated by any other titles.

The fact is that only a very small percentage of games are rated 18 or mature and even then it isn't a guarantee of record-breaking sales. Nevertheless, there is what seems to be an endless stream of band-wagon jumpers who think the clumsy insertion of some gruesomely violent deaths, bad language and misogyny will get them the crucial slapped wrist and mature rating. These bad boys of the games industry then revel in their, what I can only presume they think, is cult status, squealing in delight at how they can gross us out. Acclaim's BMXXX is probably the height of M-grabbing sadness, which thankfully didn't garner them any respect or success.

Half the time, these tragic efforts to shock do little more than annoy with their poor gameplay and underdeveloped narrative. Stimulation for the mature mind? I think not.