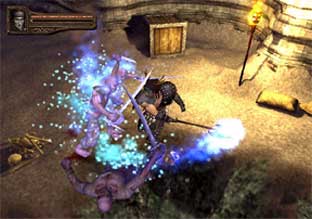 Baldur’s Gate: Dark Alliance II is everything that a sequel game should be, but hardly ever actually is.

It keeps the same basic gameplay as the original title intact, including a great two player game mode, but also adds a lot of new features to the franchise. In short, it is everything that gamers loved about the first game, but a lot more of it.

I had a personal interest in this title, because the original was one of the first games that my wife was willing to play on the PS2, and the very first that we actually sat down and solved together. Given the fact that I know at least two other couples including European Correspondent/GiN Playmate Chella and boyfriend Konami Boy as well as reviewer Chris Richards and his lovely fiancT Allison (who as of yet does not have a cool nickname) also played the game series hand in hand, it should probably get some type of couples game award or something.

The original was one of the first games to allow two people to play a quality title at the same time, with both players on the screen at the same time instead of the crummy split screen play that mostly takes place in the console world. Dark Alliance II thankfully continues this trend.

As I said when we started, Dark Alliance II basically improves on every aspect of the original. Whereas the original had three playable characters, DAII has five. Each one is rather unique in terms of the Dungeons and Dragons world and each is different from the others in many ways, which adds replay value to the title. Whether your are the upfront barbarian, the spell-wielding cleric, the mysterious necromancer, the unarmed monk or the mechanically inclined dwarf, it will be a different experience each time.

As an example of this, my wife played the game one weekend with a visiting friend from out of town. Her friend played the dwarf character, who has the ability to disarm traps in the game. But when my wife and I played later, I was a cleric and she was a barbarian. As we were jumping and dodging yet another deadly trap, my wife commented that the level we were on was much, much easier with the dwarf along, since they could disarm all the traps. So they experienced a very different game then, than later with different heroes.

There is also more of a storyline with DAII. The plot is fairly intricate and the game has some non-linear quests that players can choose to go on that don’t change the overall game. Some of these are special dungeons you can explore (some more than once as new creatures move in after you have purged the area of the original inhabitants) and some are quests that are only available to the various characters. The barbarian for example, gets to go on a quest to save a forest and is granted druid powers as a reward. The quest only comes up with the barbarian in the party. Each character has a unique quest. In a two player game, both characters will get their unique quest, and the second player can even come along for the ride.

The game is divided up in to four chapters, each of which took me about 10 hours to play. That makes the game more than twice as long in terms of gameplay as the original.

In an apparent nod to Diablo, you can now use gems you find to enhance and create your own unique weapons at a workshop in town. The process is very expensive, but worth it to build flaming axes or daggers that freeze your opponents when they hit. There are a variety of affects you can put onto the weapons in addition to also beefing them up by increasing their plusses. Combining multiple gems, you can use up to two per weapon, will also create new effects. Armor can also be enhanced in the same manner, though with limited resources, my guess is that most people will opt for the flashy weapons. I know I did, with great effect.

Which brings us to graphics and sound. The graphics in the original game were amazing for the time, but of course have been improved in Dark Alliance II. Spell effects are both felt with force feedback and also seen with some great renderings. Flame strike became my constant companion, though every time I cast it my wife would jump, thinking that we were being attacked. I don’t blame her. Between the feedback, the explosion and the brilliant fiery flash, the only thing that kept me from being surprised was that I knew it was coming each time. The soundtrack is above average, but not really amazing. It’s unfair, but I have gotten used to the great soundtracks found in the Icewind Dale and PC Baldur’s Gate games I guess. This is a different medium though, and the sound that the game has is appropriate.

If you liked the original you will love Dark Alliance II. And really, I don’t see how you couldn’t. It’s the perfect game to play with a friend or by yourself, and the multiple characters and unique quests will keep you couch-bound for a long time to come.

Since I know I will be pestered about this, I might as well begin the pressure now. Dear Black Isle, please begin work on Dark Alliance III. You’ve got a winning series here, and I for one would love to see more.