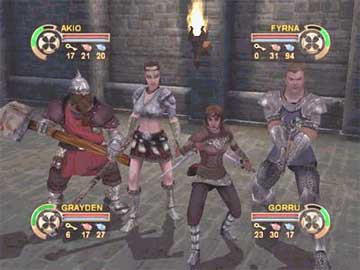 The first time I played Dungeons & Dragons Heroes, I had several friends over and we had a good time, and everything went very smoothly. The second, and subsequent time I went to play heroes, it was just by myself, and I found myself overwhelmed by baddies.

I was able to compensate, but I found the game to be balanced more for multiplayer, heroes allows for one to four players, than for single players. There is absolutely nothing wrong with this, as long as you know it going in. Basically in multiplayer and single player there are the same number of enemies, they are just a tiny bit tougher with more players.

In Heroes you play one of four characters for which at least initially, you can only change the name. They are a Human fighter, an elven wizard, a dwarven cleric, and a halfling rogue. They are heroes from the past that are resurrected at first level to battle the foe that they defeated and imprisoned over 100 years before. You would think they would be a little bit pissed about resetting to first level, but I guess its good to be alive after 100 years of lying in a crypt.

The heroes battle through countless enemies to regain their former power. The game is fairly linear as they travel though catacombs to the remnants of Castle Baele and so forth. I don’t want to spoil the surprise, but they finally reach the wizard Kaedin’s fortress. The story progresses primarily through cut scenes. There is no interaction with the characters, except some grunts during combat, and I found them rather flat. The story also progresses through non-player characters (npc) speckled through out the game.

The game follows simplified 3rd Edition D&D rules. Characters are extremely limited in the equipment they can use. For example, the rogue is the only character that can use a bow, and your expert fighter is only allowed to use swords without a shield. As you wade through countless enemies you gain levels very quickly.

As mentioned before, you start at first level and if you are not 30th level or greater by the end of the game, then you have done something horribly wrong. As you go up in levels you get to add new feats (including special moves and finishing moves), as well as points to your skill and stats. Some of the feats included are new spells for the cleric and wizard, more powerful arrow attacks from the rogue and self-bolstering moves for the fighter including a wicked 360 spinning attack.

The attacks and spells take away from your mystical energy reserves, but the game is generously sprinkled with both healing potions and mystical will potions that allow you to wade through hordes of baddies without stopping. Just keep pressing the black and white buttons to recharge. You can also buy a healthy supply of raise-dead amulets, which restore you to full health instantly when you die. Heroes offer frequent save points (though you can save at any time) where you can warp back to the closest shop to sell your loot and stock up on equipment and healing potions. What all of this results in is a game where you just walk through and kill everything that moves while breaking up barrels and opening chests without a lot of strategy or thought.

As I stated earlier I pretty much played the game by myself, but one night my girlfriend was over and asked to join me, so I had her add in a character, which is very easy. The problem was that by this point I was somewhere around 20th level, and instead of having her come in at a similar standing, the game started her out at 1st level. She did not have a lot of fun and I had to stop playing for the evening. You can of course bring in previously saved characters, but unless you have been playing as a group from the beginning, you’re going to end up with some sort of mismatch. For a game that seems catered to multiplayer, this is very poorly done.

The graphics are in my opinion not at good as Baldur’s Gate: Dark Alliance, which came out several years ago for the PS2 and a year later for the Xbox. Attempts were obviously made to make them look similar, but the animation is rougher, the characters do not look as good, and the backgrounds are not as pleasing.

Arguably the best part of the game is the audio track. The grunts and groans of the character and the baddies are all fairly well done, as are the spell and slashing noises. The voice acting for the npc’s is surprising well done.

While Heroes is certainly not comparable with either Baldur’s Gate: Dark Alliance 1 or 2, it is not a bad dungeon crawl. The character options are limited, but if you like killing baddies and leveling up really fast, so that you almost always feel like a god, then this is the game for you. After reading this review, you should have a good idea of what you are getting, and that knowledge will make the game that much more enjoyable. I rate it as an average 3 Gin Gems.