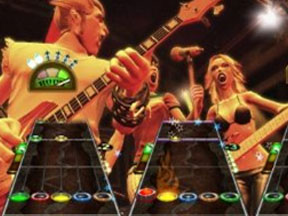 While waiting for Guitar Hero 5 to come out this September, Activision and RedOctane have kept busy with their successful franchise. After an impressive (yet somewhat flawed) first attempt at a full band with World Tour, their second band-centric release came in the form of Guitar Hero: Metallica, a title that I admit, as someone who really thinks the band sold out starting with the Black album, was quite enjoyable to play. And surprisingly, I did well on it even when playing on Hard difficulty. Of course I still have difficulty playing Battery on both GHM and Rock Band 2.

Then there is that "talked about" upcoming release Guitar Hero: Van Halen that everyone heard of but whish has not been made official, so while we wait for that and Guitar Hero 5, we are treated with Guitar Hero Smash Hits.

As any genius should be able to figure out, Smash Hits is a "best of" Guitar Hero consisting of the most well known songs of all the games prior to World Tour (GH1, GH2, Encore: Rocks the 80s, GH3: Legends of Rock, and GH: AeroSmith). There are 48 songs available, and even better, they are now all master tracks. Granted there is one rerecording (Cult of Personality from Living Colour, which was already a rerecord in GH3) and two live tracks (Unsung by Helmet and Cowboys from Hell by Pantera,) they sure sound a lot better than the covers that were played in the original game.

Even better, for the first time these songs can now be played by the full band. Of course the original guitar mode is available, but so is bass, drums and vocals.

Of course being the guitar expert at GiN I first played the game with the guitar, and much to my surprise, playing the guitar was much easier than before. With two songs in particular, Free Bird and (of course) Through the Fire and Flames, I was lucky enough to get 3 stars on Medium difficulty before, but the first time I played them on Hard using Smash Hits, not only was I able to finish the songs, but I actually got 5 stars on Free Bird!

At first I thought it was because over the two years since I played Free Bird, that I got better, but in the end I found that was not the reason. It was because the hammer-ons are significantly easier to play than they were before.

I found the same for the vocals. Yes, I will admit to my GamerGeeks co-host Kelly that despite her teasing me about doing the vocals to GHM underneath my breath, I did full lyrics for Smash Hits, specifically DragonForce.

And while my vocals are terrible on Rock Band, I actually got 5 stars on Smash Hits without a problem. Same applies with the bass (now that I’m used to the fretless strumming that started with World Tour,) but I still have to perfect my drumming skills. I will admit it’s because of my floor causing the bass pedal to slide around a bit. Now with one pedal sliding around is a pain, can you imagine me having two pedals sliding around due to the double pedal support. And yes, from what I’ve seen from the note charts, that double pedal is a must for Expert+ difficulty!

Now while I enjoyed playing Smash Hits a lot, and the song selection is way above average (as a "best of" compilation should be,) my biggest complaint has to be the value of the game. For only having 48 tracks (even if they are master tracks) and being able to play as the full band, paying $60 for this game ($50 on the Wii and $40 for the PlayStation 2) seems to be a bit of a ripoff.

Make the game $20 cheaper on both platforms and it might make a good purchase. But still, the game is quite fun, and for those who traded in their earlier games, this is the best chance for them to get the songs they enjoyed playing. Even better, you get them as master tracks.

CONS: But only 48 songs, and at full retail price. Game should have been released at a lower price.