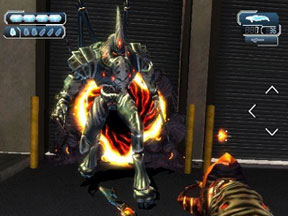 There have been those who say: Oh, the Wii is so cute. And honestly, its latest attempts at playing grown up with titles such as Dead Rising: Chop till You Drop have just been absolutely adorable. But of course, we all know that the Wii has no chance at being seen as a serious platform for more involved and complex narratives. Instead, we’ll let it have its petty attempts at contending with the big boys, sparing it little more than a passing glance as it yells "Hey, look what I can do!"

Bah! I yell at these people. Within the past couple of months-most notably through MadWorld and House of the Dead: Overkill the Wii has stepped up and shown us that though it may not have the hardware of its contemporaries’ platforms, it has enough power to deliver games that will keep us entertained and happy.

The latest proof that the Wii can hold its own is Sega’s The Conduit, a first-person, paranoia-driven, alien conspiracy shooter that may be lacking some storytelling pizzazz, but compensates with solid game play and amazing multiplayer capabilities.

In The Conduit, Washington D.C. has been shaken by recent attacks by strange beings. Having just saved the president’s life, our protagonist Michael Ford (a solid American name, if ever there was one) is chosen by a shadow agency called The Trust to uncover the mysterious perpetrators of these attacks. In doing so, Ford becomes entangled in a web of deceit that reaches to the very core of the American foundation!

Okay, so like I said, the story isn’t exactly original-more a Frankenstein of several different SF plots-but the gameplay is certainly nothing to discount for the Wii. Here you have your standard shooter, with a number of different firearms, grenades, and alien technologies to choose from, but also included with The Conduit is a little device called the All Seeing Eye, or ASE, which adds a bit more search and key functions to the experience.

The ASE is another bit of alien tech that our hero has managed to get his hands on. The gadget is a small orb that fits in the palm of Ford’s hand and basically uncovers hidden features throughout the game, provides The Conduit with a puzzle aspect, keeps you from being blown up by phantom mines, and unlocks doors and computer systems so progress can be made through the game.

Besides the basic level of gameplay, The Conduit also has a lot to offer in both the Easter Egg and unlockable gameplay senses. Hidden messages scrawled on the walls and strategically placed "Data Disks" add a bonus element to the game, along with a fairly extensive menu of unlockable cheats, concept art and extras.

Finally, the multiplayer elements to the game are a major win for the Wii. Even if you don’t have Wii Speak to chat with friends or adversaries, jumping on and playing a game with up to 12 players per match has never been more engaging. This thanks primarily to well-designed maps, several different player modes, and a highly modifiable control and visual setup.

As for the really bad, The Conduit gets a pass from me for the most of it. Because of technical limitations, the cut scenes for the game are extremely limited and cut into the potential of game’s story line.

Also, the voice acting for the game is also lacking in professionalism, coming across as dead and unimpassioned, but for the most part, I didn’t care enough to actually listen through the chatter.

Keep your focus on shooting the bad guys or the other multiplayers, and this title will be worth your time. Anything beyond that is hit or miss, though with a good deal of those shots being delivered to the "hit" category.