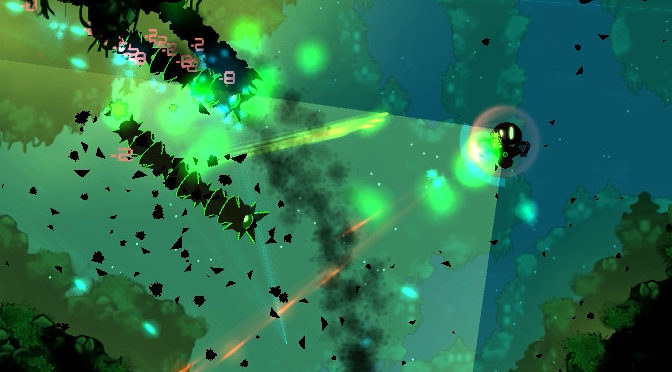 For my first PC game review I received a steam code for a little game called Good Robot by Pyrodactyl. This game was more than I expected. Good Robot was a delight to play and I had more fun with this game than some bigger, AAA titles. Good Robot is a very well designed game from the graphics to the music – and the lovable little robot the player controls. It also had a quirky little story to go with it.

The game itself is a shoot–em–up game where the player must traverse what looks like industrial caverns with robot factories. These factories produce the robot enemies your robot must destroy. Each level challenges the robot in a different way with more and more difficult robot enemies.

At least one enemy robot in each level when destroyed releases a glowing orb that contains a different weapon for your own robot. I did like that the developers gave the player’s robot a different weapon for both arms. Another interesting aspect of the game is each enemy gives the Good Robot money to purchase enhancements. These are one-time use accessories, either enhancing the robot’s abilities or protecting it from an enemy. My favorite is the fun hats that my robot could wear. It’s fun to watch my robot fly around with a top hat or cat ears, at least till the next wave of enemies.

This game was just fun to play and became addictive the more I got through the levels. It has an arcade feel when each new game starts from the beginning, or when you get to the last level and have to hit retry after being destroyed. I also liked how levels may have more than one exit to other levels. Each gate leads to a different challenge.

Levels did change up a little bit, which was nice, but because of its simplicity there was only minor changes in backgrounds from level to level. The game’s biggest wow factor was the quality of the game. The developers did an excellent job designing the levels, background and robots. There were also varieties of enemy robots that spawned as the game progressed. I also liked the music; it made me want to keep playing. The developers also added pieces of the story at upgrade stations. I found this to be amusing.

Overall this game has a lot of potential, its fun, and gets addictive after the first few levels. I would continue playing Good Robot as a great way to pass time, or as a reprieve from hardcore gaming.

One thought on “Great adventures with Good Robot”