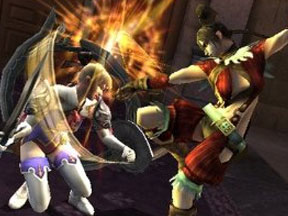 I am not the person to be reviewing fighting games. As far as the genre goes, I happen to be one of those button-mash players that can do little more than get by on luck and happenstance; however, that being said, I also have the tendency to view games objectively.

Empathy is a virtue, or so I am told, so I went into SoulCalibur: Broken Destiny to try and touch base with my inner fighter.

For those of you who listen to the GiN Lounge, you know that I think the first and foremost detail to consider for any game is story, and in this aspect, SoulCalibur has dropped the ball, which was a major strike against keeping me hooked.

But of course, story is not the reason these games are played.

And, I must admit, the fighting here is quite detailed for those who have the time and interest to sit and learn combos and timing cues. I am not of that breed, but not to worry, as SC:BD has a great deal to offer the amateur as well, mainly so opponents won’t cave in your skull round after round.

Yes, its seems the team at Namco has decided to make SoulCalibur accessible to the novice and the veteran alike, and for that, a suitable congratulations should be applied.

These hurrahs continue with the ability to keep the player entertained beyond the arena, as customizing options for a player’s appearance and fighting techniques have been expanded to provide gamers with options toward making their own fighter. Even the background for your menu selection card can be chosen from a fairly extensive list.

The game has also made the effort to get fighters beyond the AI, even when the game in question is found on a small handheld system. Wireless battles can be initiated along side ad hoc gaming options, so simply fighting the game’s AI isn’t a player’s only option. And to make sure your matches are more appropriately paired, the stats given during the fight selection menu give you a heads up of the competition you have to choose from.

As a final plus on the game, two new characters have been added for fighters to utilize in combat. The first is a new character to be associated with the SC world, Dampierre, a strange-looking fellow with a top hat and the most rocking mustache ever encountered in gaming. The second of these newly playable characters is a fan favorite no matter what side of the tracks you hail from: Kratos from God of War.

Since the developers of SC knew Kratos had more widespread appeal, the God of War’s fighting style seems to have been dumbed down considerably from some of the other characters so that even those fighters that aren’t really fighters (me) are able to take down a number of opponents just by trying to get by with the most basic control schemes, making it the smartest move that could have been made for this particular title.

Overall, SC:BD is a thoroughly thought through title that will certainly catch the attention of the hardcore fighting fan, but even with the appeal it brings to the table, the title will ultimately be a minor blip on the gamer looking for a little more content in the way of characterization and explorative gaming.