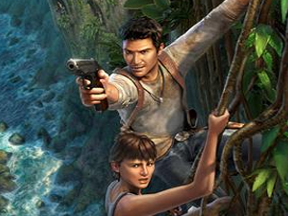 I have been looking forward to Uncharted 2 since I finished Uncharted. There aren’t too many exclusive titles anymore, especially for the PS3, but Drakes was worth the price of admission. Now Uncharted 2 gives gamers a reason to pick up a PS3 if they haven’t already. It’s that good.

As you can imagine my expectations where extremely high, and Uncharted 2: Among Thieves has met and exceeded all of my expectations. Not only are the gameplay and story line as good or better than the first game, but Naughty Dog stepped up and added a stellar multiplayer option, which really helps Uncharted 2 to hit it out of the park as the best PS3 game to date.

I will give you the brief version of the story here in a second, but I wanted to talk about how the game starts, which sets you up for all the action to come later. Are you ready for this? You (Nathan "Nate" Drake) wake up sitting in a train car, your stomach is bleeding and as you look around you realize that the car you are in is hanging off the side of a cliff. They don’t tell you how you got there, you just have to get out and get climbing. What a rush! I was instantly engaged in the story and have not looked back.

After you get to the top and get off the train, you fight a couple bad guys and then you flash back to the actual beginning of this tale. Eventually you get back to the train and find out actually how you got there. Once you get to the beginning of the tale, you find out that it has been about two years since your adventures in the first game and that you have been hired by some old friends and fellow thieves to go and find the lost treasure fleet of Marco Polo.

As the story progresses Nate (Voiced by Nolan North) is joined by Elena Fisher (Voiced by Emily Rose) and Victor "Sully" Sullivan (Voiced by Richard McDonagle) who you may remember as Nate’s friends from the first uncharted. This time around they are joined by Chloe Frazer (voiced by Claudia Black) who is a former lover of Nate’s. Both the major good guys and the bad guys are well developed characters with well thought out backgrounds that come to play throughout the story.

I think if I had not gotten stuck a few times where I was not sure of what to do or where to go, which resulted in my taking a break from the game so I could return with a fresh set of eyes, I could have easily found myself playing straight through the story. It was that good. Without giving anything away, there are lots of great twists and turns in the story. The characters keep the game interesting at all times, and keep that "Tales of the Golden Monkey" type of flavor throughout the title.

Uncharted 2, just like Uncharted, is a linear game, but unlike the original, Uncharted 2 doesn’t take place in one location, but involved quite a few diverse places as you hunt for the treasure. The balance of shooting and jumping are about the same. There is in my opinion less puzzle solving, but the puzzles that are in the game seem bigger and better to me. Also there seems to be more opportunity for stealth as a way to get around and to take down the enemy. All this leads me to think that the levels in Uncharted 2 where there is going to be stealth or combat are designed much better this time around, with elements that really add to the adventure. In fact, there is more than one way to accomplish tasks that allow for different play styles from sneaking in and taking out a couple of bad guys with a silent move, to getting into a good flanking position, or just shooting from the hip right at the beginning. The enemy AI also uses the terrain, so watch out; they are as smart as they were in the original, which was pretty good. On the plus side your companions also have a smart AI and are generally pretty helpful in a fight.

The jumping and especially the puzzle levels are incredibly stunning visually. I think this is even more so than in the first game. And of course the challenge is figuring out what to do next. Can I make that leap, or what am I not seeing? Several times I had to stop and walk very carefully along watching the camera angles carefully to notice the subtle pullback that revealed some key detail.

I should also point out that this is one of those rare games that are actually fun to watch. For a majority of the time that I played Uncharted 2 my wife sat on the couch behind me just watching and occasionally giving me some advice on something that I had missed. Normally we don’t do this as most games are boring to watch if you aren’t playing.

Jumping back to puzzles for a moment, I already mentioned that there are less of them, but that the ones that are in Uncharted 2 are bigger, better, and look amazing. Once again you have Drake’s journal to help you solve your puzzles, but this time around it’s not Sir Francis Drake’s journal but Nathan Drake’s journal. And this is subjective, but I think that when you use the journal this time around you spend more time flipping through looking at multiple pages to help you figure out what you are supposed to do.

So in conclusion, if you liked Uncharted, you’re going to love Uncharted 2: Among Thieves as it takes all the aspects that made the first game a smash hit and a 5 out of 5 GiN Gem winner and cranks it up a notch. If you didn’t play uncharted, well go and get it from the store, and while you are there, grab Uncharted 2 to save yourself a trip back to the store later. Oh but wait, I am forgetting something. MULTIPLAYER!!!

Sadly, we are not allowed to go above 5 Gems, otherwise I think we might have a contender for six as Naughty Dog takes Uncharted 2 (already earning 5 Gems) and added Multiplayer. And this is not just crappy multiplayer for multiplayer sake, but really good multiplayer that takes some of the best areas from the single player game and lets you tackle them again with friends. And if you are good, you can earn money which you can use at the store so you can reload faster or hold more ammo.

The multiplayer modes include team death match, elimination, capture the treasure (flag), and zone control as well as co-op and co-op survival. For the latter two, in my opinion, a headset is a must, something not every PS3 gamer has yet. And as I mentioned, the maps for these are pulled from the game — so there is lots of cover, climbing, and jumping for you and the bad guys to use. It is extremely easy to find games and players using the built-in system too. I tried at many different times of the day and night, and never had any trouble finding other people who have found this amazing title.

I think Uncharted 2: Among Thieves will likely win for best PS3 game of the year, and perhaps sweep the big prize for overall as well. It’s getting my vote in any case, and I’d highly recommend it to any gamer who likes action, puzzles, gunplay or just a darn amazing story voiced by excellent actors.