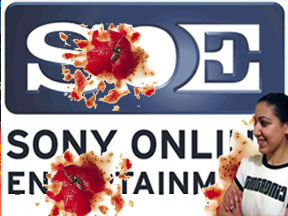 Over the last few days Sony Online Entertainment (SOE) has been stirring up a hornets nest. It has announced proposed updates to PoxNora, its collectible virtual trading card game. Needless to say there's been an outcry from players and once again SOE has been accused of "dumbing down" a game in order to attract new players. SOE's track record is not a pretty one when it comes to developer-player relations and it seems that it still has some lessons to learn to avoid eternal damnation in forum flaming contests.

PoxNora is no WoW beater when it comes to the world of MMOs, but it has an ardent following, as SOE found out when it decided to tamper with the status quo. Since buying the game in January this year, SOE has left players feeling as if gameplay is gradually being simplified to make it easier for newcomers, leaving a growing unease among veterans. This time SOE has pushed them too far, after announcing game changing updates, including the removal of customization, which many feel is the USP of Pox. As a result, the forums on the Pox website have been bristling with negative sentiment.

This sorry story may sound familiar to the MMOGers among us. Remember Star Wars Galaxies (SWG) and New Game Experience-gate? Back in 2005, SOE quietly released the NGE update, which has become infamous in the MMO world. Players were only told about the contents of the update at the eleventh hour, but the complete change to combat and classes, compounded by over-simplification of the game led to in-game protests and dedicated forum hate directed at SOE. In fact, some MMOGers are finding it hard to forgive and forget, which could make SOE the most hated MMO developer ever.

Despite unprecedented negative player feedback regarding NGE, SOE pushed the changes through and players left in their droves. Fans marveled at SOE's seeming determination to drive good game into the ground and I'm sure many MMO developers learnt what not to do to a healthy community. Surely, if you have to keep an update secret from players, it means you know it's a bad decision in the making. Or maybe that's just me.

It seems that SOE has learnt a few lessons since the days of SWG. This time around it did announce potential changes and it has reinstated some level of customization as a result of player feedback. SOE has listened, which has got to be a first. Despite this change of tactics, SOE still excels at enraging gamers like no other developer. I've compiled three key lessons to help developers ensure they have a happy MMO community.

Have the courtesy to communicate with players before implementing major, potential game-breaking changes, after all, they're the ones playing the thing and keeping the revenue ticking over. If you don't, you risk alienating your community and killing the game. Please see Star Wars Galaxies as an example.

Sometimes forum rants are just gamers letting off steam. But sometimes, usually when all forum threads are dominated by negative feedback, players are genuinely angry and justified in their rage. Learn to distinguish between these two to avoid alienating your community and killing the game. Please see Star Wars Galaxies as an example.

As the developer, you have an overview of the game and where it's going. Whilst this means that some changes may not make sense to gamers because they don't know the overall strategy, this does not offer you an excuse to ignore gamer opinion. Sometimes the gamers are right and you are wrong. Ignore this lesson at your own risk, if you do you may alienate your community and kill the game. Please see Star Wars Galaxies as an example.

When it comes to SOE and its online communities, history looks set to repeat itself again and again, and again and"well, you get the picture.