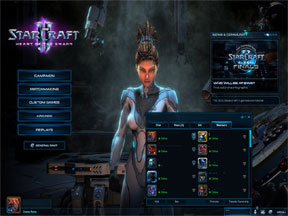 Starcraft II: Heart of the Swarm

Back in the year 2010, Starcraft II: Wings of Liberty easily won me over. As someone who wanted a true sequel to Starcraft, (and waiting ever so patiently while Blizzard centered their focus on World of Warcraft) I wanted a return to classic real time strategy, while at the same time being able to play it on my slightly aging laptop. Thankfully, not only did Starcraft II run great on my MacBook, it was an amazing game in its own right, a true return to glory, and yes, was my pick for Game of the Year.

But even with all the praise, there were some issues that came up. Aside from the DRM issues that were added to the software, was the fact that the main game consisted of only the Terran campaign, while the Zerg and Protoss campaigns would come in the form of expansion packs.

The Zerg expansion, Heart of the Swarm, is now out. While I wish it didn’t take over two years to release, the final result was worth it.

The story of Heart of the Swarm takes place after Wings of Liberty ends. A now human Sarah Kerrigan is being held in a research facility, as a test subject to see if she still is able to control the Zerg. After a Dominion attack on the facility, Kerrigan and Jim Raynor escape the facility and order Raynor’s ship, the Hyperion, to escape. But when searching for Raynor, Kerrigan intercepts a news broadcast stating that Raynor was captured an executed.

Seething with revenge against the Dominion and the man who left her to die, Emperor Arcturus Mengsk, Kerrigan sets off for Zerg space in an attempt to reunite all the Zerg forces to help her out. Over the game’s missions, Kerrigan builds up her army, as well as undergoing a process to return her to glory as the Queen of Blades.

In doing so, Heart of the Swarm’s unit development takes more of a role playing system. As Kerrigan completes missions and special objectives, she earns levels that will unlock new ability tiers. With each tier there are two (and eventually three) choices for Kerrigan to select. How you build out your army determines which strategies are going to be most effective for you in combat.

In addition, new units can be upgraded, and then evolved via special missions, to mutate into more powerful units with more special abilities. This results in some specialized forces that should appeal to most types of strategies and player preferences.

Once again, Blizzard maintains their top of the line polish in Heart of the Swarm. Everything that I enjoyed about Wings of Liberty is back. While I still am a faithful Terran player, I had no problem getting into the tactics of the Zerg. After performing a few Zerg rushes myself, I now see why it’s a popular tactic in the game. There is tons of replay material available in the game as well once the initial campaign is done.

But what I really appreciate the most is how well the game runs on my 2009 MacBook. After the experience I had with Diablo III (not including the always online DRM and the Error 37 debacle, but also the game slowing to a crawl even at lowest settings) I am more than happy to see that Heart of the Swarm runs just as fast as its predecessor. It’s a true DLC, with the same requirements as its predecessor game.

Even at the lowest settings, Heart of the Swarm is still a looker, and it sounds great too. Tricia Helfer from Battlestar Galactica returns as Sarah Kerrigan, only sealing her true position as a sci-fi diva, and of course Robert Clotworthy is amazing as Jim Raynor. I do however miss some of the humorous elements that Wings of Liberty had, such as the Ron Burgondy-esque propaganda spewing reporter, the iPod spoofing iPistol ads, and the Lost Viking mini-game. But since the Zerg are a much darker race it all makes sense.

At $40, Heart of the Swarm might be a bit expensive for an expansion pack, but at least you get a solid campaign as long as Liberty’s was in the core game. The Starcraft II story is getting much better, and I can’t wait to see how it will all finish with Legacy of the Void. Just please, Blizzard, don’t wait until 2016 to release it.

PROS: Excellent continuation of the Starcraft II storyline. Roleplaying elements for Kerrigan’s development. Runs very well on earlier hardware, providing it can run Wings of Liberty. Quite extensive for an expansion pack.

CONS: At $40, might be a bit pricey for an expansion pack. Still a very long development cycle, but we’re used to that from Blizzard. I miss some of the humor that Wings of Liberty had.