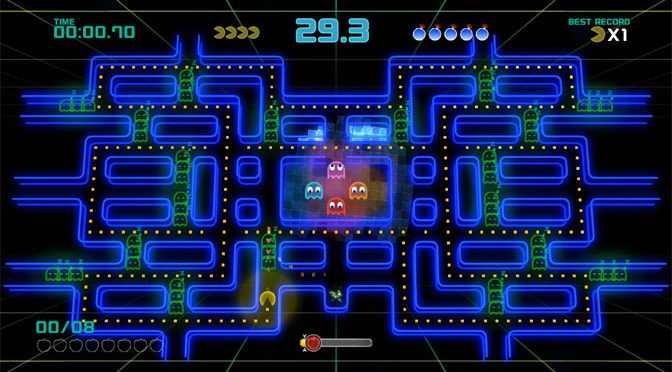 Hey all I’m back with a new take on a classic! It’s Pac-Man Championship Edition 2!

Gameplay: Pac-man has no plot so forgive me for skipping my customary synopsis. Now as for the gameplay, It’s pretty much the same Pac-Man you might, if you are my age or older, have played growing up. That isn’t to say there aren’t changes, because there are and they are pretty mind blowing for anyone who’s ever played Pac-Man before.

Those changes include, being able to touch the ghosts without losing immediately, and if you give them a bit of space and run away and then hit them again it’s still not an instant loss. This is probably the single biggest and most “controversial” change of them all. Touching those ghosts has always before been an instant loss, and this change isn’t necessarily for the better. In fact, for those Pac-Man loving fans out there, you will probably hate this change. It makes the game way too easy; although there is a timer for each stage this isn’t much of an issue.

[amazon asin=B01L9R74YW&text=Come catch Pac-Man fever all over again with a copy from Amazon!]

The second big change is the ability to “Bomb Jump” back to the beginning, and enter a “Safe Zone” where the ghosts can’t enter. You only get three of them per stage, but those three will last most players for each stage.

The third big change is the addition of “sleeping” ghosts that after passing by will line up behind one of the regular ghosts and follow it around in a snake line. They also can cause a loss but the same rules apply to them as the regular ghosts. The real issue with this change is the fact that when you eat the Power Pellet and go to eat them by eating the ghost leader they’re following is when it switches to a really awkward viewpoint where you can see the 3D models being eaten while the clock is paused.

This change was probably the most annoying of them all as it breaks up the craziness of the gameplay and that’s always been the appeal of Pac-Man; the crazy feeling of running away from the ghosts in order to get that last pellet.

The fourth big change, but it’s really just a change of background in my opinion, is the addition of “Boss Battles”. It’s essentially just a series of stages back to back with a big fat ghost wavering in the background. This isn’t nearly as controversial as the previous three changes, but still it’s one more change that fans may not enjoy.

There are a few more changes including a fruit that you must eat to clear the stage that moves around like a ghost does, meaning they won’t ever do a 180 and run the other way suddenly. These changes aren’t such a big deal, and personally I found them to be great additions. But the first three are pretty much changing the game’s tried and true formula completely.

Art: Here’s the good part sort of. The game uses 3D models on a 2D Plane, although going in between stages will utilize the Z axis. However for the most part it’s an updated and prettier version of the original Pac-Man. I really do think they did quite well with the art, although frankly I’ve never been a huge fan of the art of the series in general.

Music: Classic Pac-Man, complete with the annoying “Waka Waka” sound effect of him closing his mouth as you move him around the various stages. I found it grating after about a minute, but I do realize that it’s a throwback to the classic game and those people who will buy this game will probably be ardent fans of said game.

Overall: If you don’t mind the considerable lessening of difficulty of the Pac-Man formula, you’ll love Championship Edition 2 if you loved the original Pac-Man. For everyone else, you could probably watch a YouTube video of a stage and call it good.

For those who like: Classic Pac-Man, Easy Games, Classic Music and Art.

Not for those who don’t like: Any of the above, in particular the easing of the tried and true Pac-Man formula difficulty.