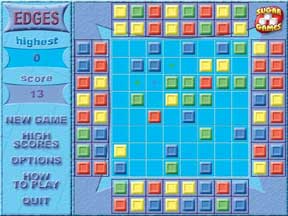 Sugar Games is different. They are a relative newcomer in to the game industry, and their goal right now is to let those of you in the casual game segment have a good time without draining your pocketbook.

To that end, they have created Edges, a puzzle game that is a bit like Tetris, which is not too surprising considering that Sugar Games is from Russia, where Tetris was born. Edges, like Othello or even Chess, is a game where the rules are easy to learn, yet mastering the game takes much, much longer.

Since this is aimed at the casual game market, the controls are very simple, and the price is low as well. In fact, you can download a free sample copy of the game and try it out if you like at http://www.sugargames.com/edges/?ref=gameindustry

What you have is a large square play area. Around each edge of the square are several colored blocks. On your turn, you can slide any of the blocks from the edge of the board into the play area. When you get three or more of the same color blocks lined up, you score points and those blocks get out of your way to make room for others.

You are able to see two rows deep into the square, so you can always tell what color comes up next once you make a move. This can be helpful if you need to get two of the same blocks to sit together on subsequent turns.

But there are some forces working against you as well. Every time you make a move, randomly several blocks will be dropped into your playing field. These random moves might prove helpful, but more likely will serve to block your progress. The best way to handle them is to bring out similar colored blocks, build a line, and let them dissolve.

Because the game is turn based, you won’t feel rushed like you would in Tetris. Nothing will move until you make your move. You can study the board for hours if you like, or try to keep play up at a fast pace. On the easy mode, each of the random blocks are telegraphed with little colored stars, so you know where the evil blocking squares will land after your move. On the harder modes, you won’t know where they are about to appear.

It is great to see a game in the casual market actually have skill levels like this. It makes the experience much more fun to play, and you won’t get frustrated while you are still learning. The game is suitable for younger kids on the Easy mode, and would make a fun little activity in critical thinking, pattern recognition and cause and effect logic. Playing with an adult would make a nice computer-based experience.

The soundtrack is really well done. There is some nice background music that plays while you study the board. It’s almost relaxing. And when you make a correct move there are some fun sound effects that reward you in addition to your score. I found myself feeling a little bit of happiness each time those reward tones played and my score shot up.

The game keeps track of your scores too, so you can see what the high scores are at each level. Again, this opens up the game to family play, as each person can compete together or on their own time to try and get the highest score at each level. I know it would be frustrating if you were the champion at the Easy level, yet your brother or sister ends up beating you at the harder ones.

Because the game is different each time you play, the replay value is very high. You will never see the same game twice, so you are learning the rules of the game and not simply memorizing a set pattern.

Graphically, the game is quite colorful and appropriate for a game of this type. There are enough visual rewards for doing the right thing to compliment the sound.

This is one of Sugar Game’s first titles for the casual market, and I am looking forward to whatever they come up with next.