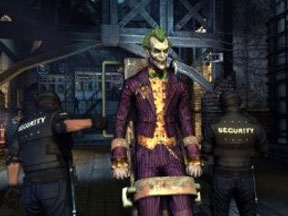 I’ve witnessed tons of Batman games over the course of my gaming career. While there are some that are excellent (the NES Batman and the SNES Batman Returns brawler) come to mind,) there are also those that are just plain awful (Batman Forever on consoles and the arcade.) It almost seems identical to the movie releases. After all we had the good (the Tim Burton and Christopher Nolan movies) and the wretched (Joel Schumacher.)

Then there was the animated series which came out after the Burton movies were released. Not only did it keep the same dark environments the movie had, but also was one of the first syndicated cartoons that featured more mature storylines. It was a cartoon designed for adults as much as it was for kids. Even the movie spin off Mask of the Phantasm was good enough to rival some of the works by Burton and Nolan.

But in my opinion, what really made the animated series so good was the voice acting. Kevin Conroy’s Batman might be the most believable of all those who played the Dark Knight (and not having to use that gravel voice that Christian Bale used.) But who really stole the show was Mark Hamill as The Joker. I always thought he was a good voice actor, finally able to escape the typecasting that came from Star Wars, but it was as Joker that he was able to create his own niche to the character, even going as far as being rated up there with Jack Nicholson and the late Heath Ledger.

But even the Joker had to have his own foil, and it was the hilarious addition of Harley Quinn. Voiced by Arleen Sorkin, Harley was able to add a whole new level of complexity to the Joker’s hilarity, even going as far as getting on his nerves. Nonetheless, her admiration, almost to the point of obsession, towards "Puddin’" or "Mr. J" made her such a popular character that she eventually became part of the DC Universe canon.

Why am I going so deep into the cartoon? Because Batman: Arkham Asylum draws so much from the animated series, it almost feels like a whole new episode. In this episode, Batman has arrested Joker (again,) and is sending him to Arkham Asylum (again.) But there is a catch. Batman feels this capture was way too easy. He was right because shortly afterwards, Joker takes over and releases all the inmates.

A group attacks Batman, and shortly after, Joker harasses Batman by telling him that he has control of the Asylum, abducted Commissioner Gordon, and that’s when the fun begins. While most of the action will center on fighting all of the Asylums goons, many of Batman’s well-known enemies also join in, including Victor Zsasz, Killer Croc, Bane, Scarecrow, Poison Ivy, and of course, Harley Quinn.

Also taking part in the action, although off camera, is the Riddler. Continuing his traditional M.O., riddles are scattered all over Arkham, whether it is in hidden trophies or mysterious items that can only be found by strange clues. In addition to all the clues that the Riddler provides, extra bonuses such as interview tapes with the more well known criminals or archives recorded by Amadeus Arkham can be located.

Combat in the game is very simple. The X button does basic attacks, Y counters, and B executes stun moves on the 360. While many people would consider it a mindless case of button mashing, it is far from it. Timing and precision will result in higher combo attacks, and when a critical hit is executed, it is slowed down 300-style.

Talk about an excellent way to show the damage that Batman dishes out. Even better, while the combat might seem simplistic, it never gets to the level of repetition.

Even better is the stealth mechanics. As everyone knows, Batman’s specialty is to strike fear into criminals, and by attacking in the shadows, he has tons of special moves to strike that fear. Thankfully Amadeus Arkham has a strange fascination with gargoyle statues which Batman can use as a vantage point. From there he can strike with a quick glide kick followed by a quick disability move. Or he can do the coolest move in the game, the inverted takedown. Hanging upside down, Batman grabs a thug and just leaves him hanging from a gargoyle.

Stealth mode is enhanced by an amazing vision display called "Detective Mode." What looks to be a heads up display at first can provide tons of useful information, such as finding out weak walls or hidden passages. It even goes as far as showing if anyone is armed, and even his composure. Nothing is more thrilling that seeing one armed guard left over and his composure is terrified. Proof that Batman does what he does best, frighten criminals to madness.

Of course stealth attacks can’t be that easy when guards are armed, and that’s where his "wonderful toys" come into play. In addition to his trademark Batarang (also available in multiple, sonic, and remote control flavors,) he also has explosive gel (perfect for booby trapping thin walls and floors) a Batclaw (capable of pulling items and even thugs,) a line shooter (for crossing over long gaps and kicking out goons,) and a frequency disruptor to disable any security doors and traps.

Being on an island, Arkham Asylum is a huge place. Not only do we have the intensive security wing, we also have a botanical garden, Amadeus’ Arkham’s mansion, and a hospital. Even Batman set up a second Batcave deep inside the island’s caves. Whoever thought it would end up being used for an event like this?

The story might center on Joker’s taking over of Arkham, but there is a lot more to it. There are many surprises to come up, such as the constant harassment by both Joker and Harley Quinn over the video screens and intercoms, flashbacks to nightmares past, and even a "fourth wall" moment that hit a little too close to home. Needless to say, that Arkham Asylum truly makes you feel like one of the inmates, because it will mess with your head.

One thing though that Arkham Asylum will not mess with is your senses. Running on the Unreal Engine 3, the game is beyond gorgeous. All the characters are well detailed. Batman’s costume actually gets progressively damaged as the game goes on, and each of the environments are full of activity, both normal and insane. No slowdown is present in the game (except for the intentional type during combat) and it might be in my opinion one of the best looking games to come out on the 360.

The same can be said for the sound. Considering it featured a majority of the animated series cast, the voice acting is triple-A quality. Special credit has to go to Mark Hamill. As if his Joker performance during the animated series wasn’t great enough, this version is even more exaggerated. When he gets on the loudspeakers or video displays, I had to pause to hear what he would say. Some of it is just hilarious. Same goes for Arleen Sorkin as Harley Quinn, although there are times I would just love to shut her up. Eventually Batman gets his against her, but I won’t give away any spoilers.

One thing that needs to be mentioned about the acting, it results in some of the best "Game Over" comments this side of Metal Gear Solid. Joker, Harley (or one of the other super criminals you fight) actually get up close and personal and insult you on your failure. Hilarious!

Ten hours is a typical time frame for completion. Of course, solving all the Riddler’s puzzles and unlocking all the extras will take much, much longer. There are also challenges available, both in combat and stealth. They are a nice diversion from the main story, and PS3 owners are even able to fight as the Joker. Hopefully in the near future the 360 will get him (or even Harley) as DLC.

Batman Arkham Asylum far exceeded my expectations. Not only is it a well designed game with amazing voice acting, it even gave me a good scare that affected my reality. We might already have our Game of the Year winner, but we’ll see how the year turns out.