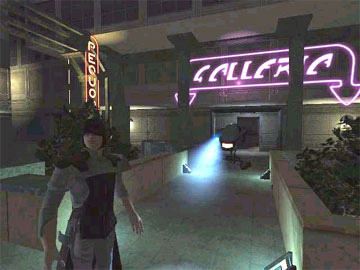 Choices, choices, choices; that’s what Deus Ex: Invisible War is all about. If you want to be spoon-fed then I suggest you look elsewhere. But if you want a sense of limitless possibilities, then step right this way.

Deus Ex: Invisible War is of course the follow-up to one of the PC’s much loved games. For its second outing console gamers are given the chance to get their clammy paws on the Deus Ex universe.

At this point, I must hold my hands up and admit that I haven’t played the original. Following charges of being "dumbed down" for console gamers, I shall see if making the game more accessible has marred its performance from a first-timer’s perspective.

Everything kicks off with an intriguing cut-scene featuring explosions and chaos – just how I like my games to start. After a terrorist attack on Chicago, your hometown, everything is destroyed and your world is thrown into turmoil. The first choice you make is your character. Whether you choose the female or male character does affect later missions available to you, as opposed to physical abilities.

Regardless of gender, you play as Alex D, a graduate of Tarsus Academy. Alex has been selected for a scholarship on the security operations residency programme, but all hell breaks lose when an organisation of religious fanatics called The Order, attacks Chicago. Needless to say, Alex becomes embroiled in a world of conspiracies and covert operations after being transported to safety in Seattle.

Caught between rival factions Tarsus and the Order, your mission is to make sense of what’s happened and gain information to help you decide who to trust in this crazy, mixed up world. Throughout the game you are given missions by various shady people from night club managers to cult leaders and gang bosses. All you have to do is choose which side you are on. Alternatively, you can play them against each other, do missions for everyone and double-cross them at every turn. Hmm…tricky one.

Fortunately, Alex has biomod implants to help you complete your missions. These nanotechnology implants provide you with special abilities and can be upgraded throughout the game. How you choose to equip Alex directly affects how you can approach different missions.

Essentially, biomods enable you to customise Alex and tailor your gaming experience. For instance, upgrade strength, speed and install electrostatic discharge to enhance hand to hand combat. Alternatively, opt for hacking abilities and the cloak device to create a more stealthy character designed to sneak past foes. I found hacking particularly useful for getting codes and disabling security systems. Tap, tap, tap and the system was down, leaving me free to ransack, raid and er…sometimes steal.

Of course there are weapons to collect along the way and they are many and varied. One of my particular favourites was a Star Wars style energy blade – kind of samurai in space thing going on there. EMP grenades are an essential part of the Deus Ex adventure because they disable those pesky robots that seem to blight your every move. And let ye be warned; save those multi-tools, you never know when you have to blow a lock or access a trunk full of goodies. Your inventory does get full so there is a limit to the weapons you can carry, adding a small element of strategy. Do you dump the sniper rifle or the rocket-launcher…ooh, tricky.

The graphics are average for Xbox and suffer a little from a drop in frame rate on busy screens. The upside is this doesn’t cause any issues in terms of playing the game and the excellent shadow effects more than compensate. The environments are reminiscent of Star Wars and Fifth Element; building interiors are a bit bland due to a lack of detailing.

The story is the driving force and makes you plough through the missions to uncover the web of intrigue. Faultless voice-acting brings the story to life, which becomes more and more crucial as the game goes on. Your character is upgraded to the max pretty early on in the game, which puts a heavy dependence on the story. Fortunately, the story is good, but it would be nice to have some other incentives too.

Deus Ex does create the illusion of open-ended gaming, but it is only an illusion. On first playing it seems that there are a myriad of paths through the game, almost to the point of being overwhelming. On repeated play it becomes clear that the story is leading you where it wants you to go, not the other way round. The main differences come down to dialogue, as opposed to getting different missions.

All in all, its faults are mere niggles and Deus Ex offers some very satisfying gaming. I can’t say that there were any stand out moments for me, but it did offer good, solid, quality gameplay and story all the way through. What more could we ask for really?

Editor’s Note: Chella asked me to add a paragraph or two to this review since I played the original game and also the PC version. I don’t think this game was "dummied down" compared to the first. There were a few less non-linear missions I guess, but the gameplay was solid nonetheless. I will say that the graphics on the PC were amazing, probably a full five GiN Gems. However, on the Xbox, they are merely average. I guess a lot of detail had to come out to make it run smoothly on the console. It took a fairly high-end PC to handle the game.

The biggest disappointment in my opinion came from the four possible endings. Come on Eidos, what about ONE happy ending? None of the endings (there is a point near the end of the game where you can save and make a few different choices to get to different endings) are really good. I guess they are different shades bad. The obvious ending that the game is steering you towards is one of the worst actually. And the absolute worst ending seems to be the one that is custom made for a sequel. Guess we will see about that.

DeusEx was an enjoyable follow-up to one of the best games of all time. It does not break any new ground, and the endings (and seeing your old character become a psycho NPC in this game) might break your heart. But you will want to play and enjoy this game nonetheless. Combat, strategy and role-playing are all put to good use in a fine mix with Invisible War.