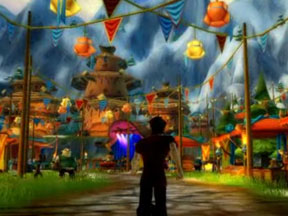 Somewhere between Runescape and World of Warcraft lies Free Realms, a children’s MMORPG. Filled with quests, mini-games and combat, the game is easy to play and offers a wide variety of things to keep a player interested, no matter what age.

Starting out, you can either create your own character or choose a pre-made one. The interface to create a character is quite easy, allowing you to choose from human or “pixie” males or females, and changing hair color, basic expressions, basic clothes and so on.

Once you’re in the game, the tutorial walks you through the basics of how to do everything and where you should be looking. You can either use the mouse, keyboard mapping or a combination of both (which I personally found to be the easiest).

There are various “trade skills” to master, but all are fairly simple, so if you’re planning on devoting a lot of time to one particular skill, you’ll probably be bored quickly. However, while the game doesn’t go into a lot of depth with anything (there’s only so many “match-three” games I can handle) there’s such a variety of things to do that you can spend quite a lot of time mastering everything. There are dozens of quests to help you level up your skills, which award something called “Stardust,” which is like most other games experience. However, the skills are often quite involved when it comes to actually producing something, with many steps to reach the final product. While this is fun at first, it gets to be a bit repetitive after a while.

In addition to skill-specific quests, there’s numerous quests out there that have absolutely nothing to do with skills, and those typically award items or coins, which can be used to buy items. If you’re one of those people who likes to carry around a full wardrobe in a game, this one is quite good for that. One of the best aspects is seeing what your character will look like in their fancy new duds.

Some of the quests the NPC’s hand out involve killing specific monsters, which brings up combat. It’s very easy in this game, and it’s all instanced. So if you enjoy so-called “bluewalling” or jumping the unsuspecting player, look for another game. In my opinion, this is rather limiting, however, keep in mind this is a game for children, and it does cut down on the crying in chat.

The mini-games can be quite entertaining, expecially the card game, which for those of you who have ever played a trading card game like Magic, should feel quite familiar. If you’ve never played one, you should check out the version in Free Realms. When you get sick of grinding out levels to advance to the next part of a quest, having the mini-games available is a nice way to take a break, while still staying interested in the game.

The graphics are a rather cartoony 3-D style that I found rather appealing, and were well-rendered. If you’re looking for ultra-realistic blood and gore, look elsewhere; this is a kids game through and through, but it’s definitely enjoyable for adults who have some time to kill.

Chat in game is enforced and has some stiff filters on it, so if you’re looking for a game to keep the younglings entertained and something that you could stand playing, this would be it. The game requires Flash and a small download, so if you had a lenient boss, you could even play it at work. Unless of course, you use a Mac at work, in which case, you’re out of luck.

If you limit your play time to an hour or two a day, it will take a while for you to get bored, and overall I would say this is a nice way to relax with your kids who just have to play on the computer.