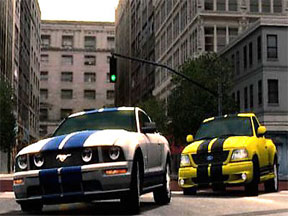 Talk about Bold. Ford’s latest commercials all talk about bold movies happening everyday and feature things like a Ford truck pulling a wrecked 18-wheeler out of a tunnel so that an ambulance can get through.

But while that would be bold, perhaps an even bolder move is to release a racing game that only features one brand of car, in this case Ford. We have seen other companies do similar things, like little Flash games you can play for free. But actually asking someone to pay $20 for a game that only features one type of car seems a bit much. Especially when you consider how tight the racing genre is, this certainly is a bold move.

Let me get one thing out of the way upfront. I’ve never really liked Ford because my first car was a 1984 Ford Escort and I could not keep it running. There were times where I would be driving and the engine would just stop. I would then have to pull over and crank the engine again.

To make matters worse, that car died on a hot summer day while on the Washington Beltway during rush hour, a fate I would not wish on my worst enemy. It was found the problem was a blown head gasket that would have cost me two grand to repair. What was the use of spending that much money on a car whose blue book value was only $500.

Since then I have sworn off driving Fords. I don’t even back up NASCAR drivers who race Fords, and to Mark Martin, who recently decided he is going to jump to a Chevy team (MB2 Motorsports) next year.

Then again, Ford has only one good thing about them: their cars can get SIRIUS as an option.

My dislike for Ford continued while playing the Gran Turismo series, where the only cars I drove were Nissan Skylines and Subaru Imprezas, until obtaining the top of the line GT-One. Still, Ford models like the GT40 were left ignored.

Ok, I say all that in the name of total disclosure. Now you know where I stand on Ford and why. But still, despite all my dislike of driving Fords, I gave Eidos’ latest racer, Ford Bold Moves Street Racing a try. What I found in the end was a very basic street racer in a Ford cover.

Ford Bold Moves Street Racing features many of the more popular Ford lineup of cars: Escorts, Mustangs, Cobras, GTs and the Shelby GT500. The game has single racing modes such as a single race and a championship mode.

Completing each of these modes allows extra cars and additional tracks to be unlocked. However, Ford Bold Moves also features a new Team Racing mode. In addition to the standard Single Race and Team Championship modes, there are also driving challenges and a tutorial mode that explains the concepts of Team Racing.

Team Racing is a unique concept in that it allows you to control a team of three teammates and switch between cars on the fly. In addition, orders such as blocking and drafting can be given.

Sadly, the unique idea of Team Racing doesn’t hide the subpar AI and vanilla style racing gameplay that we have seen many times before. And when racing, cars feel a bit too loose and have a tendency to slip towards the wall.

Visually the game looks good, though it is obviously a second generation PlayStation 2 title. Environments are simple and lifeless, yet the cars look decent. However, Project Gotham 3 this is not! Anyone expecting licensed music or any impressive soundtracks will also be disappointed; the menus have very basic, boring music while the races consist of only the sounds of cars. At least the cars sound realistic.

Multiplayer consists of two player races on the PlayStation 2. There is no network option.

A lot of people complain that racing titles are boring, and Ford Bold Moves Street Racing will not change their opinion. If the AI was challenging, or there was a decent networking option, then maybe there might be some ray of hope, but as it is now, the game is standard dull racing fare that maybe a few Ford fans might like, but I’m not one of them.