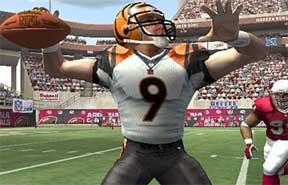 This year in my football roundup, gameplay and entertainment value will be weighed more than graphics and audio. It is very important that we keep this in mind, as it is different than traditional GiN scoring, which is a combination of all the other values weighted equally.

While I am looking forward to this year’s football season, I am dreading how the 49ers are going to turn out. Not only did they lose two of last year’s key players, Jeff Gar-thee-a (who is now in Cleveland), and Terrell Owens (now in Philadelphia), but they do not have a qualified quarterback. While Tim Rattay did perform well last year when Gar-thee-a floundered, but an injury earlier in the year is now causing doubts, and the less I can say about Ken Dorsey the better, considering the fact he came from the whining University of Cryami. I guess that I will be keeping an eye out for the 2005 Draft when the 49ers will have the first overall pick. (Hopefully it won’t be another Chargers-Eli Manning controversy.)

As for the console market, the football competition is tougher than ever. With Microsoft not releasing NFL Fever this year (and in fact, putting an end to their entire sports lineup), it now comes down to a head to head between ESPN 2K5 and Madden 2005. For the last three years, EA has been the winner.

This year, Sega and ESPN are desperate. Not only did they release ESPN NFL 2K5 three weeks before Madden (it’s usually the other way around), but they have released it at the low price of $19.99. While this might appeal to some NFL fans, one feature will turn them away. The Crib feature used last year returns, but now there is a phone option to play against "celebrities" like David Arquette, Carmen Electra, and Steve-O from Jackass. Their teams consist of the best players of the NFL (almost like the Yankees of football, if a salary cap did not exist), and the only interaction you get from them is a talking head heckling you after a big play. I’m sorry but if I want to play against somebody, I would rather play against a professional NFL player, and not someone who tattoos "Your Name" on his butt.

While that might turn many gamers away, the enhanced use of the ESPN license is greatly appreciated, as not only do we have a visual likeness of Chris Berman to accompany last year’s voiceover, but we also have the addition of Trey Wingo and Suzy Kolber to the lineup. Wingo is only a voiceover, but Kolber joins Berman in likeness. They look accurate but the lip synching is horrible. They should get a cue from id after what they did with DOOM3.

The best addition to ESPN however, has to be the VIP system. What used to be just a simple profile in other games has expanded with complete detail of how you play. In addition, other players’ VIPs can be downloaded and used to play against, so you can practice against other players before facing them online.

As for Madden, EA is capitalizing on its 15th anniversary by releasing a limited, one-run only Collector’s Edition for PlayStation 2. The Collector’s Edition features two playable classic Madden titles based on the Genesis and PlayStation1 versions, a Madden trivia game, the ability to play classic scenarios such as the "Immaculate Reception" and "The Catch," and bonus video segments on the whole Madden phenomenon and how the game is developed.

As for the standard edition, EA added to their Playmaker control by making it available for defensive gameplay as well. This year’s Madden is centering on defense and the new Playmaker, in addition to the Hit Stick, show this point. A simple flick of the right thumbstick runs the risk of either scoring a big hit or missing the play altogether. Skillful use of the Hit Stick could make the result a win or a loss.

The Franchise mode is renovated as well. While keeping the wonderful Owner Mode, an addition called Storyline Central builds on NCAA’s Sports Illustrated idea, using copies of USA Today for national coverage and local newspapers (such as the San Francisco Chronicle and Pittsburgh Post-Gazette, but surprisingly no Washington Post or Times) to cover their respective teams. In addition, Fox Sports Radio analyst Tony Bruno provides a weekly radio show where he speaks with real NFL players and coaches and provides insight on the previous week and upcoming games. I don’t know how much was recorded for this, but rarely did I hear a line repeat.

The last addition of Franchise mode is player morale. If a player is doing well he will be very happy with his team and want to extend his contract, but if he plays horribly and ends up being benched, he will vent out his anger to the media and demand a trade. Even Tony Bruno will mention it on his radio show. If he says someone is placed on the trading block, you will actually see him there.

Once again, ESPN gets the job done, but on the Xbox it’s taken a step further. This year’s game was designed with the Xbox in mind and all the visual improvements take advantage of it. The use of the ESPN name is improved this year with the presentation, namely the accurate likeness of Chris Berman and Suzy Kolber (with the exception of the previously mentioned bad lip synching).

Madden has improved greatly this year, but there is still a lot of work left to be done. The biggest improvement in the graphics is the player quality. The jerseys are now so detailed that you can actually see the padding underneath. I still have to complain about the lettering on the back of the jerseys as they are still not accurate, and for this year’s new Cincinnati Bengals jersey isn’t completely accurate. The numbering on the back is based on the Denver Broncos, which I can’t understand, since the numbering for the Chicago Bears would be more like the real deal.

Again, ESPN wins in the audio department. Chris Berman, Trey Wingo, and Suzy Kolber all provide ESPN-caliber presentations, while the tried and true fiction play by play team is as good as ever. This year, however, the audio is more customizable than ever. On the Xbox version, custom soundtracks can now be edited to use as actual stadium music. Now if only they can make each track stadium-specific, and I will be all set.

In addition, ESPN NFL 2K5 is the first ESPN game to feature their new ESPN GameSound 5.1 technology, which has been created in a joint venture between ESPN and Dolby. It has also been used so far for NHL 2K5, with other ESPN titles to come.

Madden too has improved, but not as much. The only real improvement this year is the addition of the Tony Bruno show. Other than that it’s the same dull commentary that we have been used to these last few years.

As everyone knows, when it comes to sports games online, I want something that feels and plays like the real thing, and that is something that ESPN seems to have a lot of trouble figuring out. They may have improved on the defensive side using the new Maximum Tackle feature where you can choose between making a wrap tackle or go for the big hit, and this time you can actually tackle players without them breaking away (despite being pulled down by 4 defensemen), the offense is still a nightmare.

Most of the time on the running game, I’m barely lucky to get even one yard (especially on 3rd and inches situations), and once again YOU CAN’T CATCH THE BALL! Look ESPN, I know that incomplete passes are common in football, but you must realize that not everyone has hands of stone. I’m sick and tired of having a receiver wide open, I throw to him, he catches it, takes one step, and then drops it. Either that, or I’ve had it with seeing the ball bounce out of his hands. Even with turning up the "Human Catching" slider all the way to full, they still cannot catch the ball. C’mon, you fixed this for 2K4, so why did you revert to the old formula?

As for Madden, its fluid, responsive gameplay is as good as ever. But now that they added the Defensive Playmaker feature, as well as the Hit Stick, the defense feels more like the real thing. No longer do I have three guys covering the receiver, only to have the receiver make a perfect catch each time.

ESPN builds on their online head start by offering the ability to set up online leagues and tournaments, and with the addition of the VIP system, it is now possible to download player AIs to compete against them before playing against the real player.

While Madden has been online for the PlayStation2 the last two years, this marks the first time they are playable on Xbox Live, and for the first effort they put up a good fight. Madden’s online stat tracking is impressive, but not as deep as ESPN’s VIP. The online mode does, however, feature a real time sports ticker that not only displays actual NFL scores, but other games in baseball, college football, even NASCAR results.

As I mentioned earlier, ESPN is desperate. They will do anything they can to get people to buy their game, whether it is by releasing their product three weeks ahead of schedule or by lowering the price to $20. Is it enough to beat Madden? In my opinion, that answer is a definite no.

Again Madden wins the battle because once again it plays better, and is more generally accepted. Last month I helped out with the Washington Redskins at their training camp, and when they saw an ad for ESPN NFL 2K5, they all scoffed at it. I couldn’t agree more and wouldn’t you know it a few weeks later, they were all playing Madden.

Madden has always been the game of choice by real NFL players for good reason: it plays like the real thing. That’s something that ESPN needs to figure out real soon, that cheap gimmicks like playing against Steve-O or David Arquette isn’t going to get their attention. And while I’m at it ESPN, I must tell you one more thing"FIX THE DROPPED PASSES RIGHT NOW!