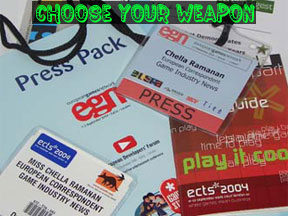 Another year and another week of conference centre air filtered through my system during London Games Week 2004. This year was a strange one, simply because ELSPA decided to set up EGN, a rival show to the long-established ECTS. Already suffering from a steady drop in attendance over recent years, a new kid on the block would surely seal the fate of ECTS. It did, and may even have sealed its own fate.

Now, I'm not blaming ELSPA for taking charge of the situation and giving ECTS a kick up the backside, rather than watch it sink to new lows. Clearly something needed to be done, but the fact that London could barely sustain one show suggests that maybe putting another show on at the same time was not the best option. The result was that in the lead up the industry was generally confused.

At least when it was just ECTS we'd all roll up knowing it would be crap, hoping otherwise and consoling ourselves with the fact that we'd see everyone we knew and do some networking (also see drinking at the bar). Then ELSPA threw a proverbial spanner in the works. Nobody knew who was going to be where. There were suspicions that the draw of Games Stars Live, the consumer show attached to EGN, would win the publishers over. But maybe a sense of nostalgia and misguided loyalty would bring people back to ECTS.

The summer months were consumed by the rival shows hurling insults via the trade press and producing a raft of press releases boasting ‘more,' ‘bigger,' and ‘better.' As the trade show war raged, the industry was left in a state of confusion, which quickly turned to apathy. People that would usually be at ECTS were just not going to bother risking taking a day out to go to the wrong one.

It is clear that having EGN and ECTS on the same days hurt both parties. But ECTS was a shadow of the shadow of its former self. Without the lure of a consumer show, the big name publishers were nowhere to be seen. Come to think of it, even the small name publishers were nowhere to be seen. EGN was busier and definitely lived up to its ‘back to business' tag line. It was all suits and no product. It seems trade shows don't need to be fun. I mean who needs fun, that's not why we work in the games industry, right!?!

In their search for fun, most of the industry was at Game Stars Live playing games and trying to book meetings with people. The fact that Game Stars felt like an ECTS of yesteryear was adding to the bafflement. People didn't want to stay in the spookily-serious and eerily quiet pre-fab hallways of EGN. We all know what all work and no play did to Johnny and we certainly wouldn't want the games industry to become a dull boy.

Meanwhile, across the Channel, performed with deadly German efficiency is a lesser-known show called Leipzig Games Convention. Oh, yes, that's right play chums, another show has entered the fray. According to reports, this year's show had more exclusives than you can shake a stick, including Halo 2 – a week before Game Stars Live. And Kojima snubbed London, in favour of an appearance in Germany, armed with a new MGS2 video. The show has only been running since 2002, but it's already created a winning combination between consumer and trade friendly.

At the moment, the German event is relatively unknown, but as attendance grows year on year, The Leipzig Games Convention is quickly becoming a viable contender for Europe's answer to E3. ECTS and EGN should spend less time squabbling with each other and take a look at what's happening on the Continent before they have nothing left to squabble about.

I'm beginning to wonder if we actually need a European E3 because, well, we have E3. Everyone goes, publishers spend lots of money on stands, do their annual show and tell and everyone goes away tired and happy. I want a European E3 and I want it to be in London, but I'm becoming less and less convinced that the industry needs one or wants to stump up the cash to have one. With all the comparisons to the movie industry, it got me thinking that it doesn't even have an E3, never mind an ECTS or a TGS. Hmm, food for thought.

Roger Bennett of ELSPA has already been reported saying that having two London trade shows at the same time should never be repeated, after this year. There were even hints of the two organisers uniting forces again, which can only be a good thing.

An overview of 2004? Thank god for Game Stars Live that's all I can say. It had a good booty of titles, despite some of them already being on the shelves. But at the end of the day, this was a show concerned with showing the most wanted Christmas line-up. There were, boobs, games and flashy cars. What more could we want? Although, considering ELSPA has released their white paper on women and the games industry, GSL didn't seem to be breaking down any barriers. Even the logo has two boys playing games, without any attempt to be inclusive, but that's a whole different column.

Well, I think we're all looking forward to next year with more trepidation than usual. Let's just hope I'm not reporting from Germany twelve more months down the line.

Best in show: Prince of Persia 2 and Fable

Best moment: actually stepping through the doors of the Halo base ready to play

Worst moment: Seeing the whole of ECTS in two minutes