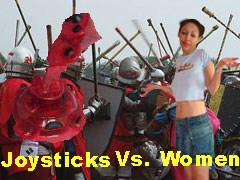 Did you know that 35-49 year old women spend more time online than any other demographic? Women are also the number one players of mobile games. Worldwide, women have an estimated potential spending power of â‚¬14 billion in their wallets. So why are they still so hugely ignored by the games industry? With so much to gain you'd think publishers and developers would be stepping over each other to corner the market. If the winds they are a-changing, they're a-changing almost imperceptibly.

The paper throws up some interesting statistics and highlights the different approach women tend to have to gaming. If the games industry wants to take on Hollywood, then it's going to have to appeal to more than just white, heterosexual males.

In the UK females make up 27.2% of all UK gamers. Second only to British males, this makes them the second largest group in the PAL region. On average they spend 7.2 hours a week playing and prefer PlayStation 1, PS2 and PC. Xbox ranks lowest in the list of their preferred console. I guess I'm just not the typical UK female gamer then.

I knew things were tough, but it turns out that women even have less time to play games. According to the paper, women spend an average of 1hour 30 minutes more on housework than men do. Now, don't get confused here – it's not because we want to, it's because you lazy blighters don't mind living in your own filth and we do.

The upshot of all this is that women prefer a pick-up and play experience. They can't be there building their character for three hours, they just want to shoot some stuff, win a race, solve a puzzle or complete a mission. This lack of time to invest is reflected in the fact that 67% of players on puzzle, trivia and card game portals are women. They are aged 35-49, play for up to 40 minutes and pay subscriptions. That's money. And a gamer from a mature demographic like this will have a lot more money to spend than your average 22 year old.

Although this is all very positive and offers a great way of tapping into the female market, I'd hate to think that women are going to be forever saddled with solitaire and mah jong games. Sims Online is one of the great success stories of appealing to a mainstream audience without skimping on quality. An impressive 53% of the Sims player base is female. And interestingly the whitepaper reveals that the studio behind the Sims, Maxis, is one of the few to boast that 45% of its developers are female.

So, do you see how this works? More women enter the industry and make games that offer a more diverse approach to gaming. Then more women buy and play games and everyone makes more money and even more women want to enter the industry. All of a sudden the industry's booming, it's taken seriously everywhere and gaming is the new Hollywood (if that's what we really want, but I'm not so sure).

The employment figures are still fairly disappointing when it comes to women in the industry. The UK has the highest number of games development studios in Europe, employing approximately 8,000 people. Sadly, of the UK employees only 16% are women, which leads to more games made for, by, and marketed to men.

Of all the companies, 42.9% advertise in specialist magazines and 64.3% recruit through specialist agencies. So how do women find out about these jobs? The short answer is they don't. Leading UK games recruitment agency Aardvark Swift placed 375 men and just 38 women out of a total of 413 in 2002-2003. The White Paper also reveals that female UK games professionals earn Â£374 less on their starting salary and progress more slowly through the industry. Between 2002 and 2003, the percentage of females working in the industry rose from 20.4% to a meagre 22.9%.

The fact is that something needs to change, and in fact a whole host of things need to change. The industry has to break this vicious circle it's going to avoid stagnating. Things are moving along slowly, but as a female gamer it all seems like to little and so much more could be happening. Games marketing has a lot to answer for, frequently missing the opportunities to draw in more female gamers by going for the lowest common denominator on advertising campaigns – otherwise known as the old "T and A" campaign. DOA Volleyball and GBA SP are two examples of missing the female boat completely.

The White Paper was a refreshing surprise at that early morning press briefing and actually made the hellish journey worthwhile. You can download Chicks and Joysticks free of charge at www.elspa.com. Go on – you might learn something.

Most played: Champions of Norrath