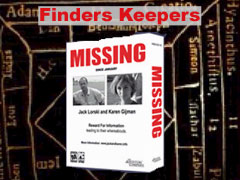 The Maker of Missing Tells Us How It’s Done

Simply speaking, "MISSING: Since January" is a very frightening experience, as you attempt to follow the trail of a missing journalist, to find that the situation is much more complicated than it first appears. Using video and sound footage, you are taken on a tour through the quite disturbing world of a serial killer.

GiN caught up with Eric Viennot, the author of MISSING. He answered some questions about the game, what he’s done in the past, and what he’ll be doing in the future.

GiN: Can you tell us a bit about your game-writing background?

Viennot: I used to teach art at the Sorbone University, but after five years I decided to create a communication company. My company, Lexis Numérique, specializes in creating web sites and communication tools for large companies.

But as I don’t like doing things like everyone else, I decided to create something that would show that communication tools can be fun. This took the form of a children’s adventure game. That was in 1996 and it was called "Uncle Albert’s Magical Album."

After showing it to a few people, I was encouraged to show it to a publisher. I’ve got to say I was well advised: Uncle Albert is now one of the most popular characters in France and we’re about to publish a 7th episode later this year.

This situation prompted us to create a new department specializing in game creation (which is now 80% of our business). We’ve published about 30 kids’ games so far (including edutainment games for Disney or adaptations of very famous licenses for Ubisoft or Emme).

As I didn’t want to focus on kids’ games only, I decided to work on something more mature that was also part of my personality. That’s one of the reasons why I began to work on MISSING: Since January"

GiN: When and how did you get the idea to make a game like MISSING?

Viennot: The idea of Missing came from a very special experience I had a few years ago. I did an internet search on an author’s name, and I ended up on a confidential site. This gave me the very exciting feeling that I was somewhat of a hacker. One thing led to another, and I found out loads of things about this guy who – as it turned out – had a namesake.

But for a few hours, I was actually sort of living a thrilling real-life detective story. This convinced me that the internet could be used in a way that very few people had tested before. It also convinced me that playing your own role instead of a superhero or a super-detective creates something very, very, very special.

GiN: Is the character of the Phoenix modeled after any historical serial killers?

Viennot: In fact I was more inspired by the atmospheres of authors like Elroy, Connely or Maurice G. Dantec rather than by specific characters.

Contrary to what you might expect, it wasn’t the killer’s character that created the story – as in real life. Quite the opposite happened. The plot, with its twists and turns, shaped the profile of the killer. So his penchants for the past and esotericism were dictated by the plot and the game concept.

GiN: Much of the game seems to be involved with more esoteric fields of study. How much does this interest you personally?

Viennot: To be honest, I came to esotericism more by convenience than by personal interest. The symbols, the vocabulary, the atmosphere and the perception people have of it is fascinating for everyone trying to write a scenario for a game"

But in doing so, I had to read tons of books, some of which were really hard to get, and I began to discover a fascinating world that is much more prominent in our every-day life than we might think.

GiN: In MISSING, the player has many real first-person experiences (such as receiving email). How does this work within the context of the game?

Viennot: In fact, the player always has a real first-person experience: Jack Lorski, a journalist, has been abducted by a serial killer ("The Phoenix") along with his girl friend (Karen).

The Phoenix could have sent a book or a letter, but as staying true to this century, he decides to send a CD-ROM to SKL Network, the agency Jack works for. To save time, SKL decides to publish this CD-ROM as widely as possible and asks for help from any good, willing person.

So you play yourself, trying to decipher the Phoenix’s CD-ROM and trying to get into the life of someone who is missing. On this CD-ROM, you can find excerpts of Jack’s video log (Jack was filming his investigation).

Most of the time you will feel like a real investigator, but sometimes, you’ll also feel like a peeping Tom, especially when you discover videos of Jack and Karen that don’t seem to be related to the murders.

GiN: How important was casting just the right actors for the roles of the game characters?

Viennot: Thank you for asking the question. This was simply essential. I opted for full motion video instead of 3D because I wanted the player to actually feel something for the people he is trying to save.

Hence, it was really important that you feel Karen’s pain when she’s crying, or their happiness when they discover that they can be more than co-workers, that they actually love each other (which is not the case at the beginning of the investigation).

I also wanted Jack to be as credible as possible. He’s not a superhero; he’s a journalist trying to do his job as best as he can. Even by taking real risks.

GiN: Did you and your people find the creation and design of all the fake websites a bit tedious?

Viennot: Yes and no. As our company is originally dedicated to creating websites, it was technically quite easy. The big problem was that all our designers are experienced professionals, and they do "nice" things, even when they try to create fake amateurish sites.

They made sites, and most of the time, you could tell it was done by professionals.

To solve this problem, we hired people that had very little experience in web design (and some of whom had really bad taste {smiles}), and at the end of the day, it worked very well.

GiN: How difficult was it to secure partnerships with companies to host game-related info in certain sections of their websites?

Viennot: We did secure a partnership with many large companies including famous newspapers.

The big problem was to convince them to put fake information on their real sites. We eventually found a technical solution: fake articles can’t be found when searching on a browser, you’ve got to search for specific key words on the sites’ search engine, if you send the like of a fake article to a friend, the mention "this article is related to fiction" appears.

But all in all, it took about two years and many, many, many meetings to make it happen.

We also very easily put fake information on large sites. Many characters of the game have posted comments about books they liked (or not) on Amazon.com, they belong to student or professional associations etc.

We are still looking for partners to deepen the background, so if you feel obliged, please contact us!

GiN: How much modification to the original game (In Memoriam) was necessary to make it ready for U.S. release?

Viennot: We adapted about 5% of the game for the American and Canadian audience. We’ve carried a survey on about 5000 players and it appeared that more than 93% of them told us that the really liked it as such.

But as we wanted to be as realistic as possible in the European version, something happens at the end of the game, and yet something else happens 3 weeks after you’ve finished the game (or so you thought).

We realized that 3 weeks was a little bit long, so we made it MUCH shorter.

Another thing is that once you’ve finished the game, American players will have a very special reward that European players don’t"

The last thing that I’ve got to admit is that the protection system caused some bugs for about 3% of the players interviewed in the survey. This is something we were very concerned about. We’ve corrected that and we have included all patches that were released in Europe in the U.S. build.

GiN: What major differences have you noticed between making games for U.S. and European audiences?

Viennot: This question is hard to answer because Europe is very eclectic. Games that sell very well in one country can sell poorly in another one. In fact, as regards to its game industry, Europe is divided into as many countries as it’s made of.

But one thing I really appreciate with the American audience is that games are more widely considered a normal hobby than in many European countries. The consequence is that casual gaming is much bigger in the U.S. and my personal belief is that the future of this industry is great casual games.

When I say "great casual games," I mean games that have a story that can appeal to many people (which is generally the case with good movies) AND good gameplay. I’m confident that heroic fantasy and combat are not the only way to reach a large audience.

GiN: Do you have any future game-creation plans?

Viennot: Yes. We are currently working on two adventure games. The first one is a 3D kids’ game and the other is a 3D adventure game that has a real gameplay innovation (more classic in its form than MISSING though)" But it’s a little bit early to talk about it.

Another one we’re going to ship in 2005 is something very different: the code name is ICB. To make it simple, I could say it’s Super Monkey Ball meets Mario Kart meets Wipe Out meets Counter Strike. {smiles}

You can play with seven other players in all classic game modes (CTF, KOTH, DM etc.) and in many other funny modes. You can also create you own maps and game modes very easily.

This should appeal to all fun party gamers, but also to many FPS addicts (no violence, no blood though {smiles}).