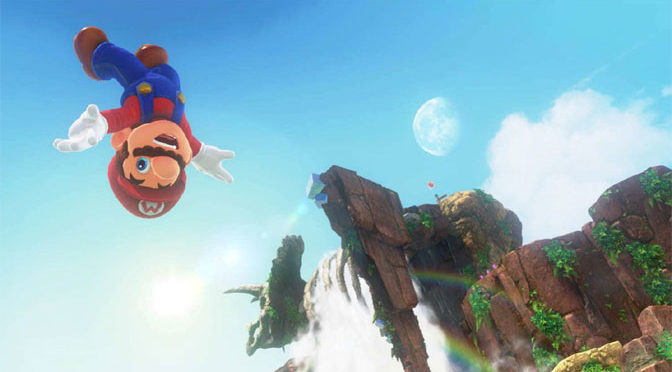 Mario has been through a lot. He has ventured through lava-filled castles no less than 64 times, he’s walked on literal Sunshine, and has been across the Galaxy and back again. Mario Odyssey is the latest entry in the popular 3D Mario series, featuring collectathon gameplay very reminiscent of Super Mario 64 and Banjo Kazooie. Mario Galaxy 2 was more linear, placing players on specified track areas that they could explore to acquire a single star. Odyssey embraces the collectathon designs of older games from the 64 era- so does Odyssey take us for a spin, or do we lose our luggage in the airport? Let’s find out.

Mario, the portly plumber protagonist known worldwide, has been on quite a number of adventures- many of them involving the rescue of his royal flame, Princess Peach. Mario Odyssey is really no different in this regard, as Bowser kidnaps Peach and steals items from various kingdoms around the world in order to make his dream wedding with Peach. It’s up to Mario, who is recently unemployed, to stop him (he’s officially no longer a plumber; look it up). Or… it would be up to Mario, if Bowser’s sweet hat didn’t punch his lights out and resulting in Mario getting tossed off an airship in mid-flight as well as the destruction of Mario’s iconic hat. 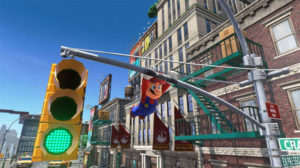 Thankfully, Mario lands in a kingdom inhabited by a race of hat people (what are the odds?), and meets a young hat child. This child, named Cappy, wishes to rescue his sister whom Bowser kidnapped to be Peach’s wedding tiara. Conveniently, Cappy has no qualms with being Mario’s projectile attack for the remainder of this 10-100 hour adventure, and the stage is set for Mario and pal to chase Bowser across the world using a ship powered by Power Moons.

The story of Mario games are always really simple, and what you see is what you get: Most of the kingdoms you visit will have different inhabitants who will complain about Bowser arriving moments before you and tossing up the place, stealing giant wedding cakes, soda water, and engagement rings. The fun in Mario Odyssey comes from collecting the various Moons that are strewn about each map, which is why Odyssey could take you practically no time at all to beat, but require a hefty time investment in order to fully complete. 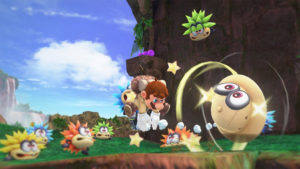 The major mechanic of Odyssey revolves around Mario’s new friend, Cappy. Mario can throw Cappy like a boomerang style weapon, and he can jump off of him as he spins in the air, creating one of the most agile, complex, yet pleasant to control Marios since Sunshine. Notwithstanding, what most people care about is Cappy’s power to possess various enemies and objects: By simply tossing his hat, Mario can control enemies throughout the game, causing them to don the signature mustache. A tyrannosaurus rex or Blooper featuring the ‘stache is pretty amusing at first, and while the novelty of the facial hair may wear off after some time, what does not is just how incredible the addition of Cappy is.

Reaching ledges you couldn’t before as the little onion guys with stretchy legs, using a woodpecker enemy to fling yourself along a (seemingly) hidden path to discover purple coins or a moon, controlling a Wiggler to get around a ledge you may not have normally been able to jump to… heck, you can even control an RC car in a kart racing minigame featuring Mario Kart music. Controlling enemies makes the game, and each world was painstakingly crafted with the ability to control them in mind, so you’ll almost always be rewarded for exploring as different enemy types. 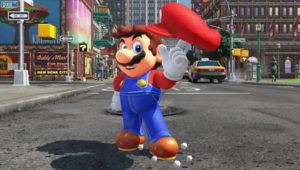 With each new world Mario ventures to, you may be presented with missions that lead you toward Moons, and eventually, some really inventive boss battles. Interestingly, while each kingdom may have between 40-60 Moons to collect, only around ten or so are needed to progress to the next kingdom. Moons are extremely abundant and, in many cases, quite easy to obtain given that you are willing to explore and find all you can. Some moons are prolific and obvious, while others may require a bit of skill or know how in order to reveal, which means that both a five-year-old and a fifty year old could easily get mileage out of this game, assuming, of course, both like platforming collectathon style games.

[amazon asin=B01MY7GHKJ&text=Grab your own magic hat and head over to Amazon to grab your copy of Super Mario Odyssey!] 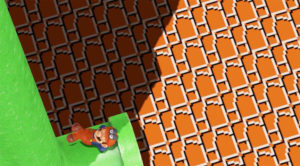 Each kingdom of Mario Odyssey has a currency that is only spent on goods in that kingdom. The larger kingdoms tend to have 100 purple coins with the others having fewer, but collecting all of these coins throughout the landscape doesn’t just get you more moons – why, that’d be silly (*cough*looking at your blue coins, Mario Sunshine)! Instead, they let you dress Mario up in all sorts of amusing outfits like a cowboy, mechanic, and of course, fedora-wearing mafia Mario, because nothing says Italian like giving someone an offer they can’t refuse. You can also spend the coins on knickknacks or stickers for Mario’s airship, the Odyssey, and the souvenirs, while cute, are something I don’t find as appealing as dressing Mario up as his own brother or even in Peach’s wedding dress. They’re still nice bonuses that show how far you’ve come toward 100 percent completion, though.

Exploring every nook and cranny of Mario Odyssey is what makes the game really shine. Yes, you can beat it in under ten hours- but why would you only want to play through 10% of the game? Odyssey is like a love letter to all the things that made prior 3D Mario titles great- there are great platforming challenges, especially in the latter two kingdoms of the game. For those who like quick mini games that reward you in rapid fire succession, Odyssey has that, too. 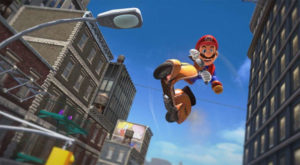 There’s something to the tune of 880 moons in the game, with only a small number of them being required to beat the game, as mentioned previously. Collecting moons isn’t just ground pounding glowing spots or beating bosses- some require you find seeds strewn about the level and plant them, while some may require you replicate a photo from memory by possessing the pieces that make up facial features, being rewarded with a moon if you’re accurate enough.

Moons are available everywhere- in hidden challenge rooms, from shiny enemies, even from a butterfly that you mercilessly smacked with your talking hat companion. Odyssey features a very steady stream of rewards all the way through the game, even up to its hardest challenges, after the credits roll. There’s so much breaking up the pace of Mario Odyssey that it’s hard to get bored if you’re even remotely a fan of platforming games. 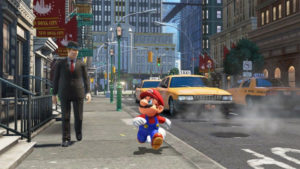 There are motion controls in Super Mario Odyssey, though they’re not required if you’re absolutely abhorred by such a thing. Many actions, such as doing a spin attack with Cappy, can be performed without motion controls by spinning the control stick and then tossing the hat, and while you can shake the controller to do a high jump as a frog, for example, I can’t even recall a single time the game required that to collect a moon. Those who hate motion controls have nothing to worry about in this game.

The graphics are spectacular for a Mario title. The game runs buttery smooth, both docked and undocked, with no FPS drops in sight. This isn’t a repeat of Breath of the Wild, thankfully, as Mario Odyssey has no performance issues and runs steadily at seemingly all times. Mario games, at least those without New in the title, are known for their musical scores, and Odyssey has quite the impressive soundtrack behind it. Several tracks stand out as some of the best in the series, and even songs that Nintendo seems entirely too proud of for its own good, like Jump Up, Superstar, are incredibly catchy and will stick with you once you turn off the game system. 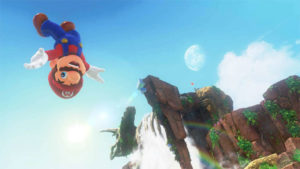 Overall, Mario Odyssey is an excellent 3D Mario title. Very much like Banjo Kazooie in its collectathon elements, players basically move from world to world and told to go explore and find enough jigsaw sprites to get to the next stage. Beating the final boss opens up new moons to collect in every single kingdom prior, with the game’s hardest challenge being unlocked if a player manages to collect 500 of the game’s magical MacGuffins. Due to a constant rewards stream, it’s very easy to get addicted to hunting for moons, even if it means failing that accursed jump rope mini game five more times before finally acing it and collecting the last moon in the Metro Kingdom. Those who dislike platformers or collectathons would do well to avoid Super Mario Odyssey. For almost everyone else, however, Mario Odyssey can be a great way to waste tens of hours.