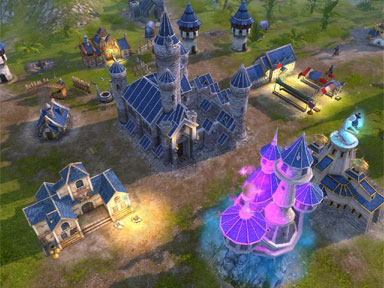 Nine years ago when we reviewed Majesty, we were a little taken aback. Here was a real time strategy game where you didn’t actually control your units (called heroes), at least not directly. So no tank rushes or tree chopping was needed.

Instead you had to bribe your troops to do your bidding, and they didn’t always listen to what you said, or did things in a different way than you were expecting. It was all a little frustrating, but also very addictive. The game was extremely popular, yet no sequels were made. And oddly enough, we’ve not seen anyone try to copy that style of play either. When developer Cyberlore Studios closed down, it seemed like Majesty was doomed. But then Paradox Interactive acquired the rights to the game, and chose InoCo as the new developer in a bit of a competition. The result is Majesty 2: The Fantasy Kingdom Sim, a very modern version of that classic game.

Of course Majesty 2 has all the modern things you would expect from a game, like beautiful 3D graphics and the ability to zoom and scroll around on the map. Don’t laugh, the original didn’t.

But Majesty 2 also improves on the gameplay from before. One of the best things about the game is that if you’re playing the campaign, the difficulty levels up slowly. You can’t play the more difficult campaigns until you master the easier ones. And although the game is always challenging, I’ve not run into any levels that were impossible, which again, is different from the original that had insane difficulty near the end of the game.

Majesty was a humorous game too, and thankfully, this has been kept and even improved with Majesty 2. Of course the pre-mission briefings are hilarious. Your advisor sounds a bit like Sean Connery and when he talks you get the idea that he’s a bit of a silver-tongued type who may not exactly have your best interests at heart, though he’s a joy to have around nonetheless. The monsters are mostly funny too, like the rat king who erupts from the sewers from time to time in one mission with chants of "Mine! Mine! Mine!"

In terms of voice acting, everyone does really well with funny quips, but only the advisor has a real long speaking part.

When you start a level, you have a central castle and a couple peasant houses. You have a few guards, but no real control over anything. The first thing that you need to do is build guilds so that you can recruit heroes. Different types of guilds produce different heroes. So if you are being attacked by a lot of undead, you should invest in a cleric’s guild since that is their specialty. Or if wild animals are your problem, a ranger’s guild will help to get things under control. You can recruit up to three heroes per guild. They live there and will return to that site if injured or simply bored.

To influence your heroes, you have to put incentives in the world. So if a graveyard is generating skeletons, you can place an attack flag there. Once you start adding money to the flag, heroes will begin to show an interest. This is based on the distance from your town to the flag, the level of hero and the difficulty of the monsters involved. So a simple 100 gold reward might be okay for a bear’s den right outside town, but if you want to bring down a minotaur pyramid across the map, expect to pay big bucks to get your heroes moving out that way. Money goes right out of your treasury when you place the flag, and is divided up among the heroes who responded once the goal is met. You have attack, explore and defend flags.

Giving your heroes money is a good thing, because heroes will use that money to improve their weapons and armor.

Heroes won’t always do nothing. If a bad guy is attacking the town and they happen to be nearby, they will attack for you. And they earn a bit of free gold when they do. It’s just that major objectives like destroying spawn points won’t happen without a little golden push from you.

You earn money in the game through taxes. You have tax collectors who will visit buildings and gather gold. They have to stay alive long enough to get back to your castle or to a guard tower. There are also trading posts which spawn mules that give you gold once they get back to your market. I’ve made a ton of money on the trading posts, but they are normally far away from your town, so you have to make them into a little secured compound to keep them safe. Having the heroes guard them while your peasants build is a good strategy. Higher level trade posts can somewhat defend themselves, but putting a guard tower nearby is always helpful.

Each mission you are given has objectives which need to be met. These can be to kill some huge monster on the other side of the map, or build up a new type of defensive structure, or to help out an ally in some way. This is all done by bribing your heroes to do your will.

On the negative side, I found that it was often easier to ignore mission objectives and build up my town and heroes for a very long time. Then it made rolling over mission objectives pretty easy. The game sometimes didn’t know how to handle this and would tell me I had completed objectives even though heroes didn’t get anywhere near the targeted area. In one case I actually killed the big bad guy of the mission by accident because he wandered into my very-well defended town before I did the other objectives that were supposedly needed to stop him. But I’m a very defensive player, so this probably won’t happen to most people.

Majesty 2: The Fantasy Kingdom Sim is a thoroughly enjoyable game that had me staying up far too late into the night just to find out what was over the next hill.

The original Majesty was truly a horse of a different color when it was released nine years ago, and kudos goes to Paradox for bringing it back from the dead. Majesty 2: The Fantasy Kingdom Sim is a great title in its own right, and can be enjoyed by players of all skill levels and from the hardcore to the casual gamer. Crown yourself and pick this one up.