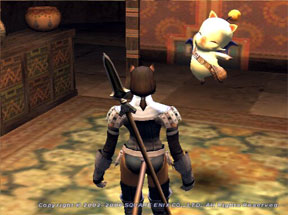 I’m sure in the past many of you readers know of my tumultuous relationship with the Final Fantasy series. While I may have enjoyed playing the original NES version, as it went on to the Super Nintendo version of Final Fantasy III (VI in Japan) it started to become frustrating with so many cheap shot attacks by enemy NPCs. That frustration turned into complete anger when VII came out for the PlayStation, as I had to suffer through FMV like spells that took several minutes to complete.

Need I even mention how sick I was by seeing Sephiroth perform his Super Nova spell? I actually skipped through VII and IX, but gave X a try. I actually liked X, mainly because when I selected an attack, it was done instantly, rather than waiting until I got ambushed over and over again.

But seeing how XI differs from the series by being an MMORPG, I decided to give the PlayStation 2 version a try. I figured why not? After all, if I didn’t care for the game, at least I’ll have a 40GB hard drive to store all my backup files with.

This was right after going through Phantasy Star Online, an MMORPG I really enjoyed playing on the Xbox because of the online community, but before the tedium of meaningless hunting that other MMOs like Evercrack and Star Wars Galaxies had me endure in order to level up.

Final Fantasy XI on the PS2 ended me up on the same route that the later MMOs went, with the slow leveling up in a certain area, and it was only when I was lucky enough to find a group to party with, then I was able to explore new territories.

But that was back in 2004. It is two years later, and Square Enix makes their first FF title for the Xbox 360. For a system that centers its game universe around Xbox Live, it was not a surprise that Final Fantasy XI Online would be the choice. But the strange concept is that you don’t have to be an Xbox Live Gold subscriber to play it.

That is because FFXI doesn’t use Live as its game engine, but rather their PlayOnline service. When you load the disc for the first time, it will install PlayOnline to the hard drive, but that is the first of many installs that needs to be done. The biggest wait is for FFXI to install, which takes two hours at first, but then it needs to be updated, and that took me six hours to complete! In the end, FFXI will take up almost 6 GB on your hard drive.

Anyone who is familiar with the PS2 or PC versions of FFXI will feel quite at home with the 360 version. Even better, for those with a USB keyboard, you can use it in conjunction with the gamepad. However, there is no mouse support, and I still don’t believe that Microsoft will ever allow that. While most of the game can be played with just the 360 controller, having the keyboard ready for quick communication is a big plus.

In addition to the original FFXI, the 360 version includes all the expansion packs: Rise of the Zilart, Chains of Promathia, and the recently released Treasures of Aht Urghan. PS2 and PC players will have to pay extra to purchase the expansion pack, but 360 owners will already have it, and that makes the 360 version the best value for anyone who wants to get started in the FFXI universe. Still, after the 30 day initial trial period, the $12.95/month subscription fee can be a bit much for some players. At least if the trial period ends in the middle of the month, the next month’s fee is prorated.

Because of the high definition capabilities of the 360, all the menus and on screen text (at default) are quite small, and don’t obstruct the display as much as the PS2 version. It does help at times, but for those who have trouble seeing there is an option to increase the text size.

Visually the game looks exactly the same as the PS2 and PC versions, maybe a bit sharper, but there is still a slowdown when a lot of player characters are on at the same time. Latency issues? I’m not sure, but since the FFXI universe has all players (360, PC, and PS2,) it would make sense.

In the end, deciding on whether to get FFXI for your Xbox 360 is whether or not you like MMOs or are a fan of the FF series. If you don’t like either, there really is no choice to jump to the 360 version, but if you’re a fan, you’ll feel quite at home. Just expect to spend a lot of time upgrading your character, as well as a lot of money ($13/month) to do so.