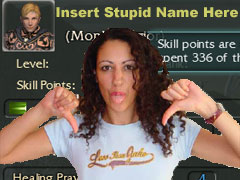 There I was, all kitted out in my ranger gear, a leather knap-sack on my back, flowers in my hair and a bow and arrow over one shoulder. I was all ready for my quest and the town was bristling with adventurers ready to fight the scourge that were threatening the kingdom. We were in the midst of a war and all were prepared for injury and even death.

But then God Almighty ran past. He didn't look how I expected God to look, although he did have a big white beard. It was just the armour and the broad sword that threw me. I guess the whole war thing had got God really pissed and he'd come down to sort things out.

I mean if we've got God Almighty himself on our side what hope does the enemy have? But of course it wasn't God Almighty at all, it was some numpty who couldn't think up a decent name for his character in Guild Wars.

See, in a role playing environment when God Almighty shows up it kind of renders all fights between good and evil kind of irrelevant because, well"God kicks ass. I'm assuming he does because he has wrath and doth send it down upon us if we worship idols and covet our neighbour's wife and stuff like that. Therefore the dimwit that called himself God Almighty is actually breaking the spell because we all know he's not God, just like we all know I'm not actually a foxy little ranger girl who can tame wild cats and have them do her bidding.

The point is, I'm pretending to be a ranger girl, but when God shows up it kind of ruins the party. And when I'm running through Ascalon the last person I expect to bump into is Obi Wan. Yes, that's right, apparently there's a wormhole that takes you from Tatooine straight into the Guild Wars universe.

Now, why oh why would anybody be so lame as to name their character Obi Wan? It's not even a Star Wars game and even if it was it would still be lame. But it could never be as lame as Legolas the Dude.

Now there are several points I take issue with when it comes to Legolas the Dude. First, you've called yourself Legolas – get a f***ing imagination. Second, somebody else has obviously taken Legolas, which is why you've tagged ‘the Dude' on the end – when the crap name you've chosen is taken, just leave it rather than insisting on bastardising it. Third, you've used the word ‘dude' in the context of a pseudo-medieval world. Now correct me if I'm wrong but ‘dude' is a 20th century slang term and therefore is utterly inappropriate.

These players who seem incapable of thinking up their own character names are a persistently unimaginative bunch. If at first they can't succeed they will try and try and try and try again. This is when you get the likes of Aaragoon. On analysis, not only was Aragorn taken, but Aaragorn must have been taken too, leading the poor soul to settle for Aaragoon. This moniker is so bad it is actually hilarious, but alas I'm not convinced the humour was intentional.

But the prize for the most er"creative name has to go to Crow Ching Tiger. That is bad beyond belief and the most tragic thing is the amount of thought that must have gone into it.

Now, one must ask oneself does the fault lie with the gamers who can't think, or the game developers who fail to put adequate name filters on. EverQuest II has gone to the other extreme and only allows you to have one name and no three letter names, so that rules God Almighty right out. Even, ‘The', ‘Lord' and ‘Count' are not allowed. This tight a filter wouldn't work on the ‘City of' games, but surely we could find a way of keeping L00k Skywalker out of the picture.

With Age of Conan and Lord of the Rings online coming soon, we can only hope that the necessary filters will be in place. How far can these people go to get Aragorn or Legolas? The mind boggles and then we shall weep.

My solution is to create a special guild just for them called ‘The Sacred Brotherhood of Couldn't Get the Name We Wanted so Used Numbers to Make Up This S**t One Instead'.