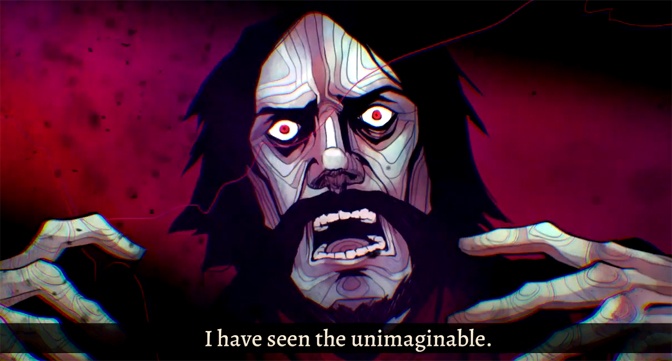 Growing up I loved reading all things Stephen King and fell in love with the horror genre. By the time I graduated high school I had read The Stand, Misery, The Gunslinger and Duma Key. These books help me grow an appreciation for all things monster and creepy. Alder’s Blood is very reminiscent of The Dark Tower series in terms of the setting and the graphic novel series in terms of art style. 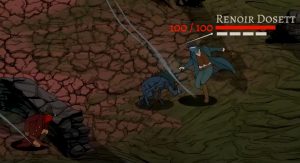 Alder’s Blood is a turn-based strategy game where your group of hunters have to eliminate various monsters in each level. The main mechanic that separates it from other turn-based strategy games is managing your scent. Each hunter will leave a scent that goes downwind and will attract monsters who catch it. The mechanic adds an interesting step to the challenge maps and sets up potential mission-ruining issues.

The game opens up pretty quick and allows you to take on side quests. The story has a very Lovecraftian feel to it as there are hints to a great cosmic evil looming over the world. Also, there is “corruption” which acts like madness of sorts. Each of the voice actors did an incredible job with bringing the story to life. The player acts as the chief of a hunting party which implements a resource management side to the game as well. 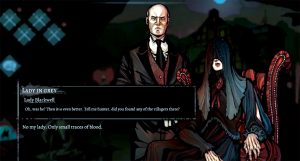 Placing a lot of mechanics in a game can be risky. If a title is pulled is too many directions it can dilute the game. Final Fantasy X shoved Blitzball in without detracting from the game play. Dark Cloud 2 worked in crafting and town building to improve the core experience. Alder’s Blood…kind of felt like Oregon Trail, which is a good thing and it mostly fit with the plot. But for me, it pulled away too much from the horror elements which is why I was there in the first place. Others might enjoy it, but it was a little bit of a distraction for me.

Gameplay also presented some issues that I want to complain about. The first was when I gave a hunter a gun so that I could have a second gunslinger on my four man team, but he would not use the weapon at all. I could not find any reason why this person could not use the firearm. Secondly, every hunter gained corruption (which operates similar to madness if you play pen and paper Call of Cthulhu) from every battle and every kill. While you can sacrifice a severely addled hunter and transfer their power to someone else, it felt like I was being punished for using my people. Plus, that’s kind of an evil act, so shouldn’t I get corruption for doing that?

I also wished that the people you employed were not so expendable because I feel that would have enhanced the plot. You see that from turn based strategy games such as Fire Emblem and Valkyria Chronicles where you really start to care about your people as you build out an A-Team. This was also a core mechanic in the excellent XCOM: Chimera Squad game, another turn-based combat title that was recently released. 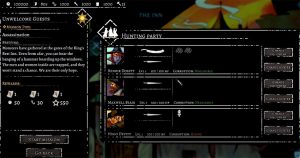 Instead, with Alder’s Blood it’s just random battles that failed to enhance the story, fought with warriors where you don’t even need to really learn their names. In addition, I hate that once you make a single mistake it causes a cascade of issues that you can’t fix because of the stealth basis of the game. As in, one misstep can cause you to lose all of your people to permadeath. 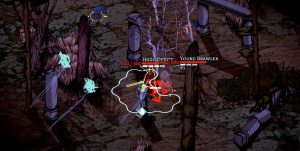 Overall, Alder’s Blood had some mechanical issues that could use some polishing, plus a beefier story. It sounds like I am being harsh, but I really did enjoy my time with Alder’s Blood. It’s just that the game has so much potential that it could have been really, amazingly great. It’s still a solid 4 GiN Gem title because the combat flows well and the world is certainly unique.

At the end of the day, a game is supposed to be fun and make you want to keep playing. Alder’s Blood checks that important box and offers some unique qualities in the process. And now, dear gamer, if you don’t mind I am going to go back to reading Stephen King since I can’t come into the office yet. The risk chart over there is still sitting at Resident Evil.