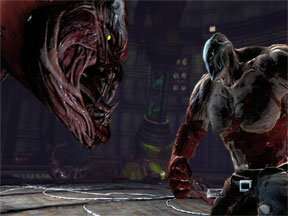 The effort to tear Splatterhouse away from all the other mindlessly bloody and violent games is a monumental one.

On one hand, the heart and joy that goes into a good game is definitely present here. The production value surrounding the game is high. The details, extras and menus are intricate. The gameplay, however, leaves much to be desired.

The motivation for the main character, Rick, is one that all two-dimensional characters have been assigned throughout history. Bad man takes girl, good guy chases to rescue her. The twist comes along as the good guy has been forever linked to a murderous being who takes the form on a wise-cracking mask. The mask has the ability to transform Rick’s physiology so he becomes stronger, larger and virtually unkillable thanks to regenerative powers.

The adventure ensues as Rick chases after Dr. Herbert West and his girlfriend Jenny. Along the way, Rick must battle through the various creepy-crawly fiends that would keep him away from that goal-not to mention the side missions of finding all the risquÃ© photographs of Jen that are scattered throughout the haunted mansion.

Added to this base plotline are the allusions and tossbacks to the works of H.P. Lovecraft, many of which are on the border of being overly used in popular media.

While many minute features have been added to Splatterhouse, often these attempts seem like he developers were simply placing attractive ornaments on a sickly tree. Do gamers like the fact that the producers went out and gained the involvement of metal bands for the soundtrack? That all three of the original Splatterhouse games were included as unlockables? That comic book writer Gordon Rennie plotted the story? Sure.

However, if all this effort applies to little more than a button-masher gaming experience, we’re not going to be overly convinced that what we’re playing is quality entertainment. More often than not, gamers are going to sense the weak foundation and be critical of it.

Such is the case with Splatterhouse. The massive selection of talent poured into this game has been undermined by repetitive gameplay and a limited selection of attack actions.

Furthermore, far too much emphasis was placed on the shock factor in the game’s story rather than relying on the narrative to gain gamer interest. Throughout the beginning of the title, it feels like some industry shill (garbed in a tacky suit and sipping on an "extreme" energy drink) is standing over your shoulder and calling "Whoa! Man! Look at all the blood! Can you believe we were allowed to put all that blood in a game? That’s intense, man!"

Subtle, this game is not, which is sad because if you are able to get to the game’s ending, you might find that the story has some merit, that the characters become a little more rounded, and that the game takes a step in a less juvenile direction.

Getting to that point of the game-the ending sequence-might be more of an effort than most would care to wish with this particular title.