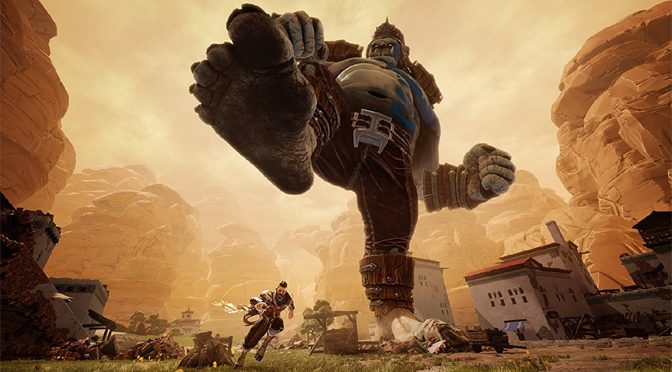 David and Goliath; you know the story. The little guy kills the big thing harassing him and his people. This story has been the archetype for many tales ranging from Attack on Titan to Shadow of the Colossus and anime inspired action game Extinction is no different. Taking the role of a hero defending the last bastion of humanity from its monstrous harassers. Whether saving helpless civilians or cutting the heads of giant beasts Extinction creates a fun if not simple struggle against the horde.

Set in an era of knights and kingdoms, Extinction has you stepping into the always climbing boots of Avil, a roguish yet heroic wanderer with a high fade and dab hand for clambering up big things. 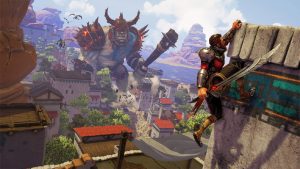 The premise is simple. With the help of your witty magic expert Xandra (no, she doesn’t actually fight — that’s all for you) you need to stop the Ravenii and their jackals, the 150-foot-tall giants and their orcs respectively, from killing everyone and destroying everything. The story itself, while not a master piece of writing, is rather solid, with a few interesting twists and even two possible endings that should keep you interested from start to finish. The voice work done in the game is mostly solid with a few voices that’ll be recognizable including Ben Lepley as Avil who does a solid job portraying a roguish warrior who’s more Robin Hood than knight in shining armor. 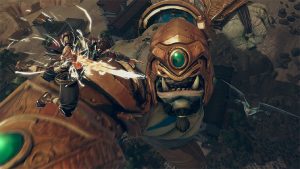 Of course, the real stars of the show are the monstrous Ravenii, you know the giant ogre like monsters you have to kill. Now, if it were that easy it would be no fun, that’s where Extinction begins. Splitting its gameplay essentially into two portions, building your kill strike meter and then using it on the monsters stomping (literally) your cities to dust. You gain meter by killing jackals, rescuing civilians, and doing damage to Ravenii armor and limbs; once it’s built, it’s time to climb up the giant ogres and cut their head off with a quick strike to the base of the neck. Those of you who are familiar with Attack on Titan are having serious Déjà Vu.

[amazon asin=B072M2WG8H&text=Have some giant fun with a copy of Extinction from Amazon!] 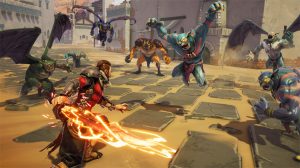 Of course, you don’t just have the Ravenii to worry about, every mission comes with its own set of objectives, some randomized, that can include saving a certain number of civilians, or keeping the city’s extinction gauge (essentially a health bar for the city) above a certain percent. The minute to minute experience is a frantic hack-and-slash through hordes of enemies as you climb up and down buildings and monsters all the same. 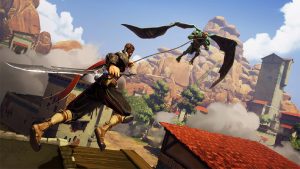 Unfortunately, it rarely grows beyond this, while new jackals and armor added to the Ravenii add some momentary challenge, but the lack of depth becomes apparent. There are some skills to be unlocked such as always having the kill strike meter at 20 percent or higher, but Extinction isn’t as deep any most RPGs. The gameplay still remains fun but can become overwhelming and aggravating, especially due to the climbing mechanics, which you will be using a lot of, often being fiddly and unresponsive as you try to clamber over anything and everything in the world. 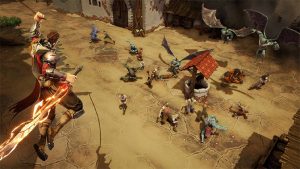 Visually speaking, Extinction is great, with a style that blends comics and anime, the game is visually pleasing. Character designs are interesting and unique while the monsters, while not uncharted territory, are their own breed of disgusting and monstrous. The cutscenes play out like animated comic book panels and are always a joy to watch play out. The music is par for the course and doesn’t hinder the experience in any way shape or form. Overall the art direction is definitely the strongest of all of Extinction’s features. 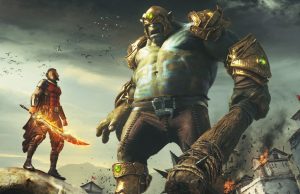 Extinction creates a beautiful world to save and is a game best understood as fun in the moments but struggling in the big picture. While the hack and slash gameplay mixed with the race against the clock nature of the game makes for intense and stressful gameplay it doesn’t seem to grow beyond that. With shallow RPG systems and a lack of variety to level design the more you play the more you kind of wish there was something more. While the game can certainly be fun and challenging, the hefty $60 price tag is a struggle to justify against the depth of the game. Extinction certainly doesn’t put itself on the endangered species list with fun gameplay and excellent style, but it’s price tag and lack of depth prove to a pretty giant hindrance towards it’s otherwise successful traits.