The Walking Dead Season
3 Episodes 4 and 5

It has been said, “It’s not how you start, it’s how you finish.” And that piece of common wisdom applies to the final two episodes of The Walking Dead: A New Frontier: Thicker than Water and From the Gallows. This review, much like our first, will be split into two portions; one for episode four and one for the finale. This review will be as spoiler free as possible but there are some things that cannot be avoided so read at your own risk.

Ever since Javi and the gang got involved with The New Frontier and Richmond’s politics, there has been a quiet far off squeal like a pot of boiling water getting close to boiling over, and episode four Thicker than Water is much of the same. The episode begins with a flashback of Javi and his brother David as they spend time at a batting cage, and continues to develop David as a character and helps you understand why he is who he is. 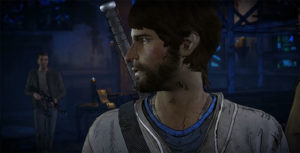 From that point, the episode continues the slow build the previous episode took on, putting the pieces in place for the finale. Overall the episode, content-wise, holds to the same place as the previous episodes, it builds slowly towards a climax but is overall lacking. This isn’t to say the episode is completely forgettable; in fact there are a few moments in particular including a flashback between Clem and Ava, a possible confrontation within the group, and a matter of the heart. It all leads to a dramatic climax that includes a rather surprising choice, along with a few revelations, that sets up the finale well as the pot finally boils over.

If the previous two episodes were the slow, upward, pulse rising, crawl on a roller coaster the finale of season three is the fast never-ending drop. The episode called From the Gallows starts off as the others in a flashback where Javi, David, and their father are playing dominoes. It is a surprisingly emotional start to the episode that sets up arguably one of the best moments of the season later. 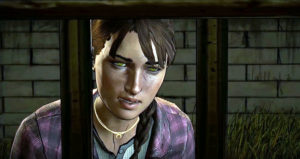 Once you’re back in the current time it quickly becomes a rapid-fire series events that all carry weight and are engrossing. From deciding where you stand with Richmond, to a roof top standoff, to a final confrontation where the lines of family are finally drawn. Each of the choices, minus one that is more of a culmination of previous choices throughout the episodes, feels important and weighted. Even after the roller coaster has come to an end, with the help of a returning face, the tail end of the episode just as good as it softly drifts to an end. With a recount of the lost, an appreciation of the present, and a look toward the future, the finale leaves off with the promise that certain characters story will continue giving us hope for another season. Overall, the finale makes up for the previous two episodes as it fulfills the time of set up within those episodes. There are no real weak points within the episode, though I would be remiss to not mention a particularly important and well written scene between Javi and Clem where both characters, however you play them, truly shine.

[amazon asin=B01LVU0GT9&text=Dont miss out. Start Walking with a copy of the game from Amazon!] From a technical stand point I experienced very few issues throughout either episode, though this is more a result of the lack of freedom within the episodes themselves for these things to occur. As noted throughout this season, one feature greatly lacking in comparison to previous seasons and even in comparison to other TellTale games is the lack of sections where you can move around and explore your surroundings fully. To my memory, there are only two or three sections where this occurs and none of them really allow you to find those small things that previous seasons have offered. While it could be tedious at times, I still enjoyed stumbling upon something like unmarked food or a weapon and deciding what to do with or without it. The lack of this, while not huge, I believe is still worth mentioning. 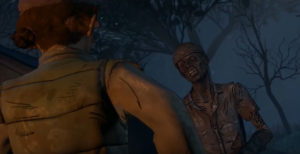 Artistically the game still looks good despite the animation glitches that still show up throughout that will draw your eye. Zombies, as they are numerous in these episodes, are particularly more detailed as is the gore they leave behind. Variation in character models is appreciated as it helps diversify the environment, which is unfortunately a little less noticeable, though there is a particularly eye-catching moment in the finale on top of a rooftop looking down on Richmond that is quite beautiful. Character animation, especially close physical interaction is still kind of “pushing two dolls together” awkward and becomes more noticeable the longer you look at it.

Voice acting is still as stellar as it has been with only a few short comings here and there. The only real noticeable sound issue is how empty and cheap guns sound in the game. They just sound poppy and cheap, however they aren’t frequent enough to be a problem. Overall, however, the new chapters continue to keep the game moving towards being more and more cinematic.

Despite a lull in episodes three and four, the finale of The Walking Dead: A New Frontier manages to pull it all together in an impactful and resonant resolution. The story has many memorable moments, and holds its own as another entry into the series. Technically there are fewer issues than previous episodes and the episodes have maintained their cinematic nature. Overall the final two episodes of season three come together well and leave us with a promise of more Walking Dead to come.