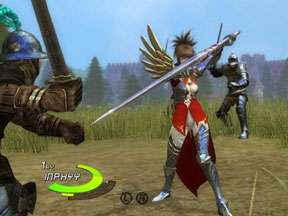 Tetsuya Mizuguchi is a music game genius. Ever since he first created Space Channel 5 for the Dreamcast, we knew that he found his niche. Future titles such as Meteos on the Nintendo DS and the amazing Lumines for PSP and Xbox 360 sealed his position as king of the music puzzle game genre.

However, before Lumines was released on the 360, Mizuguchi had another game idea. That idea was N3: Ninety Nine Nights.

Other publications and websites decided to immediately decry the game as another Dynasty Warriors clone. However, there are a few reviewers out there, myself included, who have never played Dynasty Warriors. As a result, the other guy’s reviews can be a little on the unfair side. For those who have not played the DW series, N3 will be a welcome boost of adrenaline that lasts for a short time.

N3’s gameplay centers on hack and slash combat against vast numbers of enemies. Aided by two platoons, which can consist of light or heavy infantry, pikemen, or archers, players control members of the forces of light, such as the Temple Knights, and basically fight from point A to point B. However, what makes the game good is the feeling of taking on an entire army. Anyone who has seen the massive battles in movies such as Lord of the Rings will feel right at home with the combat system, which consists of simple yet devastating light and heavy attacks.

As foes fall to your character’s weapon, their spirits can be obtained and when the meter is filled, an Orb Spark attack can be executed. These are powerful attacks that can take out a large number of enemies with one quick blow. In addition, those that fall to an Orb Spark will release even more powerful spirits that can build up to a devastating range attack that will kill everyone within a set radius.

And when the body count increases, so does the combo amounts. The first thing I noticed when playing the demo is that my combo meter reached triple digits. In fact, in one massive fight, my combo reached over 2,000-plus hits! Even further, when the battle ended, my body count towered at 2,500! That’s 2,500 bad guys I killed in a single battle. That must be a record for any game.

The fighting is fast and furious, and quite satisfying.

However, there are issues with the combat system. There have been times when the map flashed as if my army was being attacked, but I can’t find a single orc that is attacking. It can be a real pain to locate a needle (some single orc wandering around) in a haystack (my vast army.)

In addition, the army AI can be dumb at times. There were times when I ordered my army to follow and attack, yet they would just stand in place and raise their swords. In addition, the AI results in some very tedious battles. Equipped with a band of archers, I faced a boss who blocked constantly and I could not defeat him because archers sent out a nonstop volley of arrows. It got so bad that I had to quit the mission and replay it with infantry instead. There are some bosses that are a complete bore to fight. One that comes in mind is a giant frog that takes forever to kill.

N3 is a gorgeous game that runs very smooth and fast most of the time on the Xbox 360, of which it is an exclusive title. There were some severe instances of slowdown but nothing that distracts the gameplay.

However, I wish the voice acting was nonexistent because it is at the point of being laughable. The same cannot be said about the amazing epic soundtrack, especially the music that plays during the second stage of Inphyy’s and Aspharr’s stories. The music really makes the game work. Far from being background like we have seen in most other titles, here, it’s the centerpiece.

In the end, N3 is pure mindless fun for anyone who loves the epic battles that are made popular in movies like Lord of the Rings. Anyone who hasn’t played any of the Dynasty Warriors series on PlayStation 2 or Xbox might enjoy N3 more than those who have, but I think everyone should have a good time here.