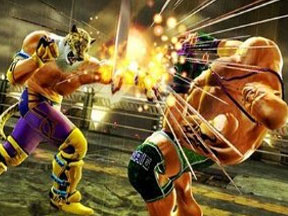 One of my favorite Web shows is called The Spoony Experiment. In it, one of his recurring gags is when he refers to himself as the "Lord of Tekken" in response to a hate mail he received. The character brags about how great he is in Tekken that he would air juggle anyone he challenges, people would ask him for guidance, and even have ladies line up to give him special favors. This character is also taking part in my personal life, as I know someone who claims to be his own version of the "Lord of Tekken" and threatens to beat me all the time. Only recently, however, has he been able to beat me.

Leave it to the release of Tekken 6 to bring that challenge back, especially now that it’s available for the first time on the Xbox 360 as well as the PS3. The previous console titles were all Sony exclusives. For the most part, the translation to the Xbox is pretty much flawless.

The series storyline has always been a strange one for me to figure out, and for Tekken 6 it gets even stranger. From what I can tell, Jin Kazama, who emerged victorious in the fifth King of Iron Fist Tournament, has taken control of his family’s Mishima Zaibatsu, severing all family ties, and going power mad. He declares war on all the nations. His father, Kazuya Mishima, takes control of rival G Corporation and places a bounty on Jin’s head. In retaliation, Jin announces the King of Iron Fist Tournament 6 to hopefully crush G.

That is just the start of the whole storyline, but considering that it encompasses over 42 characters, it would take forever for me to write it. In reality, those who play Tekken care more about the fighting and not as much about the story. I tend to be one of them, and thankfully, the fighting engine is as good as ever. Even with messing it up in Tekken 4, it was brought back to prominence in 5, and fleshed out in 6.

I will admit that I had some issues with some move changes (such as Paul Phoenix’s Heart Punch now being a tap back, hold back, and both punch buttons, adding an additional step) but still, most of the action feels accessible. A new Rage system has been added, giving fighters who are about to be knocked out an extra burst of power. I’ve seen many fights turned around as a result.

The console version of Tekken 6 is based on the arcade Bloodline Rebellion expansion. It introduced eight new characters to the series:
Zafina, an Egyptian fighter determined to prevent the death of the two evil stars, Leo, a German fighter out to avenge his mother’s death assumed to be at the hands of the Mishima Zaibatsu, Miguel Caballero Rojo, a Spaniard matador avenging his sister’s death on her wedding day, Bob, an obese American martial artist, Lars Alexandersson, a former soldier in the Tekken Force, rumored to be a possible illegitimate Mishima son, Alisa Bosconovich, rumored to be the daughter of Dr. Bosconovich, cybernetically enhanced with jet engines, chainsaw arms, and even uses her head as a bomb.
NANCY-MI847J, a bonus boss character, and Azazel, the final boss in the game. While not as frustrating as Jinpachi Mishima in Tekken 5, he still provides quite a challenge.

All 42 characters are customizable via purchases that are done with money earned during various game modes. However, with the exception of one mode, getting enough to make purchases takes forever. As a result, there is the Scenario Campaign mode. Centering around the new characters Lars and Alisa, it is a 3D brawler maintaining the standard Tekken control scheme. In doing so, this mode is a mess. Fighting can get quite frustrating, and changing between targets is too cumbersome. After finishing Scenario Campaign and getting enough money, you’ll never go back to it, and instead, stick with what makes Tekken 6 great, the actual fighting!

Another new feature is that the fighting can now be taken online, and for most of the time, the result is very smooth. Only once or twice when I played did I have a disconnect issue, and I had hardly any in game slowdowns. Tekken 6 also adds something that I wish other fighting games would include: in-game lobbies. The lobby I tested worked out great and I had no issues at all with people jumping in and out.

For being the first Tekken game to come out for this generation’s hardware, the translation looks pretty good. The biggest addition to the visuals is the addition of motion blur which looks decent, even more considering the 60 frames per second speed is never compromised, but there is a touch of jagginess as a result. Removing the motion blur seems to remedy the jagginess, but why would anyone want to do that?

In addition, the Tekken series has always been known for a great soundtrack, Tekken 6 is no exception. Same can be said for the multilingual dialogue. Still, I have to wonder why some non-Japanese characters (such as Alisa) are speaking Japanese? I would say the same thing for Lars, but if he is an illegitimate Mishima, it might make sense.

Tekken 6 carries on a great fighting series. Even with the frustrating Scenario Campaign there is still a lot to enjoy for fighting game fans and I don’t see any future "Lords of Tekken" having any faults with this one as they continue their quest to air juggle the competition.

PROS: 42 characters, all available out of the box! Maintains the fighting style that Tekken fans know and love. Online very smooth most of the time. All characters are fully customizable.

CONS: Scenario campaign is tedious, controls horribly, and unless you play it, getting money to customize your characters takes forever! Aliasing issues when playing with motion blur on.