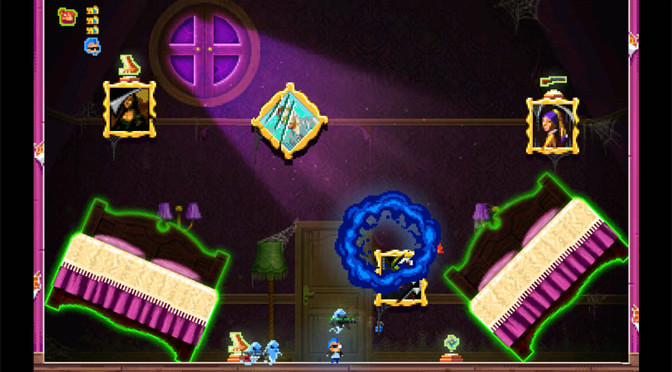 Fighting doppelgangers is nothing new to gamers. At some point, anyone who’s played an RPG or action game has wound up fighting an exact replica – or close comparison – to a player-controlled character. It makes sense to be so common in games; the main character is usually a formidable force, and it causes players to think how the best way to fight themselves would be.

Extreme Exorcism takes this idea and throws it into the copy machine over, and over, and over again. A 2D action-platformer, the game starts players on a single stage fighting a possessed chair. Using the numerous melee and ranged weapons that spawn throughout each level, players have to destroy the animated seat.

Simple enough, but then the fun begins. Upon breaking the chair, Extreme Exorcism shows off its simple, devilishly tricky selling point. As the next round starts, the chair is gone, and players are left to fight a ghost that mimics every action taken in the prior round, cycling in a loop until it’s killed.

Still, it’s relatively simple – until the next round starts and players are left doing the same thing, albeit with the prior two rounds’ ghosts. Fortunately, players only have to banish the most recent ghost, which wears a crown for quick identification, in order to advance the stage. To throw the proverbial monkey wrench into the system, that last apparition doesn’t play by the rules and gets to move however it sees fit.

As the theme continues and the round numbers start to tick up, the game degenerates into a chaotic, frantic scramble as players’ prior actions start to take a toll. Further complicating matters, players can hold up to three weapons in a round, which all fire simultaneously. It’s a great tactic for eliminating ghosts in the moment, but be aware that every ghost-slaying strike now turns into a potential player-killing attack later.

It’s a brilliant, simple, elegant design that often left me asking myself, “Why did I do that before?” Adding to the challenge, as each round begins, players lose their weapons from the prior round, but the ghosts don’t.

Although most of the weapons function in a similar fashion, every once in a great while, the game spawns a set of highly valued purple wings which have the power of exorcism, permanently banishing any ghosts hit in the blast radius.

While all of this is well and good, Extreme Exorcism lacks any real pop to make it stand out from the crowd. There are a plethora of levels and weapons in a well-designed, pixilated art style, but the action on screen is generally so frantic that there’s not much time to take them in. The weapons all have a similar feel, too, with few exceptions.

Without online multiplayer, it comes down to gathering a few friends on the couch to experience any kind of human competition, otherwise players are simply left trying to unlock new levels and beat the scoreboard.

Extreme Exorcism offers up great potential for local play, but when it comes to being a single-player experience with any depth, it falls short. Still, the developers are to be commended for their novel gameplay mechanic that effectively pits players against themselves over and over again.

Extreme Exorcism earns a respectable 3 GiN Gems out of 5 for offering something new and exciting to the platforming genre, even if that element itself gets a bit repetitive over time.