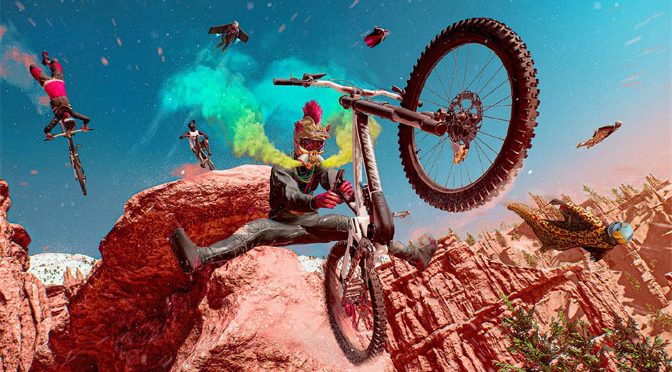 Art imitating art isn’t anything new. Movies, books, theater, music and every other form of artistic expression often takes pieces of or inspiration from what’s come before. Derivative work isn’t inherently a bad thing; it often takes a great concept and builds upon it in new, interesting ways, and video games are no exception.

That said, I was totally caught off guard by Riders Republic. My first thought upon starting the game was, “This is Forza Horizon with bikes, snowboards and wingsuits.” And that thought never left me in my time with the game. It’s one thing to imitate what’s come before you, but Riders Republic mirrors Forza Horizon in so many ways that it’s almost shocking. 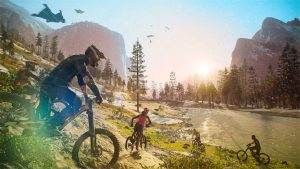 Everything from the map to the game’s overall presentation is Forza Horizon. The cinematics, the gear unlocks and even the premise (there’s a crazy festival/exclusive enthusiast community that exists and you’ve been invited to participate in its wild events) are almost a carbon copy of Horizon. That’s not to say Riders Republic isn’t different; of course it is. This is a game about extreme sports, and it functions well enough. But where Forza Horizon is a polished, vibrant world that manages to take the absurd and somehow still come off as serious, Riders Republic feels flat and at times even contrived.

The entire premise of Riders Republic is that there’s an extreme sports community based in an expansive national park area, and it’s been turned into a playground for downhill biking, skiing/snowboarding and wingsuit flying. The over-the-top, arcade approach is consistent throughout, which works in the game’s favor, but the presentation doesn’t match up. The game fluctuates between striking a somewhat serious tone and then playing into extreme sports stereotypes. Granted, this is done in a somewhat tongue-in-cheek manor (at least, I think), but I found myself cringing as I listened to the awkward dialogue and cheesy lines coming from some of the characters. 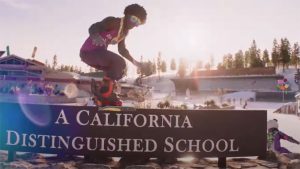 All of that could be forgiven if the gameplay were exciting and made the presentation more palatable, but this is the area Riders Republic struggles most. It’s not bad — but it’s not great either. It’s just OK. Downhill biking doesn’t give a tremendous sense of speed, and tricks and landings are far too easy to pull off, even when using the game’s manual landing mode. 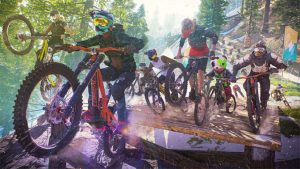 And unfortunately for Riders Republic, there’s another downhill mountain biking game that does everything in a far superior way: Descenders, which I reviewed a couple years ago. The sense of speed, power, consequence and technical skill required to play that game delivers the incredible satisfaction the genre deserves. By comparison, Riders Republic feels off. There’s little to no consequence for crashing, races are far too easy, and the bike’s physics are far too forgiving. 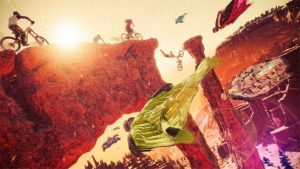 It’s the same thing with the skiing/snowboarding. I never got the sense of speed I should have felt. Maybe it’s the presentation of the camera or the field of view, but the only reason I knew I was going fast was because the little meter on the HUD told me I was. And the wingsuit gameplay was neat, but it felt like just another thing in a game that was missing that something special. 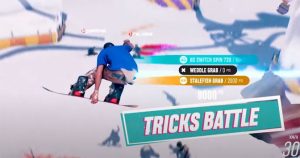 Again, I feel the need to point out that Riders Republic isn’t bad, and if you’re looking for a casual game to pick up and play with friends, this might be it. It’s got incredible visuals, with stunning, snow-covered slopes, beautiful mountain vistas and gorgeous topographical variety. It also offers a unique perspective of being able to play the game in first person if that’s your preference. 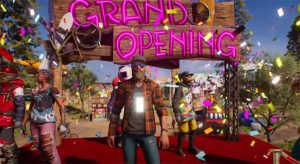 Playing the game solo pulls another page from Forza Horizon, where you can see other players in the open world. That makes the game feel livelier and complements its vivacious scenery well. The audio is good enough, too, but I can’t say there was anything that jumped out and struck me. It’s there, and it serves its purpose, but it never grabbed me and made me notice it. 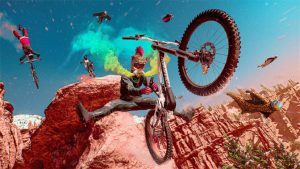 Riders Republic is a game about racing downhill, but ultimately, it feels a little flat. It’s not a bad game; it’s average. But in a game about extreme sports, average really doesn’t cut it.