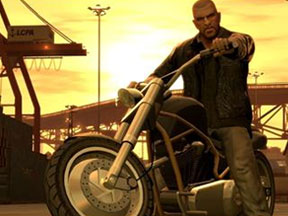 Grand Theft Auto 4 was a huge hit, and really showed how to make a nearly perfect open world on next generation consoles. But by now most of us have solved that game, leaving poor Liberty City a bit disused. So Rockstar smartly decided to bring new missions, characters and adventure into our fair city, and let us explore the lives of some of the more interesting people who live there.

The first adventure was The Lost and Damned, which has been out for lucky Xbox gamers for sometime. Now with the release of The Ballad of Gay Tony, Rockstar has extended the fun to everyone (PS3, 360 and PC) with a combo game that’s worth its weight in gold practically in terms of value. You now get both titles on a single disk, for about half the cost of the main GTA4 title when it was released. And if you’ve lost or traded GTA4 away, or never had it to begin with, have no fear. It’s not required to play these new adventures.

On the PS3, which is the platform used for this review, you need to load a lot of content the first time you insert the disk. After that, you are given a choice of which game you want to play when you start it up. TLaD and TBoGT have overlapping stories at points, and even the main characters will meet one another from time to time, but you can play the adventures in any order. I played switched back and forth and had a great time. Both stories also overlap the main GTA4 storyline, and yes, you will meet Niko Bellic and crew, and even remember some of the missions from GTA4, seeing them from a different perspective.

Almost the entire world of GTA4 is at your disposal for either game. Certainly the whole of Liberty City is there to drive, fly or boat around. A couple features here and there are disabled, like the fact that you can’t Internet date in TLaD. But for the most part, the entire open world you’ve come to love in GTA4, with its shady characters and hapless citizens, are present once again.

Both games are extremely well done, with TBoGT being slightly more polished. And both have a unique look and feel. TLaD is more combat oriented, for those who like to fight, especially on bikes, while TBoGT focuses a bit more on the story elements and generally has a bit better variety of missions.

Starting with TLaD, you play Johnny Klebitz, the vice president of The Lost motorcycle club, which is really a gang. Johnny is street smart and worldly, and has helped the club become profitable while running it for imprisoned leader Billy Grey. He’s even made peace with rival gang The Angels of Death, in order for both clubs to profit without stepping on each other’s toes.

The problem is that as soon as Billy gets out, he begins raising hell again. He only wants to have fun, and start wars. Johnny soon finds himself on the outs, facing internal political struggles within the gang, and a full-on war on the streets outside, not to mention several federal investigations into the gang’s activities.

The main missions in TLaD focus on Johnny trying to keep his gang together. To that end, he will do a variety of odd jobs, from political assassinations to drug dealing. Most of these missions involve riding bikes, and Johnny has a unique hog that spawns automatically for you at the start of most missions. Thankfully, motorcycle physics have been revamped. No longer will nudging a passing car send you flying to the pavement. In fact, you can sometimes hit a brick wall at high speed, only to bounce off to the side and remain mounted. It’s almost gone too far in the other direction, but at least makes high speed motorcycle driving a lot easier and less risky.

Because you are almost always given your bike for missions, there is not as much stealing of cars in TLaD. There’s simply no need, though you still can when wandering around exploring the city.

One new thing about TLaD over GTA4 is that you have to nurture your gang. This can be done through story missions, but also through gang wars. Gang wars are spots that pop up around the city that let you ride out and try to hunt down and kill Angels of Death. Gang members come with you on these missions, and if they survive, will get tougher and more accurate for future missions. However, if they are killed, they are replaced with green recruits with limited skills that needs to be trained up again. Doing the gang war side missions are a good way to get your gang tough enough to provide real support on the story missions. There are 25 gang war missions, so you won’t run out anytime soon. Most are pretty repetitive though.

Johnny does not seem to get as much money (or sometimes none at all) for missions as the main character in TBoGT or even your character in GTA4. However, he makes up for this by being able to call on his gang to deliver weapons vans filled with things to spend his money on. And the gang charges about half what the game’s standard stores charge. Johnny can eventually take on assassination-side (among other things) missions too, which although dangerous, end up paying very well.

The Ballad of Gay Tony takes us away from the dirty streets of Alderney to the glitzy clubs of Algonquin, right in the heart of Liberty City’s center island. In this game you play Luis Lopez, right hand man, business partner, confident and bodyguard for Anthony "Gay Tony" Prince. Prince owns both the hottest gay and straight clubs in the city, but has plenty of problems to keep Luis busy.

In a lot of ways, TBoGT plays a lot more like the original GTA4. There is a huge mission variety, from going on business deals with Tony (all of which seem to go horribly wrong) to helping out your friends from the old neighborhood, who happen to be drug dealers.

Side missions are no exception to the variety of TBoGT. Luis has to work in the clubs for instance, which is a heck of a lot of fun. Basically he patrols around the club looking for things that are out of place, and often has to eject people who are causing trouble. You are lead around by a girl named Joni who works the back room and talks in your earpiece. Sometimes Joni will even give you a great surprise of the sexy variety. The whole decadent atmosphere of night clubs are in full swing. Sometimes you are even given emergency side missions while on duty in the clubs. These can be anything from rushing off to get a supermodel a sandwich from her favorite deli, to hurrying a gay rap star out of the gay club before the paparazzi get photos and out him.

When you’re not on duty, you can hang out in either the gay or straight club, where all drinks are free. In the straight club, you can dance with girls and if you do well enough, rush off for a bathroom tryst in true warm coffee fashion. After that, the girl goes into your phone’s address book, and will occasionally send you naughty pictures and invite you to their house for a repeat performance. So really, Luis doesn’t date much either. He mostly skips to the happy ending part.

Luis also is a former cage fighter, and can battle in the underground ring for big profits. The cage matches are close to his mother’s house, and in typical mafia fashion, Luis can do no right in his mother’s eyes, though he supports her with gobs of cash. You even get to do some missions for your mom, as she seems to get herself into trouble from time to time. This makes Luis seem a lot more human as he balances the needs of his mom, his hapless employer and friend, and his old friends from when he grew up.

Both games feature new content in the form of television programs like Republican Space Rangers. There is even a totally new show called Princess Robot Bubblegum that’s pretty darn funny. And of course there is new music and new DJ tracks on the radio, and a handful of new weapons that are mostly handed to your characters as the storyline progresses.

Both games also feature multiplayer modes which are surprisingly easy to get into and play. I’m not much of a multiplayer gamer myself, but these were a lot of fun, accessible via your mobile phone, and seemed pretty balanced no matter what role you play on the various maps. Really, with hours and hours of new single player content (times two for both games) the multiplayer is just icing on the cake, especially for PS3 gamers who have thus far been left out of the expansion pack party.

It’s nice to see Rockstar not letting their open world go to waste. Liberty City is one of the best open world examples ever created, with its own radio stations, people, Internet and television. It would be a crime to let it sit disused, and offering two great games set there for such a low price makes for an offer that no gamer should refuse.