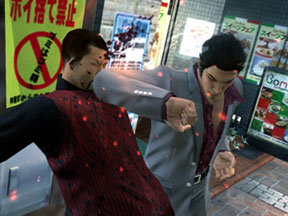 The Yakuza series has been loved by PlayStation gamers for a long time. However, it looked for a while like the series wouldn’t make the jump to the PS3 in the Untied States. Thankfully, Yakuza 3 was translated into English (with several overly-Japanese areas removed from the game) and brought to the US through publisher Sega. As an exclusive PS3 title, it’s a good one that brings to mind some of the gameplay found in the Shenmue of old.

If you didn’t play the original game, or Yakuza 2, you’re in luck. A complete story synopsis can be viewed for both games. These are done using the original game graphics, so they look a little old, but should jog the memory of veterans, and get new players up to speed in about fifteen minutes.

You play Kazuma, the Dragon of Dojima, who became the chairman of the Tojo clan, only to give it up for a more peaceful life away from the gangs. Kazuma has always been a noble character, especially for a gangster. In fact, he’s more "good" than many of the non-Yakuza he interacts with. At the beginning of the game, he has left the fast-paced life in Tokyo for the backwoods beaches of Okinawa. He’s brought Haruka with him after the girl’s mother died in Yakuza 2. She calls him Uncle Kaz now. In fact, he’s the "uncle" to a lot of kids, because he’s decided to run the Sunshine Orphanage. Being an orphan himself, he really feels for the kids who live there, and they become a central part of the story as it progresses.

In fact, the first several hours of the game involves you playing and interacting with the children, which is done inside the orphanage or at the nearby beach. All the kids have personalities and problems, from bullies at school to being in love for the first time, to wanting to play baseball to needing more money to buy the things that kids generally want. As Uncle Kaz, you will help out and do what you can to put the kids on the correct path in life. A lot of this involves mini-games, which you will quickly learn is a theme in the game. Thankfully, they are all done really well.

Eventually something has to give however, since the game is Yakuza 3 and not "Daddy Daycare." This happens when suspicious characters start hanging out near the orphanage. Kaz follows their truck into town, and learns of a plot to take over the land the orphanage sits on to make room for a huge resort. Of course the Yakuza have their hands in the pie of this deal to make money, and powerful politicians are also pushing for a military base in the same area. The plot is actually extremely convoluted with many twists and turns, but boils down to having Kaz save the orphanage for the kids he’s charged with watching over. Along the way people will be murdered, his old clan will come to near-ruin, and many people will try to take out longstanding grudges against him.

One of the coolest things about Kaz is that he remains noble the entire time. Unlike most of the Grand Theft Auto main characters who turn evil over time, Kaz is never even tempted to do so. In fact, you will spend a lot of time helping out your enemies, and eventually turning them into allies. This adds a very Japanese flavor to the game, which combined with full Japanese dialog (with English subtitles) will really give you a feel for Japan and its culture. In fact, I even picked up some of the language along the way!

Don’t confuse noble with pushover. Kaz fights like a dragon when he must, which is pretty often. Walking around the streets, you are often accosted (sometimes every block) by Yakuza who don’t know who you are, con-men, and general thugs. Why they pick on Kaz so much is beyond me. He’s got to be the toughest-looking person on the street, yet everyone demands tribute from him, or tries to outright rob him. This triggers a fight, and generally, you will mop the floor with these guys.

Fighting is very well done. You have two basic punches/kicks. The first is a fast punch and the second is a finishing blow. Most low-level enemies can be dazzled and put off-balance by the fast punching and then knocked down by the finishing move. As you gain experience (from all the fighting) you will be able to improve Kaz in four areas. This leads to new moves, stronger punches and defensive tactics. Eventually you will be flipping people over your back, stomping on their faces after knocking them down and even beating the crap out of them with items in the environment like bicycles, milk crates, street signs and broken bottles. Kaz’s street-fighting style is very powerful and combines technique with an anything-goes attitude. However, he never kills anyone, though you would think that some of the punishment he doles out would be fatal. After each fight however, the enemy "apologizes" to Kaz and gives him money or other tribute – again a very Japanese way of doing business.

At different points in the story, Kaz will need to fight bosses. These are very much like the street thugs, but generally have more hit points and better fighting techniques. If you’ve upgraded your character along the way, you should be able to beat them, but some of the fights are pretty tough. Still, the game never gets out of hand in terms of fighting difficulty. I’m no Street Fighter type of player, but was never confused about what moves were available to me. Keeping everything set around a few buttons makes the combat fairly simple, but not overly so.

I wish I could say that Yakuza 3 was an open world. It’s not really in the way we think of a GTA title. I’ll call it a semi-open world. You are free to roam around within cities, but only within a fairly limited area that comprises several blocks in Okinawa and a much bigger but still limited area within Tokyo. Those are the two main areas you will visit, though there are several sub-areas that you can travel to from time to time.

Still, there is a lot to do within those places. In fact, you will probably spend more time doing the submissions than you will on the main plot. Given that it took me 39 hours to solve the game, that’s saying a lot. You can meet girls and go on dates, help random people on the street with their problems, become the hero of the marketplace by waging a campaign against thugs and a bunch of other activities that could almost be a game themselves.

In fact, one of the joys of Yakuza 3 is that there are lots of great games within the game. There is an excellent golfing interface for instance that plays as well as most of the dedicated golf games I’ve tried. Or you can shoot pool which again, is pretty much as good as any I’ve played. You can even play games in the Sega arcades, or try to win a stuffed animal with the claw machine Darts can be thrown, bars can be visited and there are several gambling parlors with everything from poker to blackjack to dice games to play. Many of these games are very Japanese in nature, so be ready to lose several hands before you learn the strategy.

Most of the mini-games are introduced during the story phase of the game, so you will get a tutorial on how to play. Even finding locker keys hidden around the world (which leads to sometimes minor and sometimes fantastic treasures) is a mini-game of sorts that you could obsess about. Some of the side missions, especially the dates, can involve mini-missions as well, as you need to take your girls out to sing karaoke or shoot some pool. Of course, each girl has problems too, which normally involves you having to beat someone up, but that’s all part of the fun.

Exploring the two main towns is a lot of fun, and you can get involved in some pretty cool plots by chance. Everything from slavery to automobile scams to lost treasure to being the star of a movie becomes the focus of some of your side missions. There are even dedicated side missions that crop up as part of the main story, where you can track down and help to "reform" former Yakuza hitmen. This is mostly done with your fists at first, as they need to be shown the error of their ways.

You can buy weapons for Kaz and even upgrade them, though it’s clear that weapons are secondary in this game. Every weapon has a limited number of hits it can dish out before it becomes useless. Guns too have limited ammo and no spare clips. Weapons can be repaired and guns reloaded, though both cost a huge amount of money. Weapons are best saved for boss fights, or to counter a really strong opponent who is also carrying a weapon, while your fists and martial arts moves are better for most fights. Thankfully, there are a lot of weapons lying around, or that can be taken off of guys you knockout. They only last for the fight they were obtained, though used strategically they can give you a huge edge. Normally I would go after a thug with a gun or a sword first, and then empty the clip or start swinging at his friends once they dropped the weapon. And if they aren’t carrying weapons, a handy bike or traffic cone seems to always be nearby.

The plot of the game is quite good. You will be on the edge of your seat for a lot of it, assuming you can keep it all straight. Enemies become friends and friends sometimes betray you, or seem to, only to become friends again. It’s all pretty complex, yet not too difficult to follow.

In the end, I really loved Yakuza 3. It has the right mix of action and adventure and role-playing. My favorite part of the game was just exploring the cities and taking in the flavor of Japan, plus getting entangled in lots of insane side missions. But the main plot is good too, just don’t be in a hurry to follow it. It may seem counterintuitive, but even if someone has been kidnapped or is in danger in terms of the main plot, you can adventure on side missions for hours on end and they will be fine when you get around to rescuing them.

Yakuza 3 offers a ton of value for the money. In fact, its one of the best PS3-exclusive titles that I’ve played. I’m sure it could be successful on the Xbox or even the Wii, though I’m not sure if all the content in the game could fit on one non-blu-ray disk. If you like role-playing and action, with a distinctly Japanese flavor, Yakuza 3 is your ticket to adventure.