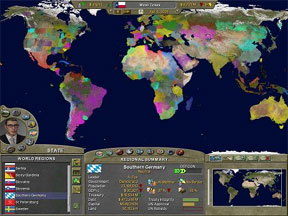 The concept of Supreme Ruler 2020 is that pretty much the world has deteriorated to the point that rock-solid nations like the United States have splintered into individual regions and sub-nations. Central governments worldwide have shrunk to mere fiefdoms, controlling only little slices of their previous glory. The game ships with an instruction booklet that explains why things went the way they did, but you don’t really need to know why the world got to this state. You just have to get it back out again.

To rule your chosen nation, or state as the case may be, you need to manage every single aspect of your country. Being used to games like Hearts of Iron with very complex interfaces, even I was taken aback at first at seeing what Supreme Ruler 2020 expected of me. Trade, diplomacy, the military, keeping your people happy with low priced consumer goods, building and construction, defense and just about everything else you can imagine is yours to control. Even issues like immigration and your gross national product are going to need some attention to detail here.

So of course this is another one of the "conquer the world" type of games. However there are three main differences that set 2020 apart from most others including its own Supreme Ruler 2010 prequel. And these differences make it a better game.

The main difference is the use of cabinet ministers that actually have some great intelligence behind them. The first time I can remember ministers being introduced in a strategy game is way back in Star Wars Rebellion, which was an ill-fated title that was so complex that you needed to assign droids to help you run things. But the droids only did what you told them with no imagination. Here, the ministers follow their own agendas to some extent, unless you completely lock them down and not let them do anything else. But trust me, that would be a mistake. The world is ever changing, and you need ministers to be able to compensate. The ones here are great, and almost never completely screw up, though occasionally they did things I didn’t want.

You see you have a general political strategy and a leaning, be it conservative, liberal or moderate. So do your ministers. And they have general personalities that hint at how they will run things. There is nothing so harsh as having someone stage a political coup d’ÃƒÂ©tat or anything like that, but if you put a liberal in charge of your defense, they might concentrate on garrisoning cities and buying more inexpensive units when you would rather they be building missiles and assault vehicles.

A happy medium in dealing with your ministers is to set goals for them. You might tell a minister to try and lower the tax rate for the citizens for example. That does not mean they will do that at the expense of everything else, but will generally put policies in place that won’t increase the tax rate, and perhaps bring it down slowly over time. This way you can have a hand in how your country is running without having to micromanage everything. Great leaders set the priorities and let others work out the details.

In fact, finding the right mix of ministers for your cabinet is paramount to your success here. That said, all the ministers are pretty good. In one game I was playing Germany and decided to go to war with Poland, you know, just so history could repeat itself. Before I knew it there was a full scale war going on and my ministers were sending tanks and troops to the front as well as building a huge war infrastructure on the back end. I let the game run for a long time and the war went well without me even touching it, even when other countries jumped in and came against me. Even then, we were holding off the other interlopers at the borders while concentrating on the front lines. I was impressed with the solid performance of the AI even under a lot of stress. And I am almost never impressed with an AI. It fought better than I could have on my own. I gave that minister a gold star and will look for him in future games.

The war brings up the second difference between Supreme Ruler 2020 and most other games in this genre. Here, diplomacy is really a valid part of the game. Every game like this says that diplomacy matters, but then it is given a backseat to warmongering. That is not the case here. You can really win (which means strengthening your nation) by trade, alliances and diplomacy. Of course the reverse is also true. Bad diplomacy can get you into hot water fast, even if it’s your allies who make the mistakes.

And finally, the user interface puts Supreme Ruler 2020 a cut above the rest. Sure there are a lot of buttons and a ton of numbers to look at, but given the complexity here, the interface is surprisingly smooth. And really, even if you are not very good at these things, you can easily find and give orders to your ministers, which is all you really need.

The graphics are not super-impressive, though they do look good. A German Leopard tank looks like it should, and not like a personnel carrier. It’s basically icons moving around on a 2D map, but you get all the details you need without a lot of flash, which some people would say gets in the way in any case.

Supreme Ruler 2020 is not for everyone. Despite the easy to use interface and extremely smart AI ministers who can help you run things, it’s still going to take some commitment from players to get over the steep learning curve. But once you get to the other side of that, this is one rewarding wargame, even if you never have to go to war.