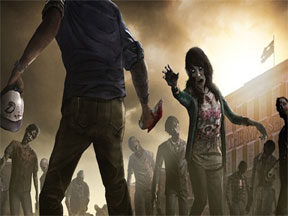 TWD Finishes With A Strong, If Short, Episode

For those who haven’t played episode four, I’m sorry but there are spoilers to be had in the next paragraph.

No Time Left drops us back into the game shortly after Lee has been bitten and Clementine kidnapped. Exactly as the title states, there is no time left and the group must act quickly to escape the zombie infested city and still save Clementine. I have to commend Telltale Games for the creation of Clementine, they created a perfect character for the player to care about and want to protect. That being said, Lee and the others will go to any length to get her back.

This final episode is one that will pull at the heartstrings. Sure all of the other episodes have their moments (episode three specifically), but No Time Left has all the emotional drama and story that I was wanting in the grand finale. The care that the player has for all the characters really comes to fruition in this final episode as we watch them do whatever they can to help us save Clementine.

One major complaint about this episode is how short it is. The other entries into the series lasted around four to five hours, which for five dollars an episode was worth it. Episode five however, only lasted for about two hours (Note: I’m including the time I spent going to grab a pizza into this time). This made it feel like Telltale was really just making us pay to see the end rather than to create another full episode for the player to enjoy. It still isn’t a bad deal to pay $25 for all five episodes as the game has lots of redeeming qualities. I just felt cheated with the final episode is all.

The lack of game time also left me with very few choices to make in game. The shining staple of these games are the hard choices made and the characters themselves. Even with the choices I did have to make, it felt obvious that my input didn’t matter for most of them and I was instead being lead by a leash toward my end goal.

Graphics in No Time Left are what I’ve come to know and love from the other four episodes, so I don’t really have any complaints there. Animations are fluid and one segment of Lee chopping his way through a hoard of zombies is especially satisfying.

The same thing goes for the audio as well. Characters are well voiced and sound effects are spot on, no complaints.

The Walking Dead Episode 5: No Time Left brings us a great ending to the first season with its well done story and gameplay. Graphics are what I’ve come to expect and the audio is up to snuff as well. Sadly though, it’s short in comparison to the other episodes, and many of the choices feel as if they are lacking the weight they had in previous installments. At the end of the day, it’s still worth picking up to finish off the series and for the added replay value it has with the other four episodes.